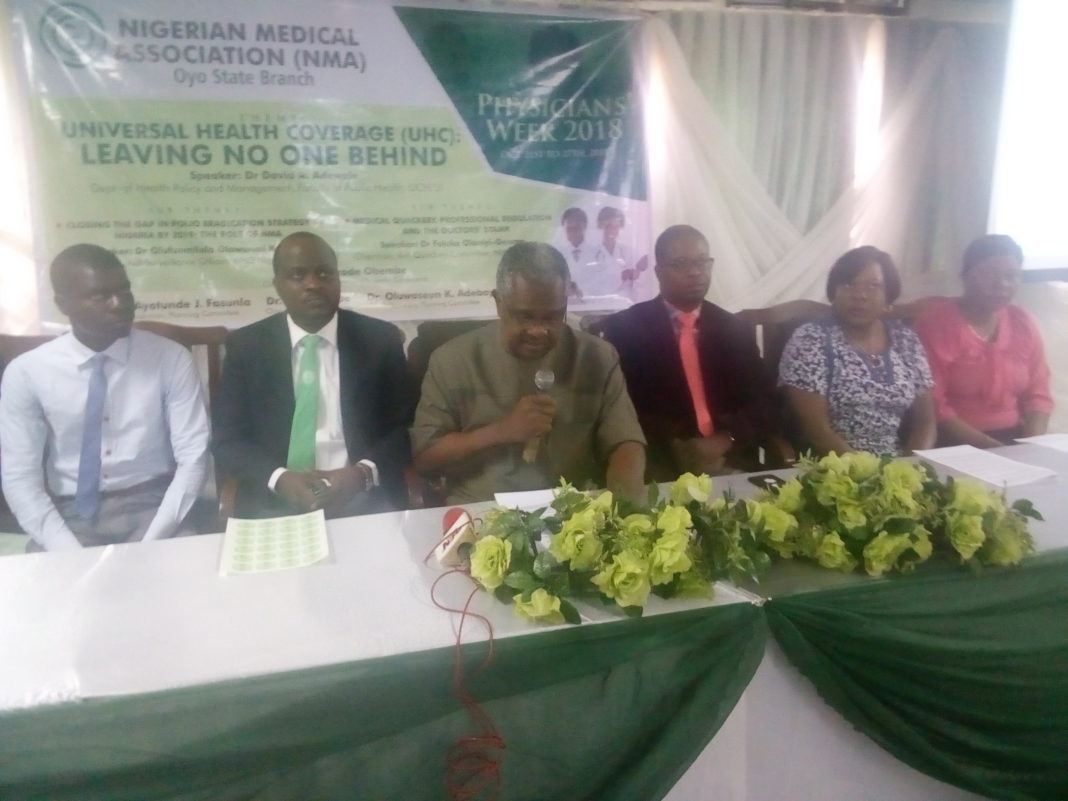 The Nigerian Medical Association (NMA), has on Tuesday cried out that security agencies are the ones frustrating the efforts of Medical and Dental Council of Nigeria (MDCN), NMA and other associations in a bid to rid the medical profession of quackery in Nigeria.

NMA Chairman in Oyo State, Dr. Akin Sodipo who made this disclosure while addressing journalists at a press conference heralding the 2018 Physician’s Week in Ibadan, the State capital, added that failure of the federal government to constitute the MDCN board was another reason why it is still difficult to tackle quackery in the medical profession in the country.

He said that, it was unfortunate that the security agencies that were saddled with the responsibilities to prosecute quacks have not been helping matters. Sodipo while speaking said, “Relevant sections of the Medical and Dental Act prohibits quackery in whatever form. It is also on record that previous efforts by the MDCN to prosecute suspects have been frustrated by security agencies that are saddled with such responsibilities. We also have cases where some of our state branches have raised alarm on the activities of suspected quacks and impersonators but the state security apparatus has not helped matters.

“Another reason for the inability of the MDCN to tackle medical quackery-related practices is the failure of the federal government to constitute the council. It is worthy of note that the act of setting up the MDCN reiterated that “The council shall be a body corporate with perpetual succession”, as clearly stated in the Medical and Dental Practitioners Act Cap M8.

“Despite efforts at eliminating or at least reduce quackery in the medical profession in particular and the health sector in general, the perpetrators of this illicit and dangerous act have continued to proliferate with its attendant consequences on the health of Nigerians. This informed the choice of the 2nd sub-theme, “Medical Quackery, Professional Regulation and the Doctor’s Stamp.”

Sodipo urged the federal government to as a matter of urgency constitute the MDCN and the Pharmaceutical Council of Nigeria boards in the interest of Nigerians.

He said, “We hereby once again call on the Federal government to urgently constitute the council of MDCN and its sister profession, the Pharmaceutical Council of Nigeria.

“NMA as the custodian of the people’s health believes that a sector that is not well regulated is prone to quackery and this have debilitating effects on the health care of our citizens.

Sodipo while speaking further added that the NMA introduced Doctor’s stamp in 2017 as one of the strategies in riding the medical profession of quackery.

He maintained that, “The NMA in line with best practices introduced Doctor’s stamp in 2017 to help check the proliferation of quackery and related practices. We, therefore, enjoined all medical and dental practitioners to key into this strategic anti-quackery measure in order to safeguard the health of Nigerians.

“We also appeal to government at all levels to join hands with the association in this regard.”