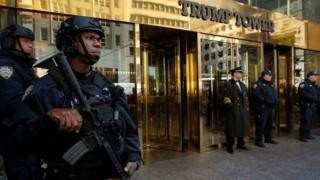 The Secret Service has moved out of Trump Tower in New York City to a street-level trailer in a dispute with the Trump Organization over a lease.

The federal agency which protects US presidents has been renting office space in the Midtown Manhattan skyscraper since 2015.

But its representatives are baulking at the cost and other unspecified rental terms, reports the Washington Post.

The Trump Organization said the agency should look elsewhere.

Since Mr Trump became a front-runner in the presidential race two years ago, the Secret Service has stationed its command post in a unit one floor below his triplex residence.

But its nerve centre was relocated in early July this year to a trailer 58 floors below on the street, it has now emerged.

Judge me on four things, said Trump. So we did

What has Trump said about your country?

Trump’s promises before and after election

What has the president achieved so far?

The General Services Administration, a government agency which arranges office space for federal employees, has been negotiating terms with the Trump Organization.

According to the New York Times, it was the president’s real estate company that objected to the insertion of a clause in the contract.

The Trump Organization did not clarify the sticking point.

But in a statement to US media, spokeswoman Amanda Miller said: “After much consideration, it was mutually determined that it would be more cost effective and logistically practical for the Secret Service to lease space elsewhere.”

Secret Service spokeswoman Catherine Milhoan told the Washington Post that it was continuing the search “to obtain permanent work space in an appropriate location”.

Mr Trump has not visited the tower since his inauguration, but his two adult sons, Eric and Donald Jr, often work there.

Security analysts say the distance could disrupt radio transmissions between the agents and the president’s family.

GSA spokeswoman Pamela Dixon told National Public Radio in an email that the agency does “not comment on projects in active procurement”.

The Secret Service is not the only government agency occupying space in Trump Tower.