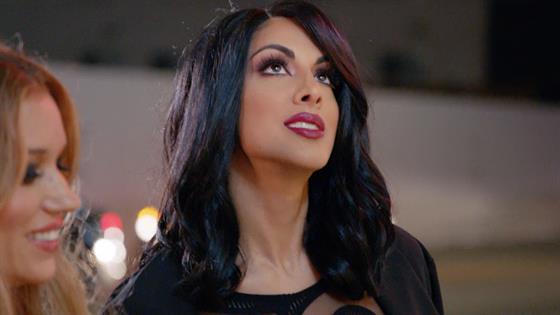 Let’s get this party started!

Katie Cazorla crossed the finish line to celebrate the grand opening of her business Hi SocieTea on Sunday’s season finale of Second Wives Club. It was finally the time for her to kick back, relax and enjoy the company of all her loved ones and friends, including Shiva Safai, Veronika Obeng, Shawna Craig and Morisa Surrey.

The festive evening was almost perfect until Tania Mehra showed up to the event unannounced expecting to be granted entry after failing to RSVP. After Katie went outside to confront her at the door, the ladies’ exchange quickly became a heated argument—again. Frustrated and fed up, Katie ultimately told Tania to leave in no uncertain terms.

But on a more positive note, the night was also a new beginning for Katie and her fiancé Walter Afanasieff. After a six-year engagement, she announced in front of everyone (minus Tania) that she was totally ready to walk down the aisle. “Next summer, I promise you that I’m going to marry you,” she told him. Aww!

See what went down in the Second Wives Club season finale recap video above!

Watch a brand-new episode of Second Wives Club Sunday at 10 p.m., only on E!