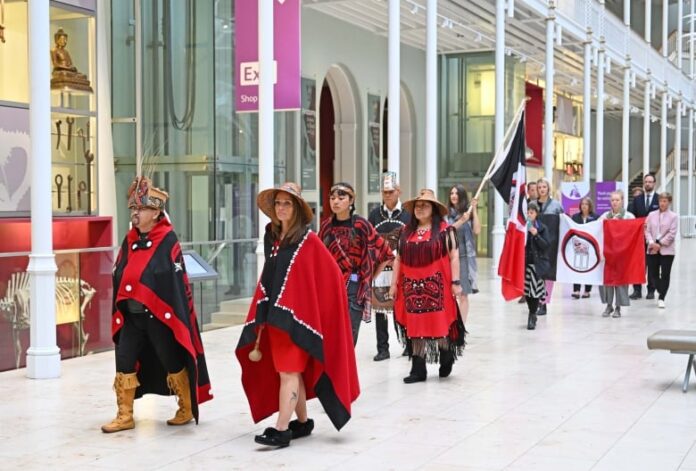 The National Museum of Scotland says it will return a memorial totem pole taken nearly a century ago from the Nisga’a Nation in British Columbia.

The museum says its board of trustees approved the First Nation’s request to transfer the pole to its home in northwest B.C.

A delegation of Nisga’a leaders travelled to Edinburgh last August to request the transfer of the 11-metre pole back to their territory.

Nisga’a Nation Chief Earl Stephens says in a statement their people believe the pole, which was hand-carved in the mid-1800s, is alive with the spirit of an ancestor, and it’s now coming home to rest.

‘A living constitutional and visual archive’

The Ni’isjoohl memorial pole is “a living constitutional and visual archive,” said Noxs Ts’aawit (Dr. Amy Parent), a Canada research chair in Indigenous education and governance at Simon Fraser University and part of the delegation that visited Scotland earlier this year.

“So to have it removed is like having someone rip out a chapter of Canada’s constitution and your most treasured family photo album and place it in a museum in another country to be viewed by foreigners on a daily basis,” she said.

The First Nation in northwestern British Columbia says colonial ethnographer Marius Barbeau stole the pole in 1929 and later sold it to the National Museum of Scotland.

The Ni’isjoohl memorial pole is a house pole that was carved and erected in the 1860s. It tells the story of Ts’wawit, a warrior who was next in line to be chief before he was killed in a conflict with a neighbouring nation.

In a statement released earlier this year, the Nisga’a said the pole “represents a chapter of the Peoples’ cultural sovereignty and is a living constitutional and visual record.”

It said Barbeau took the pole without the consent of the House of Ni’isjoohl — one of around 50 houses within the Nisga’a Nation — during a period when the Nisga’a Peoples were away from their villages for the annual hunting, fishing and harvesting season.

Chris Breward, the director of National Museums Scotland, says in a statement the institution is pleased to reach an agreement allowing the pole to be transferred to its people and the place where its spiritual significance is most keenly understood.