Wowplus
Home Communities Politics Scott Pruitt, outspoken and forceful, moves to the center of power within... 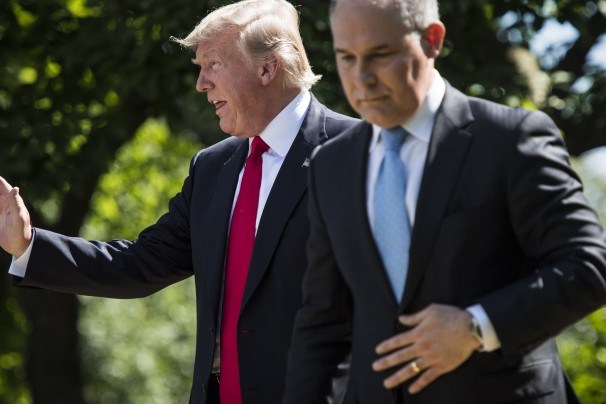 Less than four months ago, Scott Pruitt arrived in Washington with few connections to President Trump’s inner circle and took the helm of an agency where many employees were openly hostile to him.

But the administrator of the Environmental Protection Agency has emerged as one of the most influential policy architects in the president’s Cabinet, a skilled and sometimes brash lawyer who is methodically taking apart a slew of regulations and agreements affecting a range of issues, from manufacturing operations to landfills.

Many of these actions are works in progress: The United States’ exit from the Paris climate accord, which Trump announced Thursday, will take years, and EPA officials have just begun to rewrite many of the rules he has vowed to scrap. But their sweep — the most concrete manifestation of what the president vowed to do on the campaign trail — has come to define much of the White House’s domestic agenda.

Jeremy Symons, associate vice president of climate political affairs at the Environmental Defense Fund, an advocacy group, said that while Pruitt would appear “to be too far removed from the center of power,” he has already had an outsize impact.

How Trump is rolling back Obama’s legacy

In the wake of Trump’s Rose Garden speech Thursday — when Pruitt stood beside him at the lectern before delivering his own remarks — fewer people will make that mistake. Pruitt played a decisive role in convincing the president that it made sense to abandon the U.S. commitment to cut its greenhouse gas emissions under the 2015 international agreement. In doing so, the 49-year-old former Oklahoma attorney general effectively prevailed over Trump’s secretary of state, his National Economic Council director, and even his daughter and son-in-law.

Pruitt said Friday that climate change never came up as he talked with the president about withdrawing from the Paris agreement.

“All the discussions that we had through the last several weeks have been focused on one singular issue: Is Paris good or not for this country?” he told reporters, refusing to say whether Trump remains skeptical of global warming.

Several factors help to explain Pruitt’s rapid rise within Trump’s orbit. The administrator’s own agenda — to reverse federal policies that curb domestic fossil fuel exploration — meshes neatly with some of Trump’s central campaign pledges. Pruitt is better positioned to make headway than other Cabinet members, because so many of President Barack Obama’s climate policies were advanced through executive actions rather than legislation.

And over time, according to an industry lawyer familiar with the deliberations, the Oklahoma politician has learned that he can achieve more through forceful assertions. At the outset of the administration, the lawyer explained, Pruitt sought to soften the budget ax and get more political appointees on board by acting in conciliatory ways toward other senior administration officials. He quickly realized that was an ineffective tactic.

“The White House culture is much more: You go in hitting and attack,” said the lawyer, who spoke on the condition of anonymity to discuss the matter frankly.

John Walke, who directs the Natural Resources Defense Council’s clean air project, has been on the opposing side of Pruitt in federal court. The administrator is pursuing a strategy similar to what he did in Oklahoma when he sued the EPA on 14 different fronts, Walke said. Rather than asking the court to send the rule in question back to the agency to be rewritten, Pruitt always pushed to nullify it altogether.

“Mr. Pruitt has emerged as a foreman of a wrecking crew, rather than an architect,” he said. “It is easy to initiate that hostile agenda with a skeleton staff, press releases and instructions to Justice Department attorneys to file motions in court. That’s the easy part. The hard part is navigating the multi-year legal process to actually reverse legal protections, withstand the political outcry and to have those reversals upheld in court.”

Since February, the EPA has announced some two dozen major regulatory actions on climate, water pollution, pesticide use and other areas. Trump’s executive orders calling for the elimination of Obama’s Clean Power Plan and of a rule protecting small and intermittent waterways rank as the highest-profile moves.

The EPA is revisiting tighter fuel efficiency standards for cars and light trucks as well as standards that would cut emissions of methane, a potent greenhouse gas, from existing municipal ­solid-waste landfills. It has paused its first methane emission limits from new and heavily modified oil and gas wells; delayed when power plants must use up-to-date technology to reduce mercury and other toxins in wastewater; and stopped a ban on a commonly used pesticide, chlorpyrifos, just before it was set to be finalized. The agency is also seeking to delay oral arguments in two cases challenging its 2012 standard for air toxins from power plants as well as its 2015 smog rule.

Scott Segal, who co-chairs Bracewell LLP’s federal government relations practice and worked with Pruitt in recent years to reverse several Obama-era EPA rules, said the administrator combines “the care and wordsmithing of a trial lawyer” with a willingness to be outspoken in policy fights.

“He’s not afraid to express his point of view,” Segal said. “He’s a pretty bold guy.”

Pruitt has done extensive outreach to state and local officials, according to the EPA, including calls or meetings with 27 governors, six agriculture commissioners, at least three farm bureaus and 14 mayors. Next week he will travel to Italy to meet with other Group of Seven environmental ministers.

At the same time, the EPA’s budget could take a massive cut later this year. Trump has proposed reducing it by more than 31 percent — largely over Pruitt’s objections — and employees received an email Thursday informing them of upcoming buyouts.

“While I’m disappointed in what he’s doing [in Washington], I’m certainly not surprised,” said Edmondson, who is now running for governor in Oklahoma. “Pruitt’s positions are very similar to what the president enunciated during the campaign.”

At the EPA, the flurry of activity reflects what Pruitt has described as a “back to basics” philosophy, under which the agency will focus on priorities such as cleaning up Superfund sites rather than curbing carbon emissions. He has questioned the extent to which human activity is driving climate change.

Without question, Pruitt has a narrower view of his agency’s role than his Democratic and Republican predecessors did. During Pruitt’s confirmation process, Sen. Thomas R. Carper (Del.), the top Democrat on the Senate Environment and Public Works Committee, asked him in a written question whether there was a single EPA rule that he supported.

“I have not conducted a comprehensive review of existing EPA regulations,” Pruitt replied.

Stephen Brown, vice president for federal relations at the oil refiner Tesoro, said Thursday that Pruitt is working to bring EPA policies in line with the legal limits he and other conservatives believe the Obama administration openly flouted. Still, Brown added, the administrator recognizes the greater challenges that come with making regulations rather than striking them down.

“There are more minefields as a result of being on the inside than being on the outside,” Brown said. “And he’s smart enough to get that.”

Traditionally, serving as EPA administrator hasn’t been a launchpad for higher office. The post wasn’t even Cabinet-level until George H.W. Bush bestowed that rank on his EPA chief, William K. Reilly, in 1989, and Congress has consistently balked at making the agency a Cabinet department.

But Keith Gaddie, a University of Oklahoma political science professor who has written about environmental regulation, noted that Pruitt came into the state attorney general’s office “with very little litigating experience” but pursued an ambitious litigation strategy. Along the way, he proved himself to be “a really, really good politician.”

Standing at the center of power Thursday, with the president steps away, Pruitt hailed the U.S. decision to pull out of the global climate pact as “a historic restoration of American economic independence.”

“With this action,” Pruitt told Trump, “you have declared that the people are rulers of this country once again.”