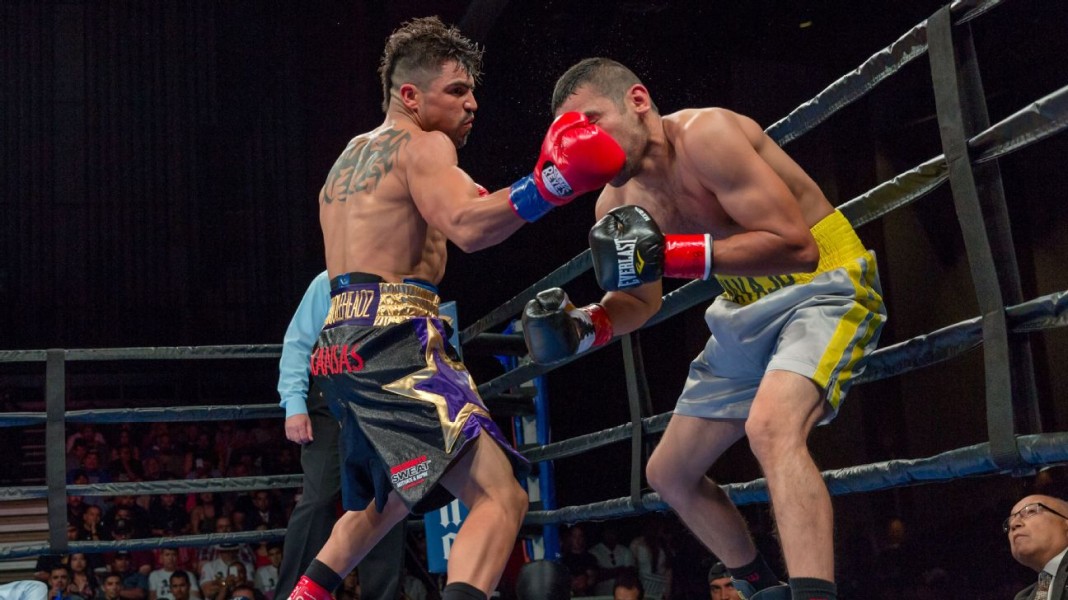 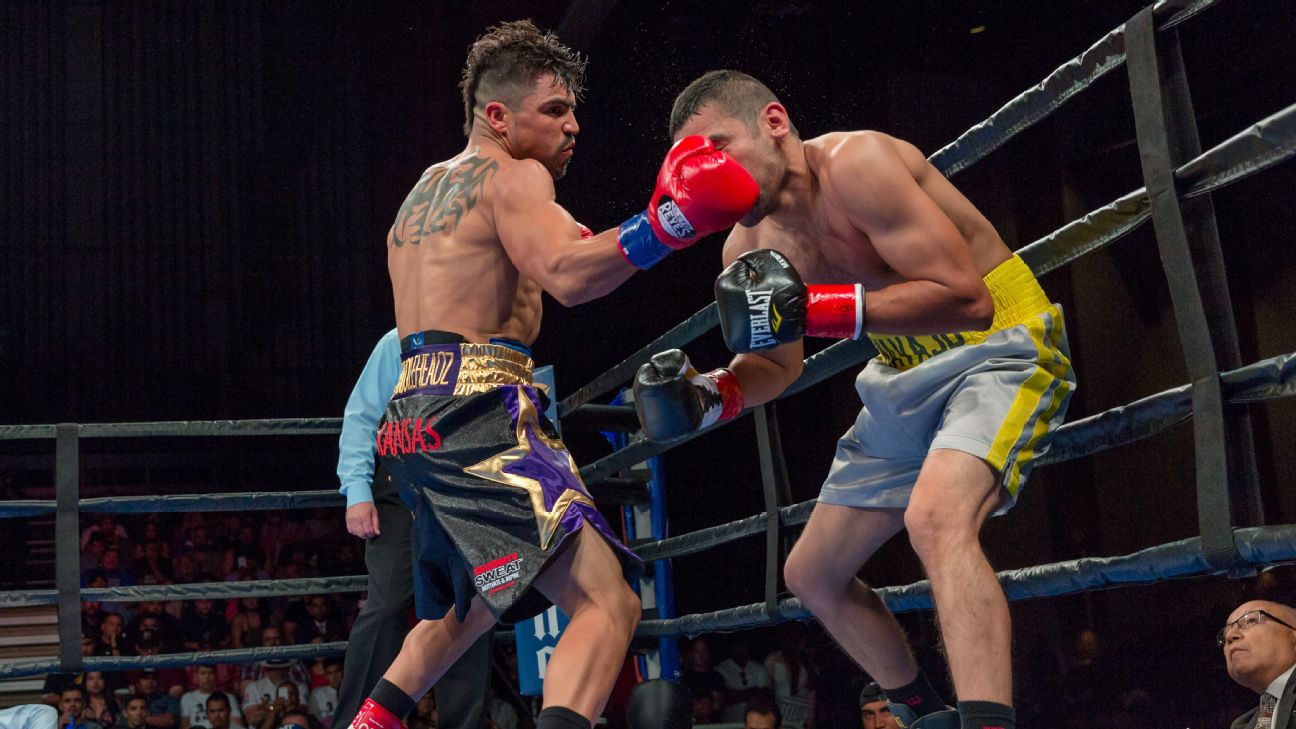 In his first fight in over a year, Victor Ortiz lands a strong left-hook to Saul Corral who falls to the mat. Corral would answer the 10 count but Ortiz finishes him off with more punches as the ref waves it off in the fourth round. Watch

Rafael’s remarks: Former welterweight world titleholder Victor Ortiz returned from a 15-month layoff and a fourth-round knockout loss to rival Andre Berto in their April rematch to headline a Premier Boxing Champions card against Mexican journeyman Corral and got the win he so desperately needed. Ortiz, now 3-4 in his past seven fights, claims he has a renewed hunger for boxing, is motivated by his son’s birth and believes the victory will put him on a path back to a title. That appears quite unlikely but Ortiz, 30, of Ventura, California, at least looked pretty good against an opponent made to order. Ortiz, a southpaw, looked sharp as he was on point with his straight left hand. After Corral lost a point for holding in the third round, Ortiz trapped him along the ropes in the fourth round and crushed him with a left hand to drop him hard to the mat. Corral got to his feet and Ortiz continued to blast him with unanswered shots until referee Jack Reiss stepped in at 1 minute, 26 seconds.

Rafael’s remarks: Gallimore, 29, who is from Jamaica and fights out of Evanston, Illinois, took the fight on short notice when former world title challenger Fernando Guerrero withdrew because of illness. Gallimore was the underdog but he took DeLoach, 23, of Augusta, Georgia, apart in an excellent performance. He bloodied DeLoach’s nose and dropped him twice, late in the first round when he hammered him with a left hook and again with a clean hook in the second round. DeLoach took a beating and when the fifth round ended he returned to his corner and collapsed, nearly falling off his stool, and the fight was rightly called off. Gallimore won his sixth fight in a row by KO and DeLoach’s seven-fight winning streak ended.

Rafael’s remarks: Balderas, 20, a 2016 U.S. Olympian from Santa Maria, California, turned pro on April 9 and scored a first-round knockout. He did it again in his second pro bout as he blitzed the Eder Amaro Fajardo, 24, of Mexico. Balderas was poised as he took out Fajardo with a perfect left hand to the body. Fajardo dropped to a knee in agony and referee Marcos Rosales counted him out at 1 minute, 36 seconds.

Rafael’s remarks: Lightweight titlist Garcia, 29, of Moreno Valley, Calif., who has world titles in three divisions, stepped up to 140 pounds to take on former four-division titlist Broner, of Cincinnati, who moved down from welterweight, and looked like the pound-for-pound level fighter most see him as. It was not at all competitive as Garcia rolled past the ineffective Broner. According to CompuBox, Garcia landed nearly double the punches Broner did (244-125) and also threw nearly double the punches (783-400).

It was not a good way for Broner to celebrate his 28th birthday (the day before the bout) but for Garcia, it was a huge win against his most famous opponent. The scorecards should have been wider. Broner has been outclassed in each of his defeats against his best opponents: Garcia, Shawn Porter and Marcos Maidana. Garcia, on track for fighter of the year consideration, did as he pleased and should figure in for a major fight either at lightweight, junior welterweight and he said he might even be willing to go to welterweight for the right fight.

Jermall Charlo finishes off Jorge Sebastian Heiland in the fourth round by TKO, after Charlo sends him to the mat with a strong left hook to the head. Watch

Rafael’s remarks: This was every bit the epic mismatch most expected when the contracts were signed as Charlo, 27, of Houston, a former junior middleweight titleholder making his middleweight debut, destroyed the inept Heiland, a 30-year-old southpaw from Argentina. Although Heiland came into the fight with a bum left knee, which he tweaked during the first round, he was never going to compete with Charlo even on two good pins. The talent and skill level were on different planets. Charlo did as he pleased, battering Heiland. He dropped him with a right hand in the second round and landed another big bomb in the fourth round to drop him again. Heiland limped to his feet but was badly unsteady and about to fall down again when referee Benjy Esteves waved the fight over at 2 minutes, 13 seconds. With the victory Charlo became a mandatory challenger for unified champion Gennady Golovkin.

Rafael’s remarks: Miller, 28, of Brooklyn, is a mountain of a man at 298.8 pounds and talks a game even bigger. But coming off an 11-month layoff because of a dispute with promoter Dmitry Salita, Miller looked good as he took apart ex-title challenger Washington, 35, of Vallejo, California. Although Washington’s last fight in February resulted in a fifth-round KO loss to titleholder Deontay Wilder, he still represented easily the toughest test of Miller’s career. Miller was ready, and after a slow start, clicked on all cylinders as he fought at a tremendously fast pace, especially for such a big man. He bombed Washington with both hands and laid a beating on him until Washington’s corner wisely threw in the towel after the eighth round. Miller is on the fast track to a title shot and could get there within the next two or three fights.

Rafael’s remarks: Taylor, 31, who won Olympic gold for Ireland in 2012 and also boxed in the 2016 Olympics, is one of boxing’s fastest-rising women. She already has a big fan base at home and made her United States debut in a showcase fight as she prepares for a likely world title fight before the end of the year. With a vocal contingent of New York’s Irish fans cheering her on, Taylor blew out Clarkson, 22, of Cedar Hill, Texas, as expected. Clarkson showed zero resistance as Taylor battered her from start to finish until Clarkson’s corner wisely surrendered at the conclusion of the third round.

Rafael’s remarks: In February, Warren, 30, the only three-time U.S. Olympic boxer in history, lost his bantamweight world title by competitive decision to Zhanat Zhakiyanov in his first defense in February. Cincinnati’s Warren returned to the ring for the first time since having dropped down in weight to face former titleholder Arroyo, 31, a 2008 Puerto Rican Olympian, for the right to move a step closer to a mandatory title shot against the Philippines’ Jerwin Ancajas (27-1-1, 18 KOs), who outpointed Arroyo to win the belt last September. Warren easily defeated Arroyo in the eliminator, tattooing him with quick combinations and body shots throughout the fight. It was an excellent performance from Warren.

Rafael’s remarks: Brooklyn, New York’s Ali, 28, a 2008 US Olympian, got knocked out in the ninth round challenging Jessie Vargas for a vacant welterweight world title in March 2016 but has bounced back to win three fights in a row, including this solid showing in a tough fight (that included a lot of accidental head butts) with former interim junior welterweight titlist Perez in the main event of the “Golden Boy Boxing on ESPN” card. Although Ali said after the fight he felt a little off, he had enough to get the victory over the aggressive Perez, 34, of Venezuela, whom he knocked down in the third round with a cuffing right hand behind the head that probably should have been ruled a slip or push.

Rafael’s remarks: Barrera, 30, of Mexico, had not fought since suffering a fifth-round knockout loss to Errol Spence Jr. in November 2015, but he returned for a mild upset win against former prospect Gomez, 24, of Bronx, New York, who lost for the second time in three fights. Although Gomez scored a knockdown with a left hook in the seventh round and also cut Barrera over his right eye in that round, Barrera was the boss for most of the fight and outworked Gomez for the close victory.

Rafael’s remarks: Known as “The Mighty Midget,” the 5-foot-4 Williams, 24, of New Haven, Connecticut, looked superb as he crushed Nicaragua’s Gonzalez, 36, with three knockdowns. Williams, whose mother was seeing her son fight live for the first time as he headlined a CBS Sports Net-televised card, deposited Gonzalez on the mat for the first time with a clean right hand. Then it was a flurry of punches that sent him reeling into the ropes, which held him up, for the second knockdown. Moments later Williams landed a brutal right-left combination, the left nailing Gonzalez on the chin and knocking him out. Referee Raul Caiz Jr. did not bother to count, immediately waving off the fight at 1 minute, 34 seconds. Gonzalez, who lost a majority decision challenging then-bantamweight titlist Joseph Agbeko in 2008, lost his second fight in a row, both by KO.

Also on the card, 21-year-old Brooklyn, New York light heavyweight prospect Junior Younan (13-0, 9 KOs) won a very tough, grueling fight against Mike Guy (9-3-1, 5 KOs), 36, of Sacramento, California, escaping with a decision on scores of 78-73, 76-75, 76-75. It would have been a majority draw had referee Wayne Hedgepeth not deducted a point from Guy for throwing Younan to the mat in the sixth round.

Rafael’s remarks: Mijares, a 35-year-old Mexican southpaw and former unified junior bantamweight world champion, won his eighth fight in a row since a decision loss challenging then-junior featherweight titleholder Leo Santa Cruz in 2014. In the ninth round, Mijares scored a knockdown against Hernandez, 34, of Venezuela, who dropped to 2-3 in his last five bouts.

Rafael’s remarks: Zou, 36, the two-time Chinese Olympic gold medalist and the face of boxing in his country, made his first defense by taking on hand-picked huge underdog Kimura, 28, of Japan, who was taking a huge step up in competition and pulled the upset. Zou, who before the fight parted ways with trainer Freddie Roach and promoter Top Rank, opened a cut over Kimura’s right eye in the third round and it bled throughout the bout. But Kimura, down 97-93 and 96-94 on two scorecards and head 96-94 on the third, came back in the 11th round. Zou looked exhausted as Kimura pounded him, finally driving him to the mat with an accumulation of punches. An unsteady Zou beat the count but he was in no shape to continue and referee Danrex Tapdasan stopped it at 2 minutes, 28 seconds.