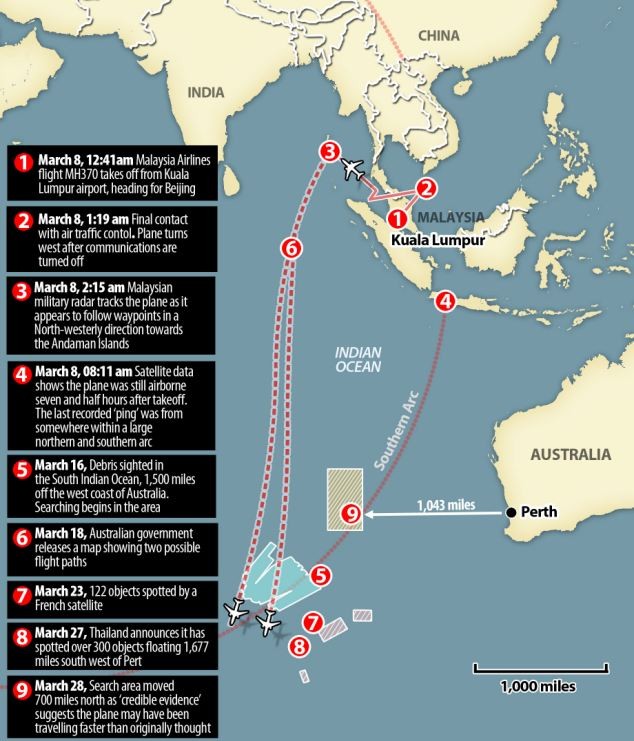 Canberra, Australia (AP) — Scientists have potentially narrowed the search area for the missing Malaysian airliner to three specific locations in the southern Indian Ocean, through new satellite and drift analysis of the 2014 crash released Wednesday.

But the Australian Transport Safety Bureau cautioned that the drift analysis by Australian science agency CSIRO is based on French satellite images of “probably man-made” floating objects without evidence that they were from Malaysia Airlines Flight 370.

But the locations could provide potential starting points to search within a 25,000-square-kilometer (9,700-square-mile) expanse identified by a panel of experts in November as the most likely resting place of the Boeing 777 and the 239 passengers and crew on board.

That expanse adjoins the original search zone far southwest of Australia that was identified through satellite analysis of the final hours of the flight that apparently ended when the plane ran out of fuel.

Malaysia, China and Australia agreed to suspend the deep-sea sonar search in January after 120,000 square kilometers (46,000 square miles) of seabed were combed without finding any trace of Flight 370.

The new analysis is based on French military satellite images gathered on March 23, 2014 — two weeks after Flight 370 mysteriously veered far off course during a flight by Kuala Lumpur, Malaysia, to Beijing and were taken near the original underwater search zone.

The Australian bureau took over the search for Flight 370 from Malaysia a week later. Satellite experts at Geoscience Australia were not asked to analyze the images until March this year. The experts concluded that a dozen objects appeared to be man-made.

The CSIRO then investigated where the objects might have originated before drifting for two weeks. The CSIRO identified three potential crash sites — 35.6 degrees S, 92.8 degrees E;

“So that is a way of potentially narrowing down the search area with the very important caveat that, of course, we can’t be totally sure that those objects seen in the images are actual pieces of plane,” CSIRO oceanographer David Griffin said.

“This might be a really good clue. It might be a red herring. But if you are going to search, then you’d be silly to ignore this potential clue,” he added.

The Australian bureau’s Chief Commissioner Greg Hood said in a statement: “Clearly we must be cautious” of the lack a definite link to Flight 370.

Malaysia, China and Australia have decided that the search will remain suspended unless new evidence pinpoints the wreckage’s whereabouts.

But seabed exploration company Ocean Infinity, based in Houston, Texas, said last week it has offered to launch a private search for the Malaysian-registered airliner.

Voice370, a support group for victim’s families, said under the terms of the offer made to Malaysia in April, Ocean Infinity “would like to be paid a reward if and only if it finds the main debris field.” They urge Malaysia to accept the offer.