Scientists Pinpoint How A Flamingo Balances On One Leg 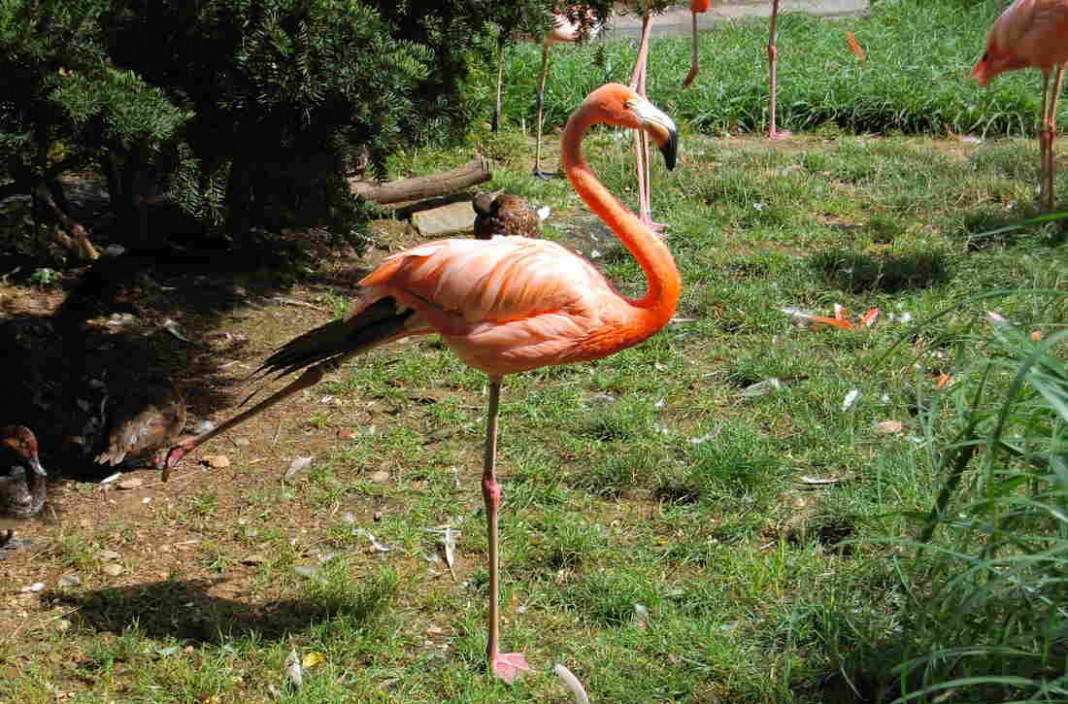 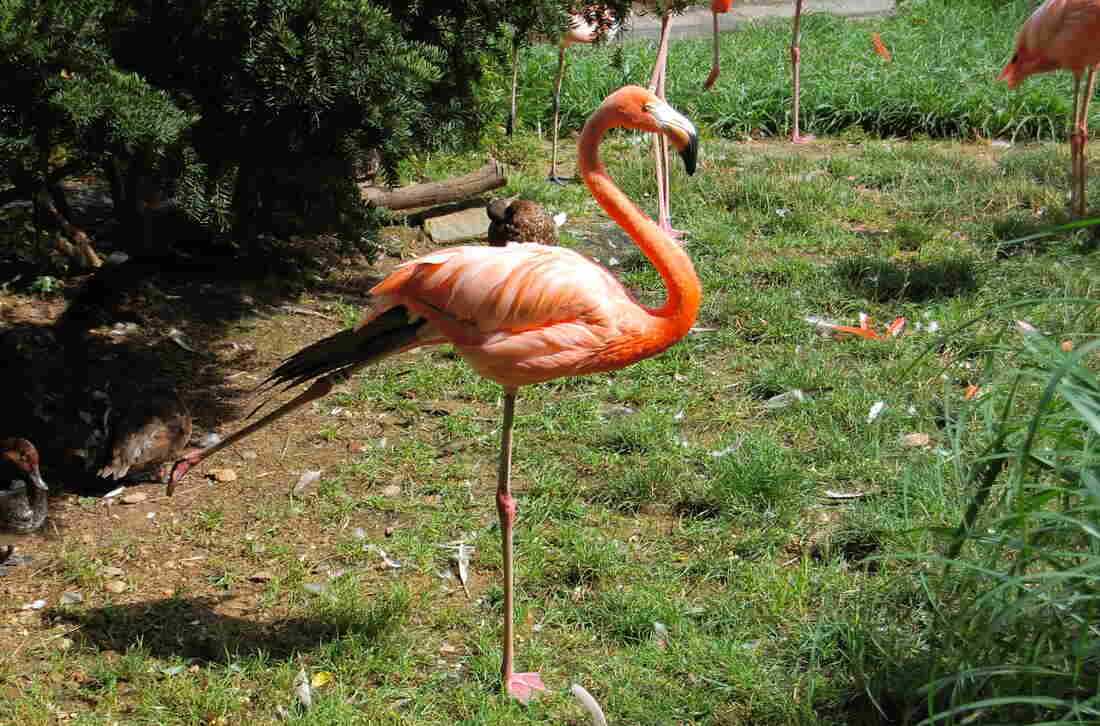 Scientists have now shown that this position requires almost no muscle activity from the flamingo. VSPYCC hide caption

Scientists have now shown that this position requires almost no muscle activity from the flamingo.

Most anyone who has encountered a flamingo has probably been impressed by its signature ability to balance on a single long, spindly leg for remarkably long periods of time.

But actually, scientists have now shown that what appears to be a feat requires almost no muscle activity from the bird.

In fact, they found even a dead flamingo’s body will naturally fall into a stable one-leg balance if positioned vertically. That research was recently published in Biology Letters.

Until now there have been two basic schools of thought about why a flamingo stands on one leg, Lena Ting, a biomedical engineer at Emory University and Georgia Institute of Technology, tells The Two-Way.

Some scientists have suggested it was a way for the bird to conserve heat that would have been lost if that foot had been in the cold water. Others thought it was a way to reduce muscle fatigue, letting one leg rest while the other did the work.

But for muscles to get fatigued, the posture must actually be tiring for the bird.

Nobody had ever tested whether the flamingo’s iconic one-legged posture required any actual muscle effort — until now.

Ting and co-author Young-Hui Chang from the Georgia Institute of Technology headed to Zoo Atlanta, where they tested eight juvenile Chilean flamingos using a device called a force plate. She compares the machine to a Wii balance board or a high-tech bathroom scale – it “can measure the small motions of the body when you stand.” 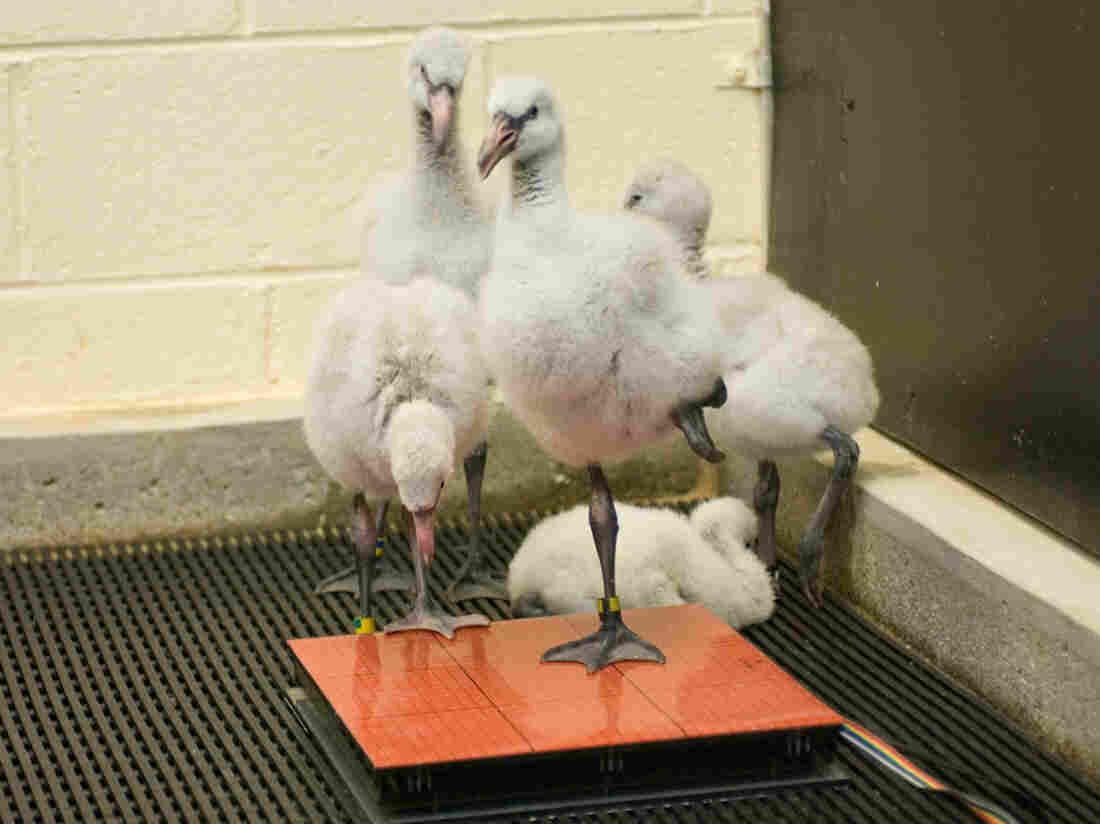 The researchers tested the movements of eight juvenile flamingos at Zoo Atlanta.

They recorded a small amount of swaying motion when the animals were awake. But then something surprising happened – when an animal dozed off, the swaying dropped off dramatically.

“And that’s the opposite of what we would expect for you or me — if I was standing on one leg and then closed my eyes, typically I would see a great increase in the amount of body sway and usually that results in people having to put their foot down,” she says.

It suggests that while awake and active, the bird’s swaying could be correcting for other movements, ultimately settling into a position while asleep that requires little to no muscle activity.

That was put to the test in an experiment with a flamingo cadaver, which of course has no muscle activity because it is not living.

First, the researchers tried manipulating the cadaver’s joint in search of a locking mechanism that could explain the stability, she says. But the joint moved very loosely and did not lock.

The key moment happened when they rotated the bird into a standing position: “We held onto its ankle … and we turned it vertically, and then all of a sudden it just collapsed right into the position that you see when they’re standing on one leg.”

This video shows the remarkable stability of the cadaver, even when it is pushed and pulled in different directions. (A warning to the sensitive viewer: It is a video of a dead flamingo, though the scientists say the animal was euthanized for other reasons and was not harmed for the study.)

This suggests that the reason for the animal’s stability is mechanical and is actually aided by gravity. “What we showed is that when they go to sleep their bodies can sort of flap forward due to gravity, and then the whole thing just collapses and becomes very stable,” Ting says.

The mechanics behind a flamingo’s leg are a bit counterintuitive. The flamingo actually has an upper leg bone that is positioned horizontally, hidden among its feathers. A knee connects that bone to the long, slender part that it stands on. And the knobby bit in the center of that vertical portion is actually the bird’s ankle.

When the flamingo lifts its leg, its body folds forward, so the center of gravity is pushing down on the leg from the front of the body — perfectly balancing it. 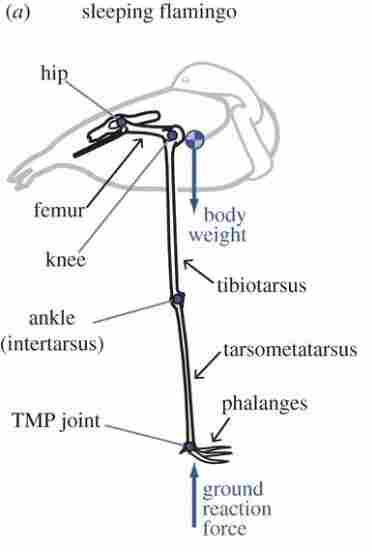 A diagram of the limb posture and anatomy of a sleeping flamingo. Biology Letters hide caption

In fact, says Ting, “our research also suggests that it may require less effort for the flamingos to stand on one leg than on two.” The bird was not able to maintain this kind of passive balancing on two legs; as Ting explained, when the leg unfolded the joint “sort of collapsed” from its more stable position balanced on one leg.

This study is not inconsistent with the idea that flamingos stand on one leg to reduce heat loss, especially if the bird doesn’t need to expend much energy to do so.

But Ting says it may be even simpler than that: They may just balance on one leg because it’s easier for them than any other way.

It’s worth noting that lots of other birds balance on one leg too, such as wood ducks and storks. Ting says this could be a “more general mechanism that many birds use.”