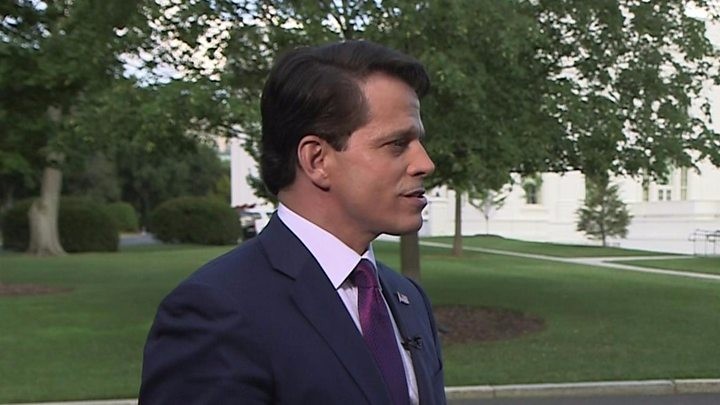 The new communications director for US President Donald Trump has launched a strongly-worded attack on the White House chief of staff.

Anthony Scaramucci was scathing about “paranoid schizophrenic” Reince Priebus, in a phone conversation with a reporter from The New Yorker magazine.

He was upset that the reporter, Ryan Lizza, had tweeted about who Mr Scaramucci was dining with.

The conversation with Mr Lizza was littered with profanity-laced insults directed at Mr Priebus and Chief Strategist Steve Bannon.

Mr Scaramucci later tweeted his regret at the “colourful language”. He did not deny the nature of the conversation as it was reported but said he “made a mistake in trusting a reporter”.

“It won’t happen again,” he tweeted.

Mr Scaramucci has spent much of his first week in the White House railing against “leakers” and hinted in interviews that he thinks the chief of staff is one of them.

“If Reince wants to explain that he’s not a leaker, let him do that,” he told CNN in a phone interview.

President Trump has said that leaks from the White House are a national security threat and must stop.

The West Wing bloodletting goes on

In his obscenity-laced interview, he clearly draws battle lines between himself and his White House opponents – Mr Priebus and Mr Bannon, in particular. His comments are going to make it difficult for the Trump administration to operate in any semblance of a normal fashion in its current composition.

The problem, however, is that it will be almost impossible to show Mr Scaramucci the door so early in his tenure – it would be a tacit admission the president made a mistake in hiring him. The I-told-you-so’s from the Priebus crowd would be deafening.

Mr Scaramucci could find some unrelated excuse to bow out – business concerns, perhaps – but that doesn’t seem the pugnacious New Yorker’s style.

The other option is for the West Wing bloodletting to continue. Given that Scaramucci dined with the president and Fox News firebrand Sean Hannity last night, before the latest round of “disruption” began, Mr Trump may be A-OK with this.

The tensions between two of his top aides appeared to be made public when Mr Scaramucci tweeted on Wednesday night that his government financial disclosure form had been leaked.

Mr Spicer announced his resignation on the same day that Mr Scaramucci was hired.

“I don’t know if [my relationship with Mr Priebus] is repairable or not,” said Mr Scaramucci on Thursday. “That will be up to the president.”

On his first day in the job last week, he told reporters that he and the chief of staff were personal friends who like to “rough each other up” once in a while. “But he’s a dear friend,” he added.

Sarah Sanders, the press secretary who reports to Mr Scaramucci, told reporters after the phone tirade surfaced that any apology would have to happen “personally between them”.

“He used some colourful language that I don’t anticipate he’ll do again,” she said of her boss. Ms Sanders had earlier described the nature of the two aides’ relationship as “healthy competition”.

Speaker of the House, Paul Ryan, who is the highest-ranking Republican member of Congress, told reporters on Thursday: “If those two men have differences, my advice would be to sit down and settle those differences.”