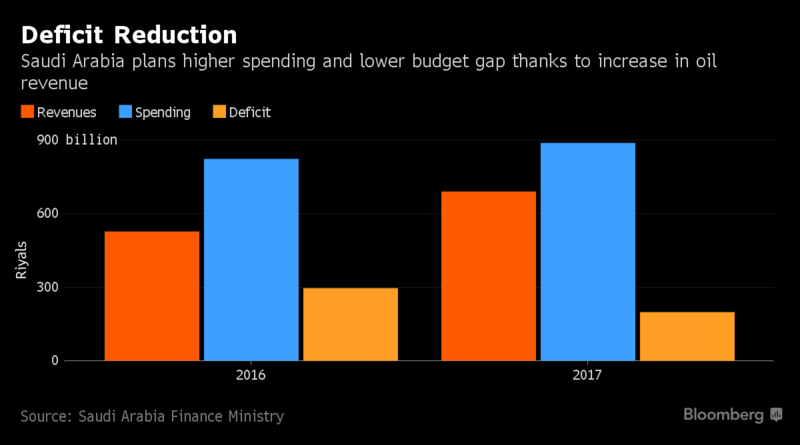 Total revenue climbed 6 percent in the second quarter to 163.9 billion riyals after income from crude jumped 28 percent, the finance ministry said in a statement. That helped narrow the deficit from 58.4 billion riyals in the same period last year, even though revenue from non-oil sources fell by 17 percent. Spending dropped 1.3 percent, to 210.4 billion riyals.

“It’s really a story of stronger oil revenue and ongoing fiscal restraint,” said Monica Malik, chief economist at Abu Dhabi Commercial Bank. “Much of the narrowing in the deficit seen in the first half of 2017 is due to higher oil revenue, versus in 2016,”

Saudi Arabia is reporting quarterly budget figures for the first time this year in an effort to increase government transparency, part of Crown Prince Mohammed bin Salman’s “Vision 2030” plan for life after oil. He has promised to overhaul the Saudi economy by cutting energy subsidies, privatizing state entities and selling shares in state giant Saudi Arabian Oil Co., known as Aramco. Raising non-oil revenue through taxes and fees is central to that plan.

The government said in December that it planned to spend a total of 890 billion riyals this year, with an expected end-of-year deficit of 198 billion riyals. The budget deficit for the first quarter was 26.2 billion riyals.

“Today’s quarterly update presents clear evidence of progress toward achieving fiscal balance by 2020,” Minister of Finance Mohammed Al-Jadaan said in the statement. “Whilst economic challenges remain, we are confident in achieving our fiscal deficit projections for 2017.”

Despite the government’s efforts to decrease its reliance on oil income, its share of overall revenue rose to 62 percent in the second quarter, compared to 51 percent in the same period last year, reflecting the rise in oil prices. Non-oil income fell in the same period largely because of a decline in “other revenues,” which include returns on investments by the central bank and the Public Investment Fund. Revenue collected from customs taxes and and other taxes, including the zakat religious levy, also declined.

Compensation for employees rose to 103 billion riyals in the second quarter from 94 billion riyals in the first quarter. However it’s unclear whether the data included the April restoration of benefits and allowances for government employees that had been cut. The finance ministry didn’t immediately respond to a question seeking clarity.

— With assistance by Shaji Mathew