Saskatchewan staved off bankruptcy in the ’90s. Is there hope for N.L., too? 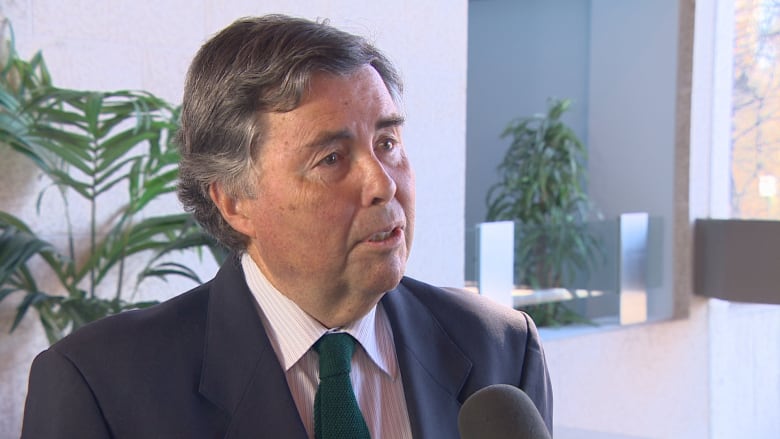 Roy Romanow says he still loses sleep over decisions he made 27 years ago.

The former NDP premier of Saskatchewan came to power amid a major debt crisis in the early 1990s, when the province was teetering on the edge of bankruptcy. The measures his government announced — massive cuts, including the consolidation of some 52 rural hospitals — reverberated across the province.

“I can’t tell you the number of times I would go to meet with the bankers in New York and in Toronto who wanted to see demonstrable proof that we were taking control of this huge imbalance of spending versus income,” Romanow told CBC News in a recent interview, noting that when Saskatchewan’s debt peaked at around $15 billion, interest rates were well above 10 per cent.

Like today in Newfoundland and Labrador — where emergency aid from the Bank of Canada helped stave off bankruptcy earlier this year — Saskatchewan faced ballooning debts and expenses, with no easy way out.

In the end, the province of about a million people got its finances back on track — with the price of painful reforms.

Almost three decades later, as Newfoundland and Labrador tries to regain control of its own balance sheet — the government projects net debt will reach $16.4 billion this year — what can Canada’s easternmost province learn from Saskatchewan’s decisions in the ’90s?

Regardless of their geography, there are similarities between the provinces. Both have relatively small, dispersed populations. Their economies are largely resourced-based. As former Saskatoon Star-Phoenix bureau chief Randy Burton put it, both see themselves as the “sad sisters of Confederation” — provinces perennially on the outside looking in.

But Moncton-based economist Richard Saillant also points to major differences — especially the sheer scale of problems faced by Newfoundland and Labrador. He said the province has a relatively less diverse economy and must now manage not only low oil prices, but also a multibillion-dollar megaproject-turned-boondoggle — the Muskrat Falls hydroelectric project.

“We’ve reached a point of no return in Newfoundland and without massive help from Ottawa, Newfoundland isn’t at the edge of a precipice, it’s already over the edge,” Saillant told CBC recently.

‘Austerity with a capital A’ hit rural areas hardest

Since September, Moya Greene, the former Canada Post and Royal Mail CEO, has been heading a committee that will chart the course for the “necessary change” Newfoundland and Labrador needs.

For Saskatchewan, that necessary change came in several forms: hundreds of positions cut, agencies and boards consolidated or axed, and the dismantlement of social programs such as universal dental care.

“No doubt about it, it was austerity with a capital A,” said Burton, who covered the Saskatchewan legislature for decades, including Romanow’s 1993 budget, when the NDP began charting the course toward balanced budgets.

We had a government on the brink of bankruptcy … and in the end, the solution was to cut. Where did they cut? Where the services were the most expensive, in the regions, outside the cities.– Stephen Kenny

In that budget, the province’s fuel tax, sales tax and corporate tax also went up. But University of Regina history professor Stephen Kenny says the most dramatic changes were felt in rural areas.

Kenny said the consolidation of 52 small rural hospitals became the symbol of Romanow’s reforms and represented the abandonment of rural life in Saskatchewan for many voters.

“We had a government on the brink of bankruptcy … and in the end, the solution was to cut. Where did they cut? Where the services were the most expensive, in the regions, outside the cities,” Kenny said in a recent interview.

The possibility of losing rural services — especially ferries and health care — has worried people in Newfoundland and Labrador for decades.

Sinclair Harrison, the former president of the Saskatchewan Association of Rural Municipalities who fought the hospital closures in the ’90s, said were he a resident of rural Newfoundland and Labrador today, he’d be wary of the government’s next moves.

“When it comes to votes, a major part of the voting public is in the larger centres,” he said Tuesday. “Most often the rural vote doesn’t really count for a whole bunch, and I’m sure it’s the same in Newfoundland as it is in Saskatchewan.”

While Romanow and Kenny caution that austerity isn’t necessarily a panacea for all that ails Newfoundland and Labrador, Saillant said the province may have little choice but to take drastic action if it hopes to obtain federal support.

Saskatchewan avoided bankruptcy without major help from Ottawa, Saillant said, noting the situation in Newfoundland and Labrador today is much more severe. The question, he said, is no longer whether the federal government will intervene, but how.

“Could Ottawa accept symbolic measures in exchange for a major federal aid package?” he said.

The Newfoundland and Labrador government has signalled it hopes to avoid painful cuts. But Premier Andrew Furey has also said nothing would be spared from Greene’s analysis. Recommendations from her committee are to be incorporated into the next provincial budget, which is expected in the spring.

Saillant said he expects the premier to use the report as “political cover” to justify possibly draconian decisions.

“There’s a huge cleanup to do and it won’t happen without some pain,” he said.

Furey’s government holds a minority of seats at the House of Assembly, and Burton warns that public consensus is important when governments make sweeping changes. When Romanow was swept into power in 1991, Burton said, the NDP won all but 11 seats in the 66-seat legislature — a clear message the electorate had rejected years of deficit spending from the outgoing Conservative government.

Kenny argued the 1993 NDP budget was the beginning of the “slow decline” of the party’s political fortunes in Saskatchewan — and Romanow said decisions made in the ’90s still resonate with disaffected rural voters. The Saskatchewan Party, which just won its fourth straight mandate, still campaigns on Romanow’s budget cuts, now almost 30 years later.

Romanow wouldn’t offer direct advice to the Furey government, but said communication with the public was key for his caucus in the ’90s.

“Looking back at it, most people understand if there is a critical circumstance. You can only run up the debt… for a certain time, not a long time, before you start really paying.”

“We have a duty to govern as best as we can,” he said. “If you get beaten over something, defeated over something which you believe is right, correct, principled, and you’re under tremendous pressure to do it on top of it all, at least you can go to bed at night and saying, ‘I lost the election, but I think I did the right thing for the province and for the country.'”