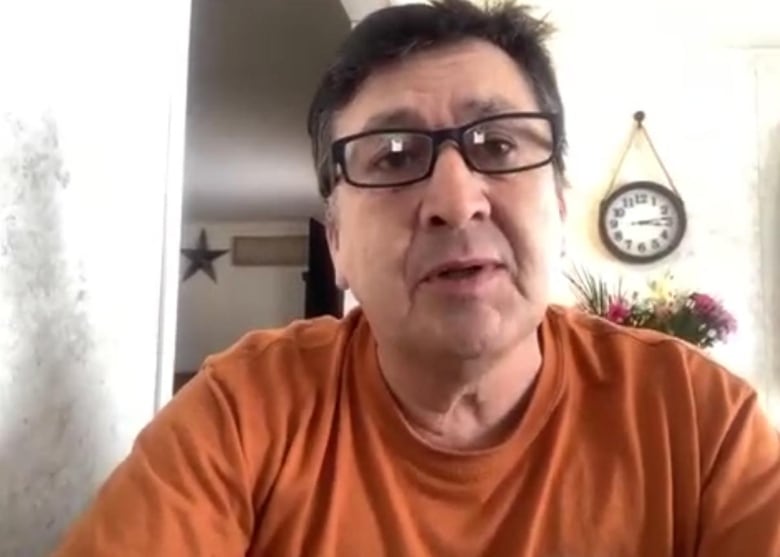 A northern Saskatchewan First Nation blockaded a road and issued a cease-and-desist order against a Toronto uranium company.

“It was very disrespectful, totally uncalled for,” Birch Narrows Chief Jonathon Sylvester said. “This is not being done properly.”

It’s unclear how the stalemate will be broken, but the case raises a host of legal, environmental and economic issues.

One academic said Canada’s Constitution and emerging case law is clear: First Nations concerns must be front and centre on any development affecting them.

“Certain behaviours or ways of doing business that might have worked in the past no longer work, based on a more robust understanding of how treaty rights and aboriginal rights need to be reconciled,” lawyer and University of Saskatchewan lecturer Benjamin Ralston said.

‘They can’t do this stuff to us’

Birch Narrows trapper and elder Ron Desjardin discovered the survey crew earlier this month on one of the community’s trap lines, 600 kilometres northeast of Saskatoon.

The area sits on the edge of the Athabasca Basin. It’s home to some of the world’s richest uranium deposits but also to endangered woodland caribou, lynx and other wildlife.

Desjardin called Sylvester to see whether he had given permission for the crew to begin its work. Sylvester had not.

A few days later, the Baselode Energy workers were again seen at the site. Desjardin told them they shouldn’t be there, particularly since the area was in lockdown because of a COVID-19 outbreak.

“Man, that really was infuriating because it was just so disrespectful. Just total disregard,” Desjardin said. “We’re not back in the 1800s anymore. They can’t do this stuff to us.”

A teepee blockade was set up across the road and Birch Narrows leaders issued a cease-and-desist order against the company.

Desjardin and Sylvester said it’s even more frustrating because it seemed the company was initially acting in good faith. The previous week, both sides had a meeting and agreed to talk more before any work began.

Baselode offered to build a cell tower for the community, but Desjardin said he told them it wasn’t a high priority.

“Also as a trap line area, we carry out extensive activity: trapping, hunting, fishing. We’ve done it for generations. It’s been passed down to us for a long, long time,” he said.

“We have people who have passed away on those trap lines, who have given up their lives on those trap lines in their struggle to feed their families. That area means a lot to us. It’s not just an ordinary piece of land. It has a lot of significance to us as a community.”

Stephen Stewart, the chair of Baselode’s board, said in an interview that the company obtained all necessary provincial permits. He said the initial survey would have next to no environmental impact.

Stewart said the company started work because it has to be done when the ground is frozen, but he acknowledged that waiting a week until after the second meeting with the First Nation wouldn’t have mattered.

“I will note that we are permitted to do this work, but permit and the consent of the community are different things,” he said.

“In any project that is in the extractive business, you absolutely need to have these local communities as partners. Not to be cliché, but it is a win-win for everybody.”

Stewart said he and his officials will work closely with Birch Narrows. He’s now promising the project will not proceed unless the First Nation agrees.

“There can be no project without the buy-in from the communities,” he said.

Stewart said in an email that the CEO of Baseload “maintains personal/professional relationships with chiefs, band members and community members.” CBC News asked to speak with one of them but Stewart declined.

Neither Saskatchewan Environment Minister Warren Kaeding nor Energy and Resources Minister Bronwyn Eyre was made available for an interview.

A provincial official emailed a response.

The official said Birch Narrows was given ample time to voice any concerns. Like Stewart, they said this is an exploration phase and there will be no drilling or digging.

The province takes the position that a traditional land-use study is not required by law. In the statement, the official said that “deliberately blocking Crown lands is illegal” and could be referred to the RCMP.

But law instructor Ralston of the University of Saskatchewan in Saskatoon said the Constitution and recent Supreme Court of Canada rulings make it clear that there is a “duty to consult and accommodate” Indigenous rights holders.

Those inherent and treaty rights override any provincial permit process, he said. That’s why provincial governments and resource companies are better off working in good faith with First Nations than risking a time-consuming, expensive court battle they may not win, he said.

“At the end of the day, Aboriginal and treaty rights are constitutionally entrenched. So if the process by which those permits were issued is in breach of the Crown’s obligations, then a court could invalidate those,” Ralston said.

The blockade is no longer up, but Birch Narrows members are patrolling the area regularly.

Trapper and elder Desjardin said they’re still willing to talk, but only if the government and Baselode treat First Nation’s members with respect.

“We were caught off guard, and we don’t want that to happen again. We don’t want people just moving in without a proper consultation process,” Desjardin said.

“We need to be able to have a dialogue. Let’s sit down.”