‘Everybody sees her exactly as a girl’: 9-year-old Sask. girl embraces identity through makeup, ribbon skirts 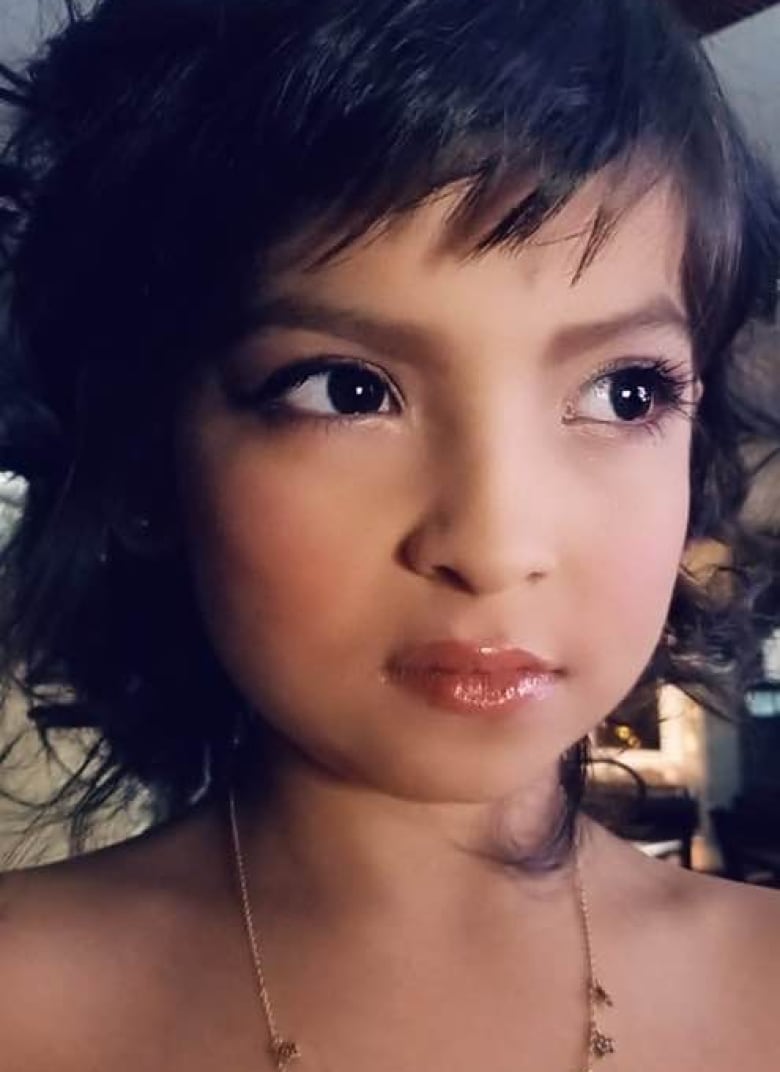 Reece Okemaysim was only four years old when she told her mother that she wanted to be a girl.

Up until then, Reece, now nine, was raised as one of seven boys to their single mother, Rozanna Seeseequasis, in Beardy’s and Okemasis Cree Nation in Saskatchewan.

“When she started coming out at four years old, she started playing with her auntie’s purses and high heels and wanting makeup,” said Seeseequasis.

“I didn’t discourage her by saying, ‘You can’t play with that,'” she said.

Reece also made her own clothing choices.

“She decided just on her own to wear pink and she got to choose on her own what to wear,”  Seeseequasis said.

“I did teach her about the ribbon skirt,” which are traditionally worn to Indigenous ceremonies and represent strength and womanhood, she said. “Now she likes to wear ribbon skirts.”

Reece told CBC about the first time she remembers wanting to be called a girl.

“She had a lot of purses, and I wore a bunch of shoes,” said Reece, who spoke with CBC by phone.

Her mother said before her daughter got on the phone for the interview, Reece ran into the washroom and put on lipstick and re-did her hair.

Seeseequasis knew how to raise boys, she says, but because she was not much of a “girly girl” herself, her daughter had to go to her aunt’s house to play with makeup and dress up.

Reece does both her own makeup, and her mother’s, and is always looking to social media for new makeup ideas.

“She’s getting better at it,” said Seeseequaisis.

The family community of Beardy’s and Okemasis Cree Nation, about 80 kilometres north of Saskatoon, was home to Saskatchewan’s first two-spirit Pride festival in 2016.

“She was grand marshal for the Pride parade in Beardy’s. She was six,” Reece’s mother told CBC.

“She had her own car to pick her up and drive her around, and they gave her money to buy a new dress.”

Reece said she likes wearing dresses and wigs, but sometimes feels shy about all the attention she gets for being who she is.

Community members and the people at Reece’s school are supportive, Seeseequasis said, and nobody sees Reece as a boy.

“Everybody sees her exactly as a girl.”

That wasn’t always the case, however.

Suzanne Seeseequasis is Reece’s chapan — great-grandmother in Cree. She acknowledges that when she found out her great-grandchild wanted to be addressed as a girl, she was worried.

“I had mixed feelings. I didn’t know … [Reece] wanted to be that way, so I just let it be,” said Suzanne, who has a gentle voice and laughs easily.

As a child, Reece “wanted to be grabbing mom’s makeup in the washroom, putting on makeup and wearing fancy clothes,” she says.

The great-grandmother said that she felt afraid for Reece’s future because of the stigma and violence that can follow transgender people throughout their lives.

“This is on my mind, and I get scared for [Reece],” said Suzanne, who was concerned some people wouldn’t understand, and would feel her great-grandchild was “not supposed to be that way.”

“When [Reece] grows up, what is going to happen?… That is always on my mind.”

Suzanne Seeseequasis is a survivor of St. Michael’s Indian Residential School in Duck Lake, Sask. She said that her generation never heard about two-spirited or LGBTQ people.

“It was like, ‘You can’t talk about that. It’s not the right way,’ because the nuns and the priests follow ‘the way it’s supposed to be,'” she said.

Seeseequasis has since changed her views on Reece’s identity after learning that there were always two-spirit people in Indigenous societies.

“We did have two-spirited people in our tribes,” said Reece’s mother. “When [Suzanne] heard that, she was like, ‘Oh OK.… And  now, that is her perfect baby,” she said.

“It’s amazing to see how she changed for her great-granddaughter.”

Reece also came very close to making her modelling debut in New York — but that was delayed by the COVID-19 pandemic.

Seeseequasis said she saw a call early last year for models for a two-spirit fashion show that was scheduled to happen in New York, organized by B.C. fashion designer Jill Setah.

“I asked if there was an age limit, because their previous shows had younger girls,” said Seeseequasis. The designer asked to see a video of Reece walking.

“It was going to be my first time on the plane and going to a big city,” said Reece.

As for the future, when asked what she wants to be when she grows up, Reece doesn’t hesitate.

“A police officer, because I can stop the bad people being mean to people.”

Reece’s mother said that she tries not to get in her daughter’s way.

“I just let her pick what she wants to be. Reece is a real big diva.”

“As a fellow queer kid, thank you for supporting and loving Reece,” said Shayla Jilleen Sayer-Brabant from Regina.

“I love all the supportive moms. It just made me cry,” said Seeseequasis.

“I saw some of the moms my age, some of them are not supporting. I didn’t want to do that to my baby,” she said.

Seeseequasis said that as a young person she was often judged and told that she could not do certain things.

“I want my kids to feel like nothing can stand in their way, and they can be whatever they want — and just be who they want.”

When asked about what future wishes she has for Reece, she says one word: