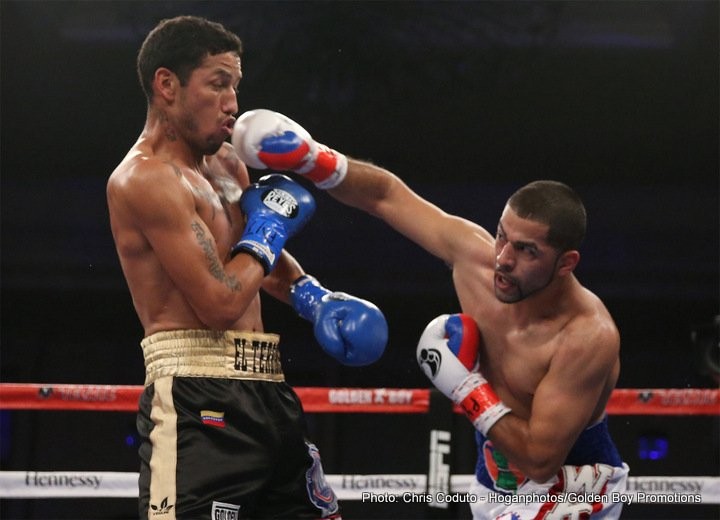 Brooklyn welterweight Sadam Ali wasn’t as impressive as he had hoped but fought well enough to win a unanimous 10-round decision over Johan Perez on Saturday night at the Casino Del Sol.

Perez, from Caracas, Venezuela, was aggressive throughout the bout but ran into counterpunches from the more skillful Ali, who scored a knockdown in the third round.

The 34-year-old Perez rallied to hurt Ali in the eighth round with a right hand to the head, but it wasn’t enough to turn the fight in his favor, and the fleet-footed Ali, 28, managed to stay out of trouble the final two rounds.

The bout was sloppy at times, and there were several accidental head-butts, resulting in cuts over both boxers’ eyes.

Although Ali deserved the victory, the scores of 98-91, 97-92 and 97-92 seemed generous toward him. According to CompuBox, Ali landed 95 punches, while Perez connected on 74.

In the co-feature, Mexican veteran Alejandro Barrera won a split decision over Eddie Gomez in a spirited 10-round welterweight bout. The victory was a minor upset, especially in light of the fact that Barrera took the bout on just two weeks’ notice.

The taller Barrera, who was having his first fight in 609 days, outworked Gomez, 24, with busy left jabs and slashing right hands. According to CompuBox, the former Mexican welterweight champ landed 185 punches, compared to 121 for Gomez. The victory raised Barrera’s record to 29-3 (17 KOs).

Gomez, from the Bronx, knocked down the 30-year-old Barrera in the seventh round with a left hook but couldn’t follow up. Gomez’s record fell to 20-2 (11 KOs).