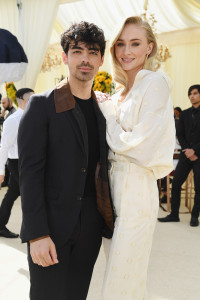 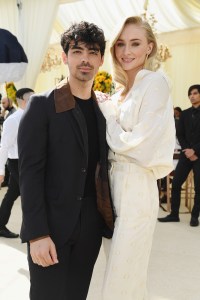 No one can resist Joe Jonas, right? Wrong! The Jonas Brothers member’s fiancée, Sophie Turner, hilarious shut down his attempt to get flirty on social media.

The DNCE frontman, 29, posted a silly video on Instagram on Tuesday, April 30, that showed him “spittin game” at a picture of the Game of Thrones actress, 23. “So, uh, where you from? Sweet! Yeah, I love the U.K.; It’s so beautiful,” Jonas quipped to the image. “Um, you heard of the Jonas Brothers? No? OK …”

The British actress played along with her fiancée’s awkward flirtation attempt and jokingly commented, “Try all u like slut u ain’t gettin this.”

The flirtatious clip was taken in the MGM Grand Garden Arena in Las Vegas, where Jonas and his famous siblings were rehearsing for their performance at the 2019 Billboard Music Awards. The awards show, which is being hosted by Kelly Clarkson, will air live on NBC on Wednesday, May 1, at 8 p.m. ET/PT.

Turner and Jonas were first linked in fall 2016 after they spent Halloween together and later were spotted getting cozy at a Kings of Leon concert in the Netherlands. The former Disney Channel star proposed to the Josie actress with a pear-shaped diamond ring less than one year later.

A source told Us Weekly in November 2018 that the couple will tie the knot in France in July. Turner previously revealed that her GoT costar and real-life best friend, Maisie Williams, will serve as one of her maids of honor at the ceremony.

The Camp Rock actor, for his part, told radio host Zach Sang that he learned one thing from brother Nick Jonas’ December 2018 wedding to Priyanka Chopra Jonas: “A lot of Coors Light is necessary.”

The duo’s nuptials will come one month before Joe, Nick, 26, and Kevin Jonas are set to hit the road with Bebe Rexha and Jordan McGraw for their Happiness Begins tour, their first since the group split in October 2013. “The moment we’ve all been waiting for,” the JoBros wrote on Instagram on Wednesday. “The #HappinessBeginsTour is coming to a city near YOU. Can’t wait to bring this show to life and hit the road with @beberexha and @jordanmcgraw!”