Russia raises doubts about UN probe of Syria gas attack Russia on Friday complained that UN investigators who this week traveled to a Syrian airfield allegedly used to launch the sarin gas attack on Khan Sheikhun did not take samples, a lapse described as “scandalous.” 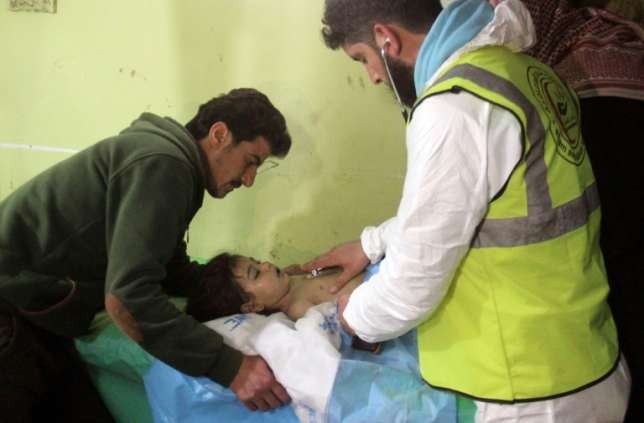 Russia on Friday complained that UN investigators who this week traveled to a Syrian airfield allegedly used to launch the sarin gas attack on Khan Sheikhun did not take samples, a lapse described as “scandalous.”

The team from the joint UN-OPCW probe, known as the JIM, traveled to the Shayrat airfield ahead of the release later this month of its much-awaited report that could lay blame for the attack on the Syrian government.

Russian foreign ministry official Mikhail Ulyanov told a briefing at the United Nations that four investigators visited the airfield, spoke to military personnel, checked flight plans, “but they did not take samples.”

“A reliable investigation is simply impossible without sampling,” said Ulyanov, adding that this was “a scandalous situation.”

Ulyanov, the foreign ministry’s head of non-proliferation, said the sarin attack at Khan Sheikhun was most likely caused by a bomb set off directly on the ground and not by a Syrian air strike.

The United States, France and Britain have accused President Bashar al-Assad’s forces of carrying out the April 4 air assault on the opposition-held village.

At least 87 people, including more than 30 children, died in the attack that drew global outrage over the use of banned sarin as a weapon.

A few days later, the United States launched a missile attack on Shayrat after concluding that Syrian aircraft, loaded with sarin gas, had departed from that airfield to attack Khan Sheikhun.

During the UN briefing, Ulyanov showed photographs of children with dilated pupils from sarin exposure that he said had been “poisoned” with narcotics “to heighten the emotions around this chemical incident.”

After showing video footage of rescuers who quickly arrived at the town, the official said he had the “clear impression” that the team was there “well before it happened,” suggesting it was staged.

Syria’s government has denied any involvement in the Khan Sheikhun attack and maintains it no longer possesses chemical weapons after a 2013 agreement under which it pledged to surrender them.

Russia, Syria’s ally, helped set up the JIM investigation to identify who is behind chemical weapons use in Syria.

Moscow however is weighing whether to allow the JIM to continue its investigations when its mandate comes up for renewal next month.

Ulyanov said Russia will study the JIM’s report on Khan Sheikhun, to be released on October 26, to “judge if it deserves the extension.”