Rosie O’Donnell: I Was Sexually Abused by My Dad When I Was ‘Very Young’ 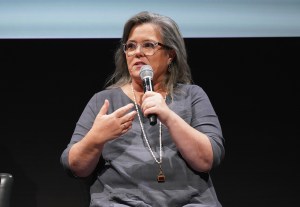 Opening up. Rosie O’Donnell claimed in a new book that her late father, Edward O’Donnell, sexually abused her when she was a child.

Per Variety, the former View host, 56, told Ladies Who Punch: The Explosive Inside Story of The View author Ramin Setoodeh that the alleged abuse began when she was “very young.” She explained that the abuse “sort of ended” after her mother, Roseann, died of breast cancer in March 1973, because her dad had to “take care of” five kids.

The Fosters alum noted, “On the whole, it’s not something I like to talk about. Of course, it changes everyone. Any child who is put in that position, especially by someone in the family, you feel completely powerless and stuck because the person you would tell is the person doing it.”

In January 2012, Rosie told CNN’s Piers Morgan that her father “had a lot of problems to deal with” personally, which put a strain on their relationship. She said, “He had his own issues and demons. He had a very tough childhood. He had an alcoholic, abusive father and never really got the help that I think every person needs when they have lived through that as a child.” Edward died of cancer nearly four years later. He was 81.

The comedian’s tumultuous family life later continued with her daughter Chelsea, whom she shares with ex-wife Kelli Carpenter. In August 2015, Rosie tweeted that her then-17-year-old daughter ran away from home. Chelsea, now 21, was found two weeks later in New Jersey with a man she met on a dating app. Chelsea later moved to Wisconsin to live with her birth mother, Deanna Micoley, but she and Rosie eventually reconciled.

“I missed the birth by, like, an hour,” the SMILF actress said on the Today show in January. “But she’s happy.” Rosie later revealed that becoming a grandmother is a “really beautiful” experience.

“It’s very trite, but it’s what everyone says — when you’re a grandparent, it’s like [having] a baby times a million,” she told Seth Meyers that month. “And that’s what it felt like.”

Rosie also shares sons Parker, 23, and Blake, 19, and daughter Vivienne, 16, with Carpenter, 51. She is also the mother of Dakota, 6, whom she adopted with ex Michelle Rounds.