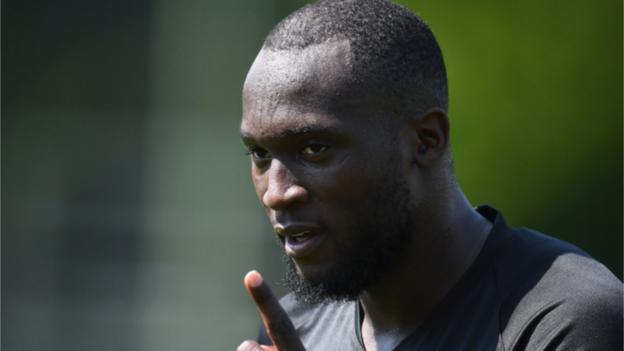 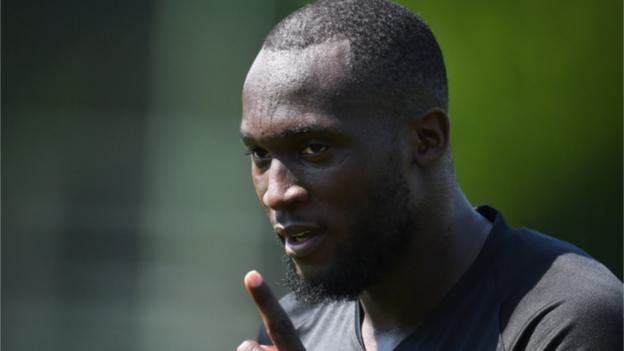 Romelu Lukaku has hit back at criticism from Gary Neville by saying the pundit should “never say I am unprofessional”.

The Belgium striker, 26, was also called “overweight” by the former Manchester United defender on Twitter.

Lukaku left the Old Trafford club this summer to join Serie A side Inter Milan for £74m on a five-year deal.

“Don’t question my professionalism,” Lukaku told BBC Sport. “I live for this game. I am at home all the time. I try to do everything to improve.”

In a wide-ranging interview with BBC Sport’s Simon Stone in Milan, Lukaku spoke about:

Former Chelsea and West Brom striker Lukaku joined United from Everton for £75m in 2017, scoring 42 goals in 96 games for the club – but managing just 15 last season.

And, after the appointment of Solskjaer, who replaced the sacked Jose Mourinho last December, he struggled to get into the team with Marcus Rashford preferred up front.

Lukaku said: “He (Neville) can talk about my fitness but he should never say anything about my professionalism, that I don’t work hard enough. That is something he cannot say. All the coaches I have had say the same thing about me.

“What did Ole Gunnar Solskjaer say when I was on the training ground? What did he say? That I always work hard and always do my best to try and improve myself. Same with Jose Mourinho and Roberto Martinez. Now Antonio Conte will say it.

“Last year was just a bad year. It happens in football. You just have to move on. I am not going to sit here and react in a negative way.

“We are grown men. He is a pundit. He gets paid to say this kind of stuff. I am paid to play football. I just want to do my best for Inter Milan. That is it.”

‘I will always be respectful to United’

Lukaku’s move meant he became the third most expensive signing by a Serie A club after the Juventus duo of Cristiano Ronaldo (£99.2m) and Gonzalo Higuain (£75.3m).

He joins a club which last won a trophy in 2011 when Inter claimed the Italian Cup, while his brother Jordan plays in the league for Lazio.

“I call myself a student of the game,” said Lukaku. “I try to watch as many games as possible. The tactical side was the most important thing for me to improve. I am 26 – I want to improve different aspects of my game.

“When I was growing up, Italy had Ronaldo, Adriano and Zlatan Ibrahimovic. They were three players I looked up to as a kid. For me that was really interesting.

“My brother is playing here. Playing at Inter Milan is a blessing for me. It is a club with a big history. It is hungry and wants to improve and do well. I was at a stage where I needed a new challenge. This one came at the right time.”

Asked what went wrong at United, Lukaku said: “I don’t know. I don’t try to look back at it. The way I look at it is that I beat all the odds.

“Coming from where I came from, growing up the way that I did, I think I beat the odds. No-one thought I would do the steps I have in my life as a professional footballer, only me and my family.

“For me, the Manchester United experience is one I am grateful for – not a good one because we didn’t win and I wanted to win with the club – but they gave me a chance.

“I got to play for one of the biggest clubs in the world, so I will always be respectful to them. At the end, I thought it was better for me to move on and try different things.

“I wish them well for the future. Now I am on my own path and I am very happy in Serie A.”

‘I really believe Sanchez will do well for us’

Earlier this month, Lukaku said he, French midfielder Paul Pogba and Chilean Alexis Sanchez were made scapegoats after United’s poor season in which they finished sixth in the Premier League and ended a second successive campaign without a trophy.

Sanchez, who played in Italy for Udinese, has since joined Lukaku on loan at Inter, while rumours persist about Pogba’s future at the club.

“That was my feeling at the time,” said Lukaku. “If you look back at it, I am not wrong. The thing about me is that I always speak the truth. What I think is what I am going to say. It is what I felt. It is what I saw.

“It is something I will always be grateful to him for. We had a conversation man to man. I told him how I felt and he understood. He will always get massive respect from me and massive protection.

“It is a good move for Sanchez. He played in this league before. The people here know him. In the Premier League he did really well when he was at Arsenal.

“He has had a difficult time at Manchester United. Coming here was the right move, in a good dressing room, where the manager wants winners who can really help the team. He is going to be part of that.

“He is going to add a lot of competition to the squad we already have. Now it is up to him to show it. I really believe he is going to do well for us. We are here to help him out. Hopefully, he can add that little spark to our team.”

On United’s pre-season tour of Australia and Singapore, Lukaku trained just once with his team-mates and in another session he watched on as they worked without him for 40 minutes.

Solskjaer had said that Lukaku “was not fit” but despite playing no pre-season games and missing a lot of training, the Belgian disputed the claims and said there had not been any fitness issues.

“I was training by myself for the last couple of weeks in Manchester with one of the physical coaches,” he said.

“From Singapore until I moved here, I was basically only doing running and not training on the pitch. When I got here they asked me what I had been doing.

“I had not done any group training, only running, so we kept the running part going. They introduced me to the group exercises and then they organised some friendlies and that was it.

“When I arrived, the first four days were about building up the physical aspect, getting as fit as possible for the first game – do a lot of physical work and adapt tactically to what he (Conte) wants on the pitch.

“How we play involves a lot of pressing, being in the right positions. You have to be alert and sharp in training.”

Asked if there was a fitness issue, Lukaku replied “no”.

Asked if he knew why United believed there was, he replied “no”.

Conte ‘is a nice man’

Lukaku joined former Juventus and Chelsea boss Conte in Milan, having called the Italian “the best manager in the world” in July.

He made a dream debut for the Nerazzurri, scoring on his Serie A debut in a 4-0 thrashing of Lecce.

“Obviously, he missed out on me when he was at Juve and at Chelsea but right now, it was the right timing and the right circumstances for me,” said Lukaku.

“I wanted to discover something else, a new challenge and play for a club that is hungry and ambitious to do the right things, with the right manager we have right now.

“I think we have to work hard day in, day out to achieve what we want to do in the end. We are making the right steps to improve.

“Outside that he is a nice man, somebody who is really motivating you, even when you are doing such hard work on the pitch. It is quite good and everybody is working really hard.”

The change in his demeanour from when I last saw him, slumped on a bench at Singapore’s National Stadium following another pre-season solo session ahead of Manchester United’s friendly with Inter could not be more marked.

There is a reason for that, apart from the warm temperature and blue sky he is likely to see substantially more of in Milan than he did in Manchester.

Lukaku has got his wish. A chance to play for a coach, Antonio Conte, he feels understands him, whose style of play suits his own and for a club he evidently feels is heading in the right direction.

The Belgian repeated his desire to win things a number of times. That he won nothing in his two years in Manchester was a source of regret.

But, by the end of his time at Old Trafford, the schism between player and club had grown so wide it could not be bridged, despite a goal contribution his former club do not have an obvious way of matching.

Lukaku felt, no matter what he did at Old Trafford, he would be criticised by fans and he was unconvinced by the club’s future direction.

As Lukaku put it “I just wanted to leave”. Now he has his wish, exiting with well-chosen words that will, largely, not irritate United.

But, what did the 26-year-old mean by this, which was dropped into an answer about the arrival of former United team-mate Alexis Sanchez?

“Coming here was the right move, in a good dressing room, where the manager wants winners who can really help the team.”