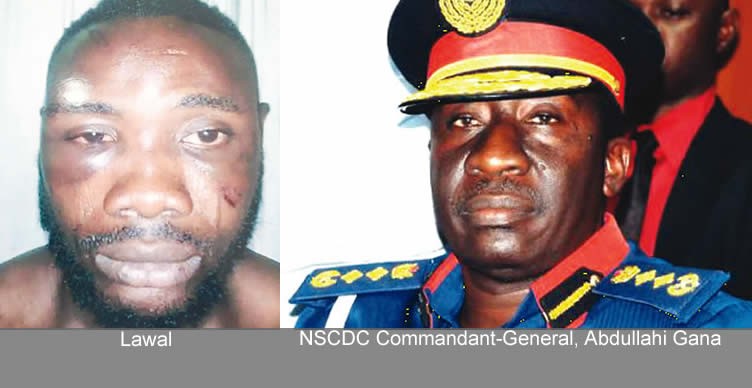 Two tanker drivers and a manager, who were robbed and tortured by 12 officials of the Nigeria Security and Civil Defence Corps, Lagos State Command, say investigations into the men’s conduct are slow and vague.

They said delayed justice would amount to sweeping the matter under the carpet and therefore demanded that the officials should be brought to book on time.

The victims also lamented that the corps had kept mum on valuables that the men stole from them at gunpoint.

However, the NSCDC said the erring officials had been summoned to the headquarters in Abuja to face another panel, adding that the items were being used as exhibits.

PUNCH Metro had reported that an NSCDC team had flagged down a diesel-laden tanker driven by one Lawal Amobi around 6pm on Friday, May 5, along Wilmer Road, Ajegunle, asking him to produce the product’s waybill and the operating licence issued by the Department of Petroleum Resources.

He had begged the team in vain that the licence was not with him and called the manager of the firm that he worked with, Tolu Oyinloye, who brought a photocopy of the document.

The officials reportedly seized the documents and demanded a N5,000 bribe, while the manager begged them with N500, saying the vehicle documents were complete.

They zoomed off in their van with number plate, CD 167 A01, after collecting N500, without releasing the documents.

The victims followed them in a motorcycle to Lacasera Bus Stop, Mile 2, Apapa-Oshodi Expressway, where they met another tanker driver, Abolore Ajiroba, being assaulted by another team of the corps.

It was reported that the men, apart from inflicting injuries on Amobi’s face and back, robbed him of two phones and a sum of N32,000, while the manager was dispossessed of N48,000, a wristwatch and an Infinix phone.

As Amobi and Oyinloye ran to escape the torture, the officials were said to have shot at them.

The Lagos State NSCDC Command had said the officials had been suspended while a committee’s report, which indicted them, was sent to the corps’ headquarters in Abuja.

Oyinloye told our correspondent on Wednesday that he and his colleagues had not heard from the corps since they were invited by the command to write their statements last week Tuesday.

He said they were given an official album from which they identified all the 12 officials, adding that justice should be served without further delay.

He said, “Instead of the command to bring out the erring officials to us, they gave us an album to identify them and we identified all of the command. Since then, we have not heard anything from them. I don’t know what they are investigating.

“They have not talked about our property. My passport, school identity card, phone and money were collected. If these people are not brought to justice on time, other criminal-minded officials won’t be deterred.”

Ajiroba said prolonged investigation into the case would jeopardise justice, adding that a sum of N5,000 the officials collected from him should be returned.

Amobi said, “I think the NSCDC is trying to manipulate the case. They have not said anything about the property those men collected from us. I want my phones and money back.”

However, the National Public Relations Officers of the NSCDC, Emmanuel Okeh, said the corps had to follow procedures because of the senior officers involved in the act.

He said all the operatives had been summoned to Abuja to face a committee, stating that the panel’s report would thereafter be submitted to a board in the Ministry of Interior for appropriate disciplinary actions.

“The NSCDC is not sweeping the case under the carpet. All the procedures must be met and the board, which comprises senior officers of security agencies under the ministry, will make final decision.

“The moment the report is concluded and it is established that they collected money and phones; they will pay back. Besides, the victims cannot have the items now because they are exhibits,” he said.