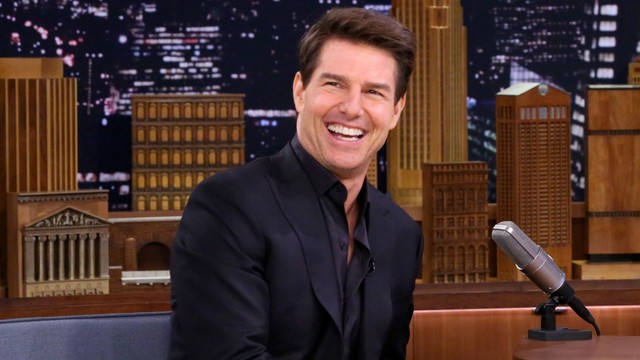 Robert Irwin has made quite an impression on Jimmy Fallon.

Less than two months after he appeared on NBC’s The Tonight Show, the 13-year-old returned to the show Wednesday with a few of his animal friends in tow. “We love having you on. You always bring really cool animals,” Fallon said. “It’s very informative, but also very scary for me.”

Irwin is about to go on an expedition with the Australia Zoo at his late father’s reserve, which is twice the size of Singapore. “With our crocodiles, we’ve caught over 150. I know that you can’t come with us, because you’ll be doing the show, but we’ve decided that the first crocodile that we’re going to catch we’re going to name Jimmy Fallon after you. You can actually go online and you can track Jimmy Fallon. You’ll see exactly where he goes,” he said. “It’ll be awesome!”

Irwin decided to show Fallon a “very cute and fluffy animal” to start: a 1-month-old North American badger. “They are quite feisty. In fact, in Africa the honey badger has been known to back down lions. They have no fear at all,” the conservationist said. “You see he’s got that really loose skin, so if an animal were to grab him, he can turn around and bite them. It’s really cool!”

After giving the animal some food, Irwin said, “You can see his nose there; he’s got a really acute sense of smell, so he can detect anything from a little, from a bird or maybe a little insect. They’re really, really good that way. See those little claws there, too? They’re great at digging. And when he gets older, in the wild, he would actually build a den underground and dig it out.”

“Do you have any stuffed animals or toys?” a nervous Fallon asked. “Like, plush animals?”

Next up was an alligator snapping turtle “Make sure you don’t get anywhere near his mouth, because he’s got quite a bite on him,” Irwin warned Fallon, handing him the animal. “When they get full-grown, they’ll easily be able to bite through human bone. He’s about 2 years old.”

“Ah! He’s moving his neck!” Fallon screamed. “How long is his neck?”

Irwin laughed and assured the late-night host, “You’ll be good!”

“We’ve got one that’s 100 years old, full-grown, that is ready to meet you. Does that sound good? This is one that you would definitely not want to get anywhere near his mouth. You can see on the end of his tongue, he’s got this thing called a lingual lure, and it looks a bit like a worm. He’ll cram himself under water in a little crevice and wiggle it around so a little fish might think it’s a food item. And then it’ll swim right up into his mouth, and then all of a sudden—wham!—he grabs the fish,” Irwin explained. “It is astonishing! Isn’t he just like a dinosaur?”

Irwin’s next animal was an 8-month-old kangaroo. “She’s a joey. She’s a baby kangaroo. And these guys, of course, occur in Australia. She’s actually quite small, but she will get a lot bigger. This particular species is the red kangaroo, and they’re the largest kangaroo species. You can see those legs—that’s what helps them jump. They can jump 30 feet in one single leap. It’s astonishing!” he said. As he fed the kangaroo using a bottle, he instructed Fallon to blow on her face. “That’s kind of how you introduce yourself.” Irwin offered to demonstrate for Fallon, who was initially hesitant to blow in her face. “That’s pretty cute,” Fallon said. “She gave you a kiss.”

Fallon was especially nervous about the last animal, which Irwin described as “a little bit feisty.”

“This one’s going to attack me,” Fallon predicted. “I know it. I can feel it.”

“The animal I’m about to bring out, it’s amazing. They are an African animal. They can get up to 300 lbs. and they’ve been known to kill adult lions. They’re amazing,” he said. “Are you ready?”

Fallon joked, “We might have to go tot commercial.”

Before long, three baby warthogs trotted out. “These guys are really, really young. They’re only a couple months old. But when they are full-grown, as I said, they’ll get up and over 300 lbs. in weight. And then they get older, they’ll develop these tusks. And the tusk is what helps them dig underground. They love eating tree roots,” Irwin said as he and Fallon fed them using bottles. “Aren’t they wild? The warthogs are just amazing. They’re one of my favorite animals.”

Unlike last time, Fallon managed to end the segment without getting bitten.