Riding out the pandemic on Lake Ontario 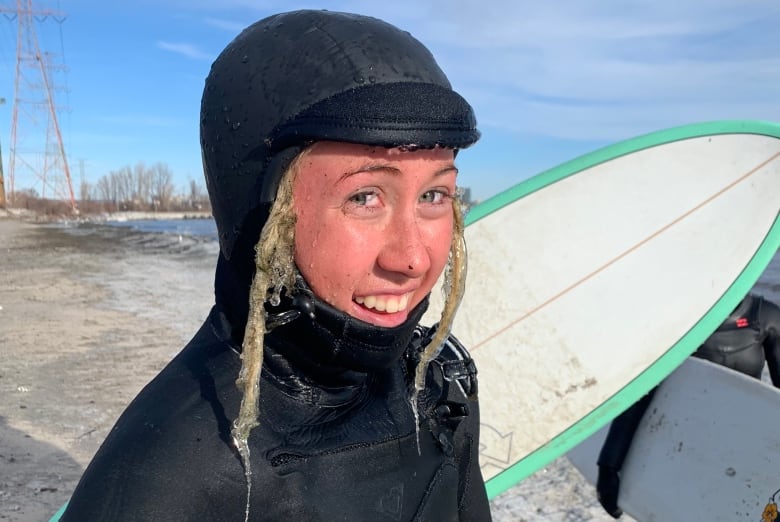 The pandemic has driven many Canadians deeper into their winter burrows to binge watch shows until warmer weather returns, but some have decided to plunge headlong into frigid water to wash away their COVID stress.

Sporting a puffy jacket and toque, paramedic Kristina Heino surveys the shoreline on Hamilton Beach, about 66 kilometres southwest of Toronto.

The winds have whipped up Lake Ontario’s gunmetal gray water. It’s -7 C, but it feels at least 10 degrees colder.

“We’re going to shred some cold waves,” she said. “Hopefully not get hit b bergs.”

Heino’s made a point of hitting the water with her surfboard, in all kinds of weather, to get her blues-busting fix of the lake since the pandemic began.

“The stress kind of accumulates over time, especially during a pandemic, and when I look at the surf report and I see waves or strong winds blowing, I get so excited.” she said.

Heino, who lives in Grimsby, about 84 km southwest of Toronto, is part of a loose-knit community that keeps a constant eye on the weather for opportunities to catch waves. They travel between Lake Erie and Lake Ontario depending on the wind direction.

Some, like Heino, are front-line workers. Others are dealing with the stress of being unemployed because of COVID.

Sam Macsai lives in Port Colborne, about 150 km southwest of Toronto, and works in the food-service industry.

“This is my second time being laid off. So I also work in the fitness industry. I’m a fitness coach, so I’m unemployed from both my jobs right now,” Macsai said. 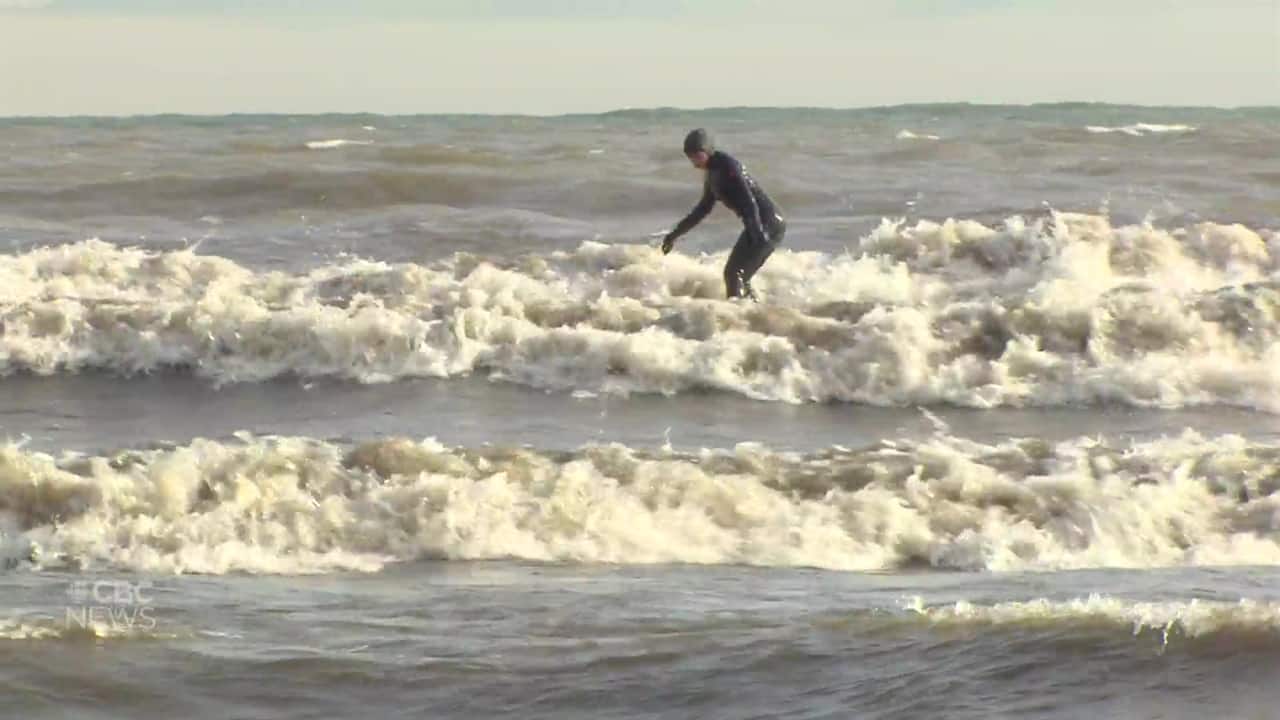 A small band of intrepid surfers enjoys a welcome challenge in the icy waters of Lake Ontario, near Burlington, and finds camaraderie and peace during the coronavirus pandemic. ‘There’s so much serenity in surfing,’ says Sam Macsai. 0:56

“It’s been hard not being able to make an income and being at home all the time and being so isolated socially.”

Surfing helps both women with their mental health.

“There’s so much serenity in surfing and being able to escape all the outside problems and this whole pandemic and everything that’s going on in your life.” Macsai said.

It also provides a chance to socialize while social distancing on the shore and in the water.

“It’s just so beautiful to see such an amazing community of people to come together. We’re all here for the same reasons, everybody so welcoming and so friendly,” she said.

“It’s nice to be able to bounce off each other and just use each other as emotional outlets,” Macsai said.

As the temperatures plummeted both women knew they were going to have to invest in gear to keep surfing in subzero conditions. They squeeze into thick neoprene suits, wool-lined booties and neoprene gloves in the parking lot next to the beach.

Once in the water there’s an initial shock to their exposed faces.

But then it gets better, Macsai said.

“It’s the most adaptive part of your body … after like 20 minutes, you’re good to go for a while.”

As the women make their way to the water they run into a man with a thick crown of ice formed around the hood of his suit. Jason Marshall has just emerged from the water.

“The waves were big and clean,” he tells them.

This is the best time of year for surfing, Marshall said.

“When the winds are at their peak … that’s when the waves are the best. So, that’s when we go,” he said. “It’s surprisingly not as cold as it looks,” he said.

The surfers climb over an icy, crusted snowbank into the water, every now and then their legs sink through. Once in the water they wade in before making shallow dives into the waves and paddling toward the breakline. They last about 40 minutes.

On the beach, icicles and frozen silt cling to their hair and suits. Their faces are red and stiff but they are smiling.

“No better way to wake up in the morning than a cold wave in your face.” Heino said.

They head back to their cars and back to isolation to start scanning the weather forecasts for their next opportunity to do it all over again.

“I feel great. I mean, it’s always a good day when you can surf and be with your friends,” she said.