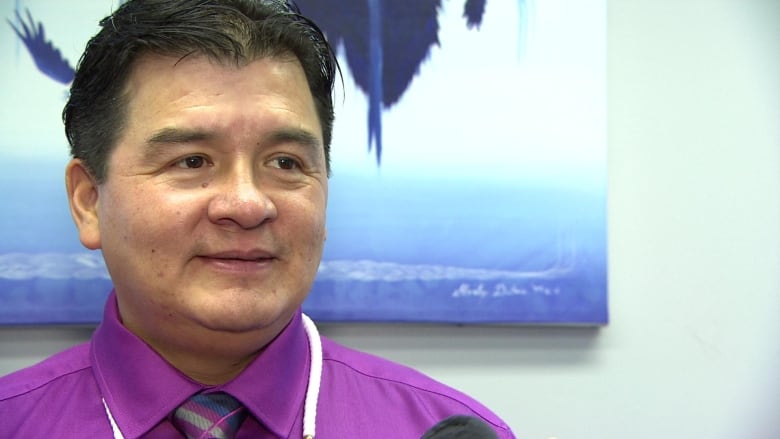 A Roman Catholic Church document claiming the church provided $25 million of “in-kind services” to residential school survivors is sitting inside a Regina courthouse, but officials are refusing to release it.

Survivors, First Nations leaders and legal scholars across Canada interviewed by CBC News all agree that it’s a public document and must be released immediately.

“We need to see it,” Sturgeon Lake First Nation elder and residential school survivor A.J. Felix said. “The church was able to stickhandle their way through all this legal wrangling. They got away with it. But no more.”

Chief Bobby Cameron of the Federation of Sovereign Indigenous Nations, which represents Saskatchewan’s First Nations, said the lack of transparency from the Catholic Church and now the courts is wrong.

“That information is the property of First Nations survivors and their descendants,” Cameron said. “It’s beyond me why the Court of Queen’s Bench is failing to release this. What are they hiding? We are sick and tired of this cat-and-mouse game.”

The document is said to outline “in-kind services” that the church agreed to provide as part of a deal reached with the federal government to compensate survivors of residential schools in Canada.

Court officials confirmed the existence of the Catholic Church ledger requested by CBC News but declined to provide it.

Saskatchewan Court of Queen’s Bench Chief Justice Martel Popescul declined an interview request. In a letter emailed to CBC News by a court official on Friday afternoon, Popescul said the court “has a supervisory role over court records” and that proper procedure is being followed.

“The court will not change its procedures, hurry its processes or ignore fundamental responsibilities to meet your deadline,” the letter read.

Mayo Moran, a former dean at the University of Toronto’s law faculty, said full, immediate disclosure is even more important in light of the recent discoveries of more than 1,000 unmarked graves near residential school sites in Kamloops, B.C., Cowessess First Nation in southern Saskatchewan and elsewhere in Canada.

“If we look at the national conversation that we’re having, I think it’s really important for all participants to be as open as possible,” said Moran, who served as independent compensation committee chair for the landmark Indian Residential Schools Settlement Agreement of 2005.

“We need to do everything possible to give survivors the information they deserve…. Do it. Do it quickly. Don’t make it more painful for individuals that have already suffered so much.”

Prior to the 2005 agreement, the federal government and various churches faced billions of dollars in lawsuits from survivors and their families.

The Catholic Church, the only party refusing to sign the main agreement, reached a side deal with Ottawa. Dozens of lawyers hired by the 48 Catholic entities eventually signed.

Those entities included various dioceses and archdioceses in Canada and orders of priests and nuns that operated some of the schools. The three other churches that operated schools — United, Anglican and Presbyterian — signed the original deal and paid full compensation years ago without incident.

‘It would be helpful to see what’s on that list’

The Catholic Church made three promises to survivors, totalling $79 million.

It first agreed to a $29-million cash payment. Most of that appears to have been paid, with the church securing a court order in 2015 that it had to pay only $1.2 million of what was remaining.

Secondly, the church agreed to give “best efforts” at fundraising $25 million. Less than $4 million of that was paid to survivors. Citing the “best efforts” clause, a Saskatchewan judge absolved the church of further fundraising in that same 2015 case. Following a recent CBC News investigation, church boycott calls and revelations that more than $300 million was devoted during this period to cathedral and church construction, bishops across Canada announced a renewed fundraising campaign to be launched this fall.

Thirdly, the Catholic Church was allowed to claim the final $25 million as “in-kind services.” The agreement specified that the services should directly benefit survivors and their descendants. Wider community projects could also qualify, but they were not the focus.

Felix, of Sturgeon Lake First Nation, and other survivors say they have no idea what those in-kind services were and that they have a right to know.

“It would be helpful to see what’s on that list. I haven’t heard any of my clients obtaining any of those services,” said Thunderchild First Nation member Eleanore Sunchild, a lawyer who’s represented thousands of survivors.

CBC News asked for a detailed accounting of in-kind services from the Canadian Conference of Catholic Bishops and other church bodies. They say they don’t have it.

The Catholic corporation formed to negotiate the 2005 settlement has been dissolved. One of the lawyers who represented that group repeatedly stated to CBC News in recent weeks that no one can speak collectively for the 48 “Catholic entities” that formed the now-defunct corporation.

“I wish to remind you … that neither the Archdiocese of Regina nor me have authority to speak on behalf of other Catholic entities,” Regina lawyer James Ehmann said in an email to CBC News last month.

CBC News requested a copy of the ledger. Court staff confirmed the existence of the document and said it does not appear to be sealed or under a publication ban. It was submitted as part of the 2015 court case and has been sitting in a Regina storage facility used by the Court of Queen’s Bench.

But the official declined to provide it, instead giving it to Justice Neil Gabrielson, who oversaw the 2015 case.  Gabrielson is also declining to provide it immediately to CBC News. Instead, he said an application must be submitted and all parties involved in the 2015 case are to be notified.

Legal experts say the process could take months, an unacceptable delay for survivors and the public.

“Behind the curtain, the nub of the issue is the factual and financial evidence in the case file to demonstrate the Catholic entities’ … ‘in kind’ services they provided between 2007-2015,” said Mary Ellen Turpel-Lafond, a former Saskatchewan provincial court judge and director of the University of British Columbia’s Indian Residential School History and Dialogue Centre in Vancouver.

“These records should be fully accessible now.”

Thomas McMahon, who served as general counsel for the Truth and Reconciliation Commission, said the Catholic commitment was a “bargain” compared with the liability the church faced.

In a statement, the Canadian Conference of Catholic Bishops (CCCB) said it didn’t have the ledger because it was not a formal member of the national Catholic corporation.

“Having said that, it must be affirmed that more work needs to be done and the bishops are fully committed to an ongoing journey of healing, dialogue, atonement and reconciliation with Indigenous Peoples,” the CCCB stated in an email.

Time for patience is over, elder says

Chief Justice Popescul said access to a court exhibit “is controlled by the presiding judge” and that it would be inappropriate to interfere now that Gabrielson has made his decision.

“Judicial independence is a fundamental tenet of our legal system,” Popescul wrote.

“You will have your answer in due course, and if you disagree, you may consider appealing to the Court of Appeal — the proper and usual process.”

Elder A.J. Felix, who was forced to attend St. Michael’s and Lebret residential schools in Saskatchewan, said these institutional attitudes are a big part of the problem. He said the law has been used to deny justice and dignity to First Nations people since first contact with Europeans.

“We will kill their buffalo. We will withhold medicine for the illness we bring. We will confine them to reserves,” Felix said.

“And yes, we will build residential schools. We will brainwash them, teach them that their people are devils and they’ll go to hell if they continue on that Red Road. We will even bury their kids without telling them. That will complete the genocide.

“This was all ‘legal,’ backed by the RCMP and the government.”

With the lifting of COVID-19 restrictions, Felix is once again leaving his home on the Sturgeon Lake First Nation in central Saskatchewan, speaking with fellow survivors, youth groups and others across the Prairies.

Felix, a pipe carrier for the numbered treaty territories, said education is central to overcoming the devastating legacy of residential schools. That can’t happen if the courts, the Catholic Church and others continue to hide the truth, he said, adding that the time for patience is over.