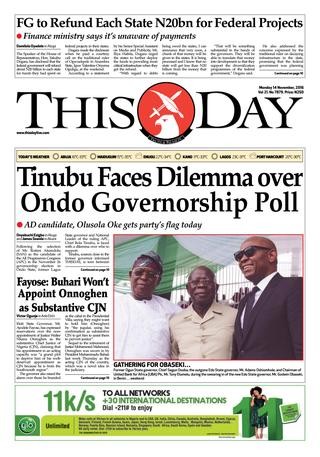 ABUJA — House of Representatives Committee on Public Account, yesterday, gave the Permanent Secretary in the Ministry of Transportation, Mr. Sabiu Zakari, 48 hours to pay N3.935 million into government coffers or face the wrath of Economic and Financial Crimes Commission, EFCC.

This development was sequel to deliberation on a query raised by the office of the Auditor-General of the Federation asking for explanation on identified extra budgetary spending by three agencies under the ministry to the tune of N1.195 billion in 2015.

The committee, led by Kingsley Chinda (PDP, Obio Akpor Fed Constituency, Rivers), also directed the Permanent Secretary to show evidence of such payment on the next adjourned date, to enable final decision to be taken on the substantive query.

The current ruling was a deviation from a previous one, which directed that the Permanent Secretary be remanded  in security custody,  pending the payment of of the said sum.

But after a passionate plea by the Permanent Secretary, the committee soft-pedaled.

Committee members had grilled the Permanent Secretary for close to an hour, demanding to know why their directive of June 2016 was not implemented.

Zaphaniah Jisalo (PDP, FCT), had moved that the Ministry of Transport (Aviation) be made to account for N1.195 billion said to have been given to staff to make supplies in a non-contractual arrangement.

The Permanent Secretary, Sabiu Zakari, in his defence, explained that the funds were disbursed to the staff to make arrangements for Nigeria at 50 anniversary celebration in October 2015.

Zakari explained further that “when certain projects come up, there maybe need to approve money for the agencies, even though the money must have been provided for in the budget.

“The reason is to beat time lag and actualise the projects based on timelines, which was why the said amount was approved for the agencies to carry out their activities in the Nigeria at 50 project.”

The committee, using its records identified another officer, P.E Iroroh, who was at the meeting to brief her superior on the decision reached.

She said the directive was that “the officers to whom money was given should be asked to refund, and if they refuse to do so, should be asked to appear before the committee to show cause why they should not be recommended for prosecution.’’

Chairman of the committee, therefore, ruled that the PermSec  should regularise the implementation procedures of appropriated sums under his Ministry before the next adjourned date and show cause with evidence of payment at the next sitting today.