Rep. John Delaney is running for president in 2020 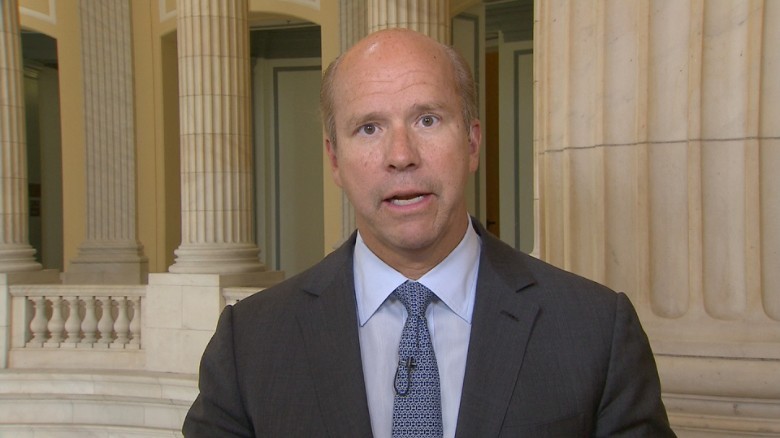 Rep. John Delaney (D-Md.), a moderate who has represented Western Maryland for three terms on Capitol Hill, on Friday became the first Democrat to formally enter the 2020 presidential race — just six months after the election of President Trump.

“Obviously, I believe he is a terrible president and taking the country backwards and really undermining some of our most important values,” Delaney said a phone interview Friday afternoon, shortly after he announced his candidacy in an op-ed published by The Washington Post.

“I think Trump, to some extent, is a punctuation of everything that has broken down with our politics,” he said.

[Delaney: Why I’m running for president]

Delaney, 54, a self-made financier, cast himself in the op-ed as “a progressive businessman” who respects “the power of our free-market economy while also insisting that there is a role for government to set goals and rules of the road and take care of those who are left behind.”

The son of a New Jersey electrical worker, Delaney is one of the wealthiest members of Congress, with an estimated net worth of more than $90 million. He has demonstrated a willingness to use his fortune as a candidate, having spent $3.3 million in his first two House campaigns.

The announcement of his candidacy, more than 1,000 days before Election Day 2020, will subject him to a whole new level of scrutiny.

“I know what I’m getting into. Obviously, this is a very significant undertaking but I really do believe I have something to say,” he said, adding: “So just like [the] guy in Tiananmen Square when he stood in front of the tank didn’t really quite know how he was going to beat the tank. . . . I understand running for president is a huge challenge but, you know, I’m ready for it.”

His decision was treated positively by senior Democrats.

“John Delaney is an excellent member of Congress, and he’s brought new ideas to the Maryland delegation,” Minority Whip Steny H. Hoyer (D-Md.) said in a statement. “I know he’ll bring an important perspective to the national debate as we head into 2020.”

Other political professionals said that while Delaney has given himself an enormous time advantage by being first out of the gate, that edge will not last long.

“While he is first in the presidential pool, soon that pool be crowded with senators, governors, CEOs and even a celebrity or two,” said C.R. Wooters, former chief of staff to Sen. Chris Van Hollen. “He’s going to have to work hard to raise his national profile.”

The announcement, rumored in Maryland political circles for weeks, follows more than a year of speculation about Delaney’s future.

Delaney had been widely considered a possible challenger to popular Republican Gov. Larry Hogan in 2018. He won a gubernatorial straw poll of activists at a Democratic summit in Western Maryland’s Rocky Gap Casino Resort in April.

In May, aides hosed down rumors of a presidential run, sparked by MSNBC “Hardball” host Chris Matthews — husband of Maryland Democratic Party Chair Kathleen Matthews — who said that Delaney had set up an office in Iowa.

“I am not running for president,” he told Montgomery Community Media that same month.

But recently, Delaney has been missing from major Maryland political events, such as the Tawes Crab and Clam Bake on the Eastern Shore this month.

Through less than three terms in the House, Delaney has labored to pass his signature initiative, which would allow corporations to repatriate a portion of their overseas earnings tax-free in exchange for buying bonds to fund infrastructure improvements.

Delaney was a first-time candidate in 2012, when he stunned the Democratic establishment by beating state Senate Majority Leader Robert J. Garagiola (D-Montgomery) in the primary. Helped by new district boundaries that added thousands more Democratic voters from the Washington suburbs, he then ousted longtime incumbent Rep. Roscoe G. Bartlett (R).

His decision to leave Congress will send ripples through Maryland politics, setting the stage for a vigorous 2018 Democratic primary campaign in the 6th congressional district. Potomac wine executive David Trone, who spent a record $13 million of his own money in a losing bid for the 8th congressional seat in 2016, is expected to announce his candidacy for Delaney’s seat.

“Today is a day to talk about John, and I will be announcing my plans in the coming days,” Trone said in a statement Friday.

Both Frick and Miller said Friday that Trone’s likely entry into the race doesn’t change their plans.

“I’ve spent a lot of time around Maryland Democrats and I don’t think I’ve ever heard them say that we need more wealthy busi­ness­people running without experience whose initials are DJT,” Frick said, a reference to the fact that David J. Trone shares the same initials as Trump.

Miller said Trone’s personal resources posed a challenge, but added: “I believe public service is something you earn. You don’t buy it.”

Delaney’s decision also affects the race for county executive in Montgomery. Trone had said that if Delaney chose to run for reelection, he was likely to enter that contest, where three County Council incumbents — Roger Berliner (D-Potomac-Bethesda) Marc Elrich (D-At Large) and George L. Leventhal (D-At Large) — are candidates.

With Trone and his millions of dollars out of the picture, the race for county executive may become more attractive to others, including Del. Benjamin F. Kramer (D-Montgomery), former council member Mike Knapp and state. Sen. Cheryl C. Kagan (D-Montgomery). Trone’s absence also creates a lane for a nontraditional candidate, possibly from the business community.