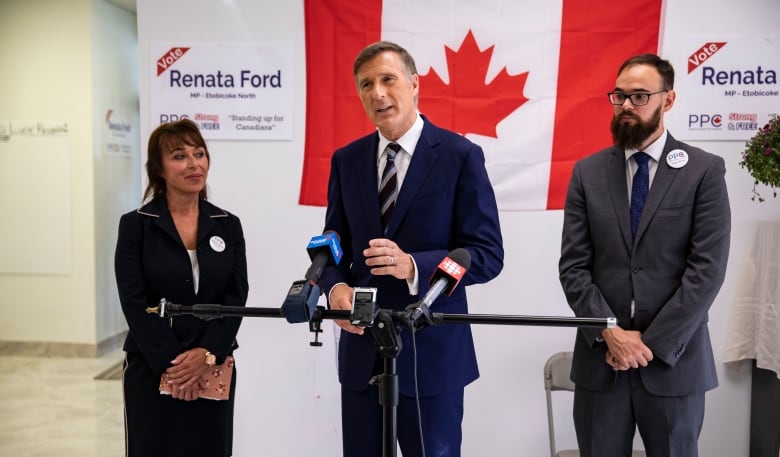 A federal election campaign launch in a small, stuffy office in the reliably Liberal riding of Etobicoke North would normally gather little media interest — except, of course, when a Ford is involved.

That’s why it was here, at the campaign headquarters of Renata Ford, that Maxime Bernier decided to formally kick off his election bid earlier this week, on the first official day of the race. The leader of the People’s Party of Canada is hoping to capitalize on that name and legacy, hoping the widow of former Toronto mayor Rob Ford just might have a chance of securing a victory for the fledgling party.

“I don’t know what can happen. But because of her name, she has a good chance here,” Bernier said about his star candidate. “That’s why I’m with her.”

For Renata Ford, who has no political experience, it was “destiny,” she says, that she run and be part of Bernier’s party. She repeats much of what she said when she first announced her candidacy in June: That Bernier’s policies and his passion for his country is like the passion her own husband had for city hall and the people it serves.

While Rob Ford’s issues with substance abuse, most notoriously crack cocaine, grabbed headlines worldwide, Renata Ford has also had her own struggles. Back in June, she admitted she had gone through a “period of trials and tribulations” but was now “healthier” and “more ready than ever” to run to be a member of Parliament.

After pleading guilty to impaired driving in 2018 for a 2016 incident, Renata Ford was sentenced to three years of probation and 100 hours of community service. She was also issued a two-year driving ban and a $1,100 fine.

(When the topic is raised during the news conference that followed Wednesday’s campaign launch, Ford said she can now drive, while Bernier simply said, “That’s in the past.”)

None of that, however, likely makes much difference to many supporters of Ford Nation, who stuck by Rob Ford during his tumultuous time and feel the same affection for his wife.

The question is, however, will the political support for her husband and other Ford family members translate into votes for her on Oct. 21?

‘We love Renata and Rob’

“We love Renata and Rob, and we’re here to support so the legacy continues from Rob to her,” said Penny Morrison, a resident of Etobicoke North and one of only a handful of supporters who came out for the campaign launch.

The Toronto riding represents a new political landscape, where constituencies and voters are not fundamentalist in their attachment to any one political party, says Myer Siemiatycki, professor emeritus of political science at Ryerson University.

Etobicoke North has been one of the safest federal seats for the Liberals in recent years, with Science and Sport Minister Kirsty Duncan, who is running again, winning it by a margin of 39 percentage points in 2015.

Since 1962, the Liberals have only lost Etobicoke North once — in 1984. After the party won it back in 1988, it has only had three different MPs: Roy MacLaren, Roy Cullen and Duncan.

Yet what makes the riding one to watch in this election is that it’s also ground zero of Ford Nation.

It’s where Renata’s brother-in-law, Ontario Premier Doug Ford, has his seat, having flipped it last year from the provincial Liberals, who had previously held it since 2003. Doug Ford won by a margin of 27 points over the New Democrat candidate.

Meanwhile, Michael Ford, the nephew of Rob and Doug, is the city councillor for the area.

“Fords are the best. The Ford brand — you can’t beat a Ford, no matter who they are,” said Morrison. “This is the heart of Ford Nation. There’s so many people from Ford Nation who love the Ford name because it’s a guaranteed great thing to have a Ford. Doug is MPP. Michael is my councillor. If Renata is my MP, then it’s complete.”

Genevieve James, who was also at the campaign launch, says she, too, loved Rob Ford and believes Renata Ford will carry on his political tradition.

“The name is a legacy. But she’s holding her own,” she said.

But since the death of Toronto’s former mayor, Ford Nation is not the unified force it once was.

Renata Ford is entangled in a multimillion-dollar lawsuit against Doug Ford, fellow brother-in-law Randy Ford and their family businesses, claiming she and her children were bilked out of millions.

‘I hear about Rob and the support he had’

Renata Ford won’t speak about the lawsuit. And when asked whether the premier has offered any support, she’ll only say that “Doug has his job to do and I’m more focused on the federal [election] and Maxime Bernier.”

“When I go to the doors, I hear about Rob and the support he had,” she said. “And they loved Rob and my family, and they supported us.”

At the No Frills grocery store across the street from Ford’s campaign office, Moe Rutherford, who lives in the riding and supported the Liberals in the last federal election, says the fact that a Ford is running in this election could certainly make a difference in how he votes.

“The Ford name is synonymous with politics right across the board,” he said. “Rob Ford tried to do a lot of things that were good for the city, so that’s a win factor for her.

“But what’s her platform? We’re still wondering what it is,” he said. “I can go either way.”

Craig Morton, who has lived in the riding for 54 years, said while he has been a supporter of the Fords, that doesn’t mean Renata Ford will automatically get his support.

“I’m probably not going to back her; she doesn’t come across well in the press,” he said. “I love the Fords themselves.”

Jasbir Hundal, who is campaigning for his sister, Conservative candidate Sarabjit Kaur, says he doesn’t believe the Ford name or legacy is really an issue.

“I don’t think there’ s much impact,” said Hundal, speaking at Conservative Leader Andrew Scheer’s campaign rally in Woodbridge, Ont., on Wednesday. “We are door-knocking, but people are not raising that.”

While there’s often an advantage to challenging an incumbent when the candidate has so-called “star power” attached to their name, Siemiatycki said, it is certainly no guarantee of success or a “magic wand.”

“Star power, if it works, kind of depends on a known track record and a set of accomplishments attached to the candidate,” he said.

And when it comes to Renata Ford, despite the name, Siemiatycki doesn’t expect a strong showing.

“She doesn’t have a record or stature in her own right,” he said. “Yes the Ford name and brand has a certain cachet, but it’s not a kind of blank cheque.”