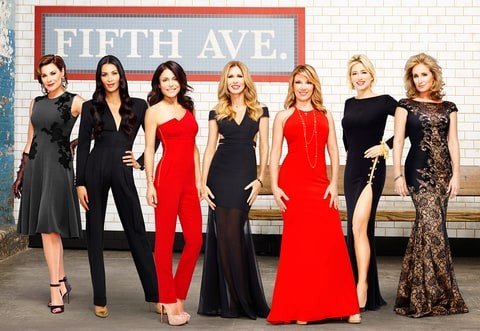 It’s time to go back to Mexico one last time for the women of The Real Housewives of New York City.

On part three of the RHONY reunion, airing Wednesday, Aug. 30 on Bravo, Andy Cohen takes Bethenny Frankel, Ramona Singer, Dorinda Medley, Tinsley Mortimer, Luann de Lesseps, Carole Radziwill and Sonja Morgan on a trip down tequila-filled memory lane to discuss their now infamous Mexican getaway and it wouldn’t be complete without discussion of Luann’s epic falls. Yes, not one, but the two falls she took on one particular wild night.

“Round of applause for Luann,” Andy said.

“I survived…without a scratch,” Luann said. “Wait, wait, did you see me in the bush? I didn’t even want to get up, I was having so much fun.”

Bethenny said Luann went to her the next day and said she “took a tumble in the garden.” “Uh, no you didn’t,” Bethenny said. “Man down! Like, we’re going to the morgue.”

The second fall was a little nastier, but she still remained unscathed.

“I have never in 10 years of you being on TV seen you that drunk,” Andy told her.

“I never really get out of control…And I don’t drink margaritas. It was a long day of travel, I drank, I didn’t eat and boy did it hit me,” Luann said.

And that was just one of the drunken nights the women of the Big Apple had during their trip South of the Border. However, despite the copious amounts of tequila—and we mean copious—not one Housewife got sick from drinking.

“We all got up the next morning,” Dorinda said.