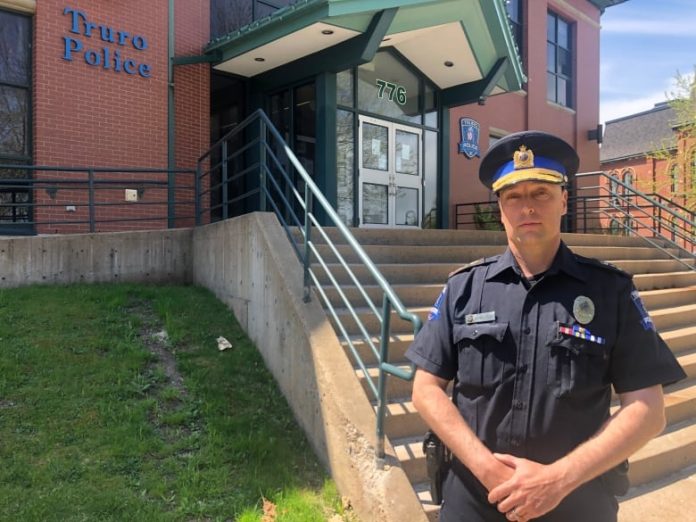 Truro’s police chief felt the RCMP was resistant to his force’s plans to release a 2011 bulletin warning that the gunman who went on a shooting rampage in 2020 had weapons and threatened to “kill a cop,” according to documents released by the public inquiry examining the tragedy.

Two weeks after Gabriel Wortman killed 22 people, including a pregnant woman and an RCMP officer, CBC News requested all of the Truro Police Service’s records related to the mass shooting through freedom-of-information legislation.

Chief Dave MacNeil told investigators with the Mass Casualty Commission he had informed the RCMP in advance that his legal advisors had determined they were bound by legislation to release their files. In response, he said two of the most senior Mounties in the province, Chief Supt. Chris Leather and Chief Supt. Janis Gray, arranged a call.

“To me [the message] was, this bulletin needs to not surface.. We need to explain this bulletin away,” MacNeil said in his interview with the public inquiry.

“I felt as if, I’m not going to say pressured, but I felt… if the bulletin could go away they would be very happy. And I wasn’t able to do that because that’s not the way I do business.”

MacNeil, who the commission interviewed in August 2021, said he felt it was “not ethically and morally correct” to withhold the public records requested by CBC and Global. He said he declined the RCMP’s request to review their files in that May 2020 call.

The police chief declined to speak with CBC News Thursday, citing his participation in the inquiry. He expects to be called as a witness in June.

The RCMP told CBC News it would be inappropriate to comment on specific documents or testimony while the inquiry is underway.

In an emailed statement, Cpl. Chris Marshall didn’t specifically address the May call but said Leather and Gray got in touch with Truro earlier, on April 24, because they were looking “for more details, including the context of the information in the bulletin and whether additional information was available.”

The records released to CBC in May 2020 included transcripts of dispatch communications on April 18 and 19, bulletins circulated by the RCMP about the active shooter on April 19 and emails that refer to an anonymous tip that Cpl. Greg Densmore received in 2011 about Gabriel Wortman.

Densmore had sent an “officer safety bulletin” to other police agencies at the time warning them he’d heard from an unnamed source that Wortman had several guns and a source said he was experiencing some mental issues.

Prior to CBC publishing a story about the 2011 tip, the RCMP had not mentioned it publicly — though records show municipal police forces flagged the bulletin in the hours after the gunman’s name became public on April 19 and the RCMP began looking into it within days.

MacNeil said the release of the tip became a “contentious” issue and that the RCMP wanted him and other municipal chiefs to be part of a joint press conference about it.

“It became very clear to the three chiefs that this was about ‘how do I move the narrative and put it on someone else.’ And we weren’t playing ball,” he told the commission.

MacNeil told the inquiry, as he told CBC News at the time, the tip related to someone who didn’t live in his force’s jurisdiction so his agency’s involvement ended after it was submitted and it would’ve been up to other agencies to investigate.

Though the RCMP did not ask the municipal force to respond on April 19, except for a late request to “lock down” the town  and to investigate a possible sighting of the shooter at grocery store on April 19, Truro’s police chief told the inquiry it had a profound impact on his team and community.

“The incident caused a lot of angst and grief among our officers,” he said. “A lot of them thought the thing was a complete mess…. [They] weren’t given information, but we didn’t have information to give them.”

In his interview with the commission, he said his front-line officers still have a good relationship with their Mountie counterparts in Colchester County and they share information as needed. But he said at the senior level, the strained dealings with RCMP hit “rock bottom” in the wake of the tragedy.

He said at the provincial level, the RCMP dealt with his command team with “intimidation and spin doctoring and lack of transparency.”

The commission had initially planned to release this week its preliminary report on the involvement of municipal police agencies on April 18 and 19, 2020. The release of that foundational document has not yet been rescheduled.

When asked in the spring of 2020 about how officers responded to the 2011 tip, the RCMP initially said they had purged the records from their system and did not have access to the bulletin on April 18 and 19. In a June 4, 2020 press conference, they said they were looking into contact an officer had with Wortman.

Documents released this spring by the public inquiry showed that after the bulletin circulated in 2011, a police officer in Halifax who’d looked into a previous complaint that the gunman threatened his parents followed up with Densmore.

Cordell Poirier, who has since retired from the Halifax police force, told the commission that he had contacted RCMP Const. Greg Wiley in Bible Hill following the 2010 threats complaint. Wiley described himself as a friend of the gunman’s and told Poirier he’d try to speak with Wortman about the complaint directly.

Poirier told the commission said he found it “strange” to learn that more than a month later, Wiley had not done so. Poirier closed the file in late August without ever hearing from Wiley.

Wiley told RCMP investigators in a June 2021 interview that he didn’t remember speaking to Poirier, and described Wortman as a “very very polite guy.”

After the 2011 bulletin was released, Poirier — describing Wortman in his notes as a “viable threat” — contacted the Bible Hill RCMP detachment again and told on-duty supervisor Const. John MacMinn about the previous year’s incident. MacMinn, who hadn’t seen the bulletin, said he’d follow up with Wiley and contact Poirier with an update.

“I never got that update,” Poirier told the commission. “I don’t know if he contacted somebody in our department and passed the information along, but I never got any information.”

CBC filed the same request for records sent to Truro police to the Amherst Police Department and Halifax Regional Police. Amherst released its records but Halifax did not, citing the ongoing investigation.

Halifax police also denied a subsequent request for information about how it responded to the 2011 tip. CBC appealed both matters and they have yet to be resolved.

CBC has also filed numerous access-to-information requests to the RCMP.

Some requests were denied because the material requested related to the “the detection, prevention or suppression of crime,” one of a number of reasons public bodies are allowed to make exceptions. None of the records released included reference to the 2011 tip.