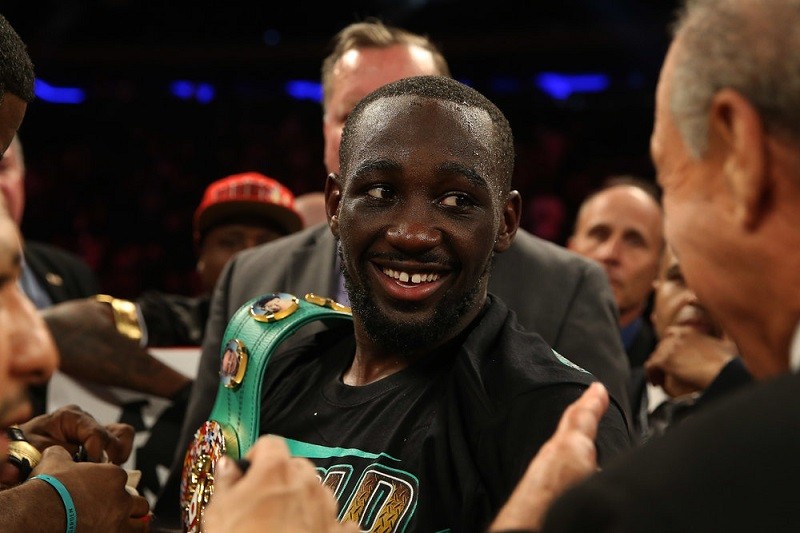 Julius Indongo will put his belts on the line in an attempt to unify the junior welterweight division in a bout against Terence Crawford in August.

JUNIOR WELTERWEIGHT DIVISION (UP TO 140 POUNDS)

Crawford, the 2014 fighter of the year, scored the biggest win of his career in July 2016 when he scored two knockdowns and shut down formidable titleholder Viktor Postol in a lopsided unanimous decision to unify titles and stamp himself as the indisputable best 140-pounder in the world. In his Dec. 10 return, Crawford shellacked John Molina, who had zero chance to win and took a savage beating until the fight was finally stopped in the eighth round. Crawford’s next defense came May 20 and he put on a masterful performance as he stopped Felix Diaz in the 10th round of an entertaining but one-sided fight. Crawford’s next fight will be ESPN in his home region of Lincoln, Nebraska against Namibia’s Julius Indongo (22-0) — who was ringside for Crawford-Diaz on a scouting mission — in an attempt to unify all four major titles
Next: Aug. 19 vs. Indongo

2. Viktor Postol (28-1)
In October, Ukraine’s Postol met big puncher Lucas Matthysse for a vacant world title in an excellent match and turned in a superb performance as he scored a 10th-round knockout victory. As good as that performance was, Postol’s first defense was a big disappointment on July 23, when Terence Crawford took him apart. Crawford dropped him twice in the fifth round and rolled to a lopsided division. Postol is eyeing a return, but nothing specific is in the works.
Next: TBA

3. Julius Indongo (22-0)
In his first fight outside of his home country of Namibia, the heretofore unknown Indongo impressed mightily on Dec. 3 when he traveled to Moscow and scored a sensational one-punch knockout of Eduard Troyanovsky in just 42 seconds to win a world title. It was a devastating overhand left that was reminiscent of Manny Pacquiao’s brutal second-round knockout of Ricky Hatton in 2009 in the same division. Indongo then went right into a title unification fight, traveling to Ricky Burns’ hometown of Glasgow, Scotland, and easily outpointing him on April 15 to collect another title in a surprisingly easy win. Next up he will face Terence Crawford (31-0) for all the marbles at 140 pounds as they seek to unify all four major belts on ESPN.
Next: Aug. 19 vs. Crawford

4. Antonio Orozco (26-0)
San Diego’s Orozco, who fights in a relentless, fan-friendly style, headlined the April 1 “Golden Boy Boxing on ESPN” card and looked terrific in a fourth-round knockout of previously undefeated KeAndre Gibson. If Orozco and his team have their way he will next fight on the Sept. 16 Canelo Alvarez-Gennady Golovkin HBO PPV undercard.
Next: TBA

5. Ricky Burns (41-6-1)
The former junior lightweight and lightweight titlist knocked out Italy’s Michele Di Rocco in the eighth round in May 2016 to win a vacant 140-pound belt, making him the first fighter from Scotland to win world titles in three weight classes. He made his first defense at home in Scotland against mandatory challenger Kiryl Relikh, of Belarus, in October, but in defense No. 2, also in Scotland, he lost a lopsided decision in a unification fight with Namibia’s Julius Indongo.
Next: TBA

6. Eduard Troyanovsky (26-1)
Russia’s Troyanovsky made two successful title defenses but then ran into the unknown Julius Indongo, a 2008 Olympian from Namibia, and shockingly got knocked out in 42 seconds on Dec. 3. He made his return on July 1 against former title challenger Michele Di Rocco, of Italy, and looked good as he scored four knockdowns — all with right hands — en route to a fourth-round knockout victory.
Next: TBA

7. Felix Diaz (19-2)
Diaz, who won an Olympic gold medal for the Dominican Republic in 2008, is a very good fighter and deserved the long sought-after shot at unified world champion Terence Crawford he got on May 20. However, Crawford is superb and dominated Diaz in a one-sided fight that ended after the 10th round when Diaz’s trainer, Joel Diaz, did the right thing and stopped the fight.
Next: TBA

8. Adrian Granados (18-5-2)
Chicago’s Granados, who scored a massive upset of Amir Imam in 2015 to knock him out of a mandatory title shot, has a deceiving record. All five of his losses are either by majority or split decision, including an action-packed Feb. 18 welterweight fight against friend and former titlist Adrien Broner, who edged him by split decision in a fight that could have gone either way. He was in the mix to possibly challenge world champion Terence Crawford (30-0) in May but won’t be ready in time.
Next: TBA

9. Sergey Lipinets (12-0)
Lipinets, a native of Kazakhstan fighting out of Los Angeles, earned a mandatory shot at unified titleholder Julius Indongo when he knocked out Lenny Zappavigna in the ninth round of their elimination fight in December. Lipinets maintained his status in a stay-busy fight on March 4 by drilling Clarence Booth in the seventh round.
Next: TBA

10. Regis Prograis (20-0)
Prograis, with good skills and power, has been making his way up the ladder for the past few years but made a major statement on June 9 when he dropped then-unbeaten Joel Diaz Jr. four times in a second-round knockout victory in the main event of Showtime’s “ShoBox: The New Generation.” Prograis’ biggest issue now is going to be convincing top opponents to fight him.
Next: TBA