Raids In London After Attack That Killed 7, Injured 48 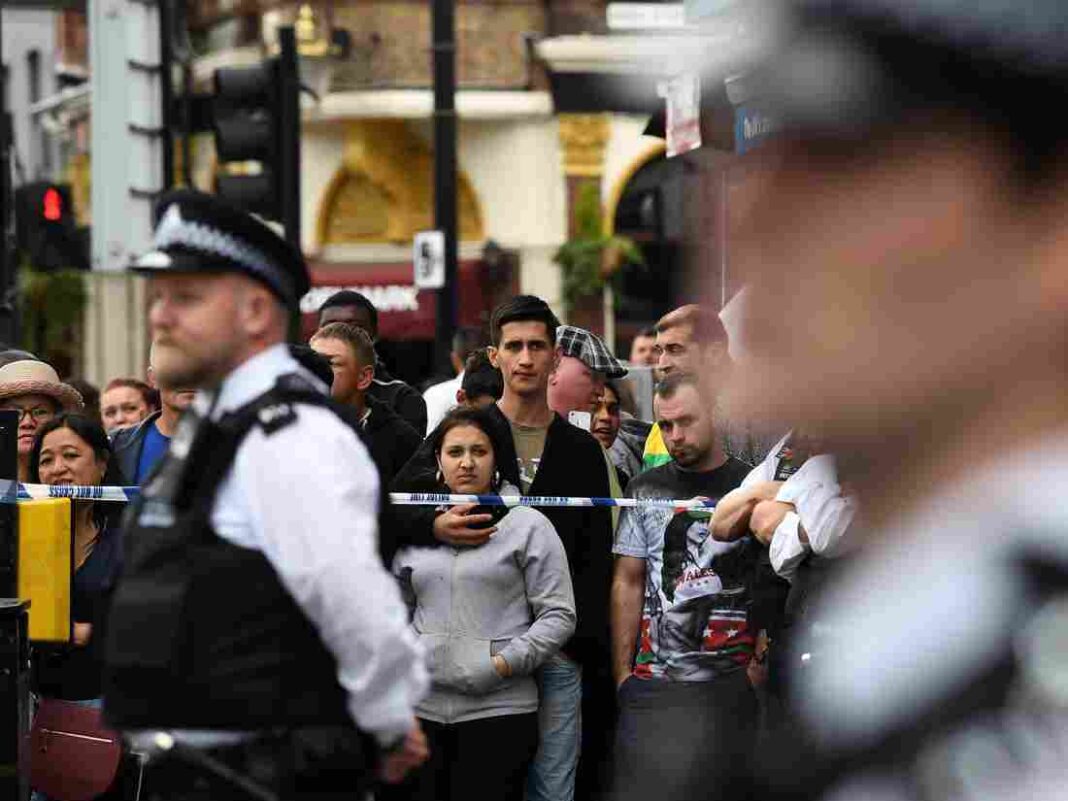 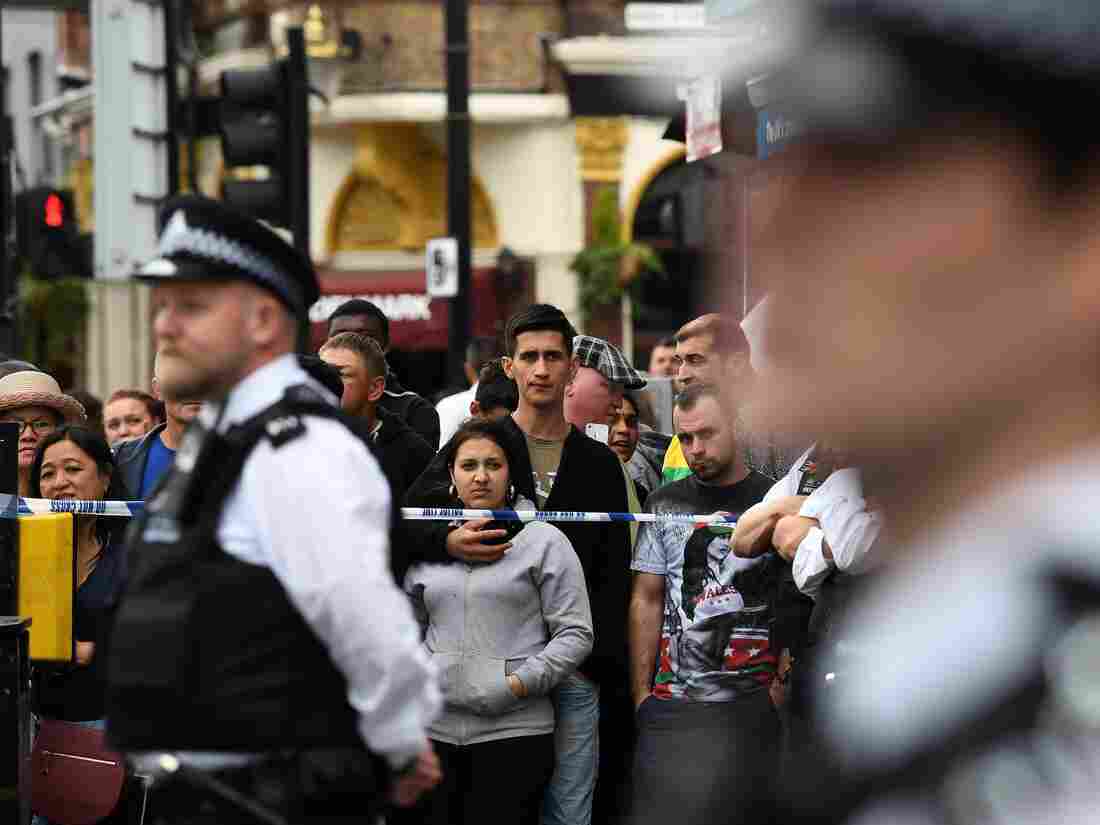 Londoners stand behind a cordon in the East Ham district on Sunday, following a police raid investigating Saturday’s terror attacks in Central London.

Seven people were killed in London on Saturday night in what police declared a terror attack. Three men used a van and knives in the incident, which also injured 48 people.

The attack began at about 10 p.m., local time, when a van crossing London Bridge veered into pedestrians, crashing outside the Barrowboy & Banker Pub. Witnesses told the BBC that van hit “five or six people,” then the attackers exited the vehicle and pursued others in a “rampage” in which hundreds ran for their lives. One witness said he saw a woman stabbed “10 or 15 times” by the men, who he said shouted “This is for Allah.”

The men then ran down a set of stairs and began stabbing people at a number of different pubs and restaurants in Borough Market, a historic fruit and vegetable market. The men wore what police said were fake explosive vests.

Eight minutes after police were called to the market, the three suspects were shot dead by police. Officers fired 50 rounds at the men, wounding a civilian non-critically in the process.

Police declared the incident a terrorist attack shortly after midnight.

This is the third terrorist attack on Britain in the last three months, following the attack on Westminster Bridge in March that killed five people, and the bombing of an Ariana Grande concert in Manchester less than two weeks ago in which 22 were killed and dozens were injured.

The Joint Terrorism Analysis Centre said that because no more perpetrators are thought to be at large, it recommends keeping the country’s threat level at “severe” rather than elevating it to “critical.”

The UK is holding a general election on Thursday; Prime Minister Theresa May called for the snap election in April. 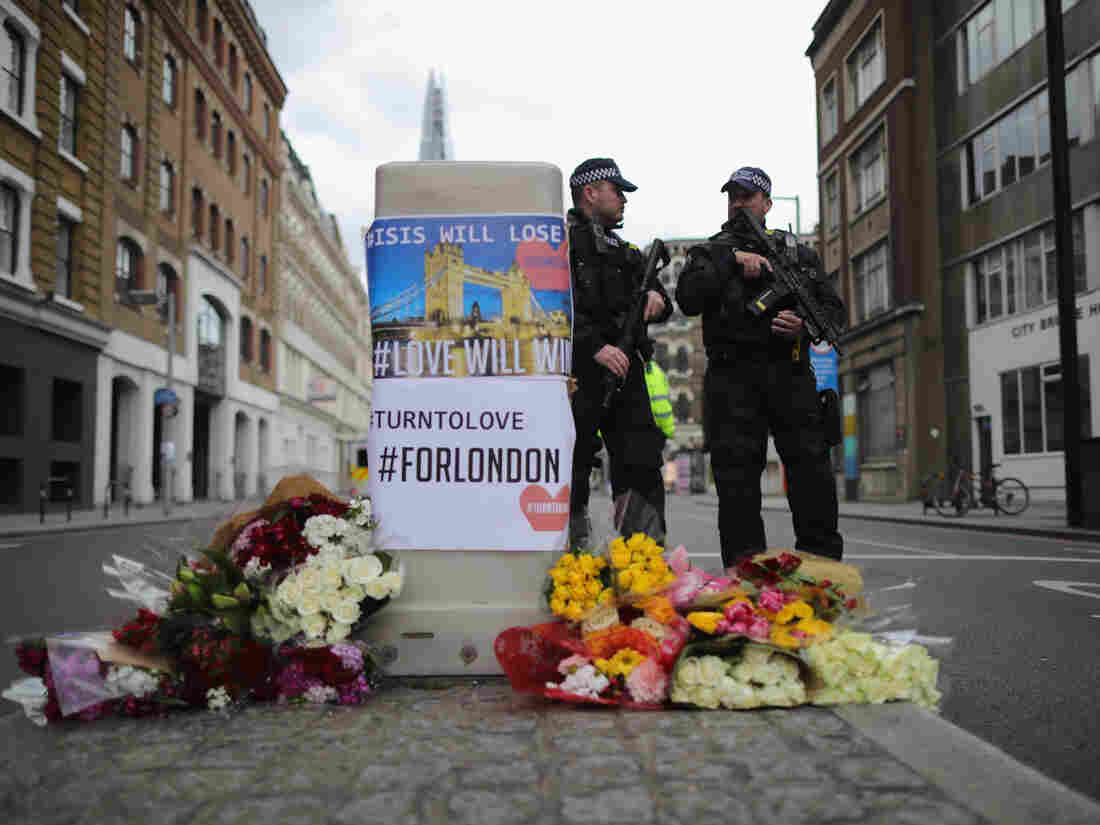 Police stand guard behind flowers left in memorial on Southwark Street near the scene of Saturday’s terror attack in London.

The attackers and the investigation

On Sunday, police arrested 12 in the east London neighborhood of Barking; police say searches of buildings in the neighborhood continue. The BBC reports that police raided a flat thought to be owned by one of the attackers.

A man named Furqan Navi lives on the block in Barking that was raided. He told The Guardian that he had seen a photo of one of the men shot dead by police, and recognized him as his neighbor:

“He lived there with his wife and two children, he’d been there for about three years. He seemed pretty friendly but I didn’t know him,” Navi said.

Another neighbor said he had seen the man two days ago. “He seemed a friendly, cool sort of guy. He was friendly and liked playing with kids. He was in his 20s I guess.”

Another woman in the neighborhood told The Guardian she had the same experience, recognizing one of the suspects in a photo that was circulating after the attack:

” ‘I realised it was him,’ she said. ‘It is shocking. Everybody here has children and jobs. We never thought anyone here would have the type of mentality to do something like that. I used to see them every night, He had a wife and child and would drop them off home and would look for a parking spot.

” ‘He never used to communicate with the women here. I just knew him as the guy that always came at a certain time and would drop his wife and kid off right close to the main door and then go.

” ‘He never used to park where he should park. He never really looked at us and if he did he didn’t look happy as if he had a why are women out on the street at this time of the night type of look on his face.’ She said he wore traditional Islamic robes and his wife wore a full-face veil.”

Reuters reports that police also conducted a search of a building in London’s East Ham neighborhood on Sunday.

Seven people were killed in the attack; another 48 were injured. Reuters reports that 21 of the victims are in critical condition.

Prime Minister Justin Trudeau said that a Canadian citizen was among those killed.

Those injured include a British Transport Police officer an off-duty officer with the Metropolitan Police, and a journalist named Geoff Ho, who reportedly was stabbed in the throat when he tried to assist a wounded bouncer.

An Australian waitress named Candice Hedge was having a drink at the bar after her shift at Eliot’s Cafe when a man came up behind her and slashed her throat, according to the Brisbane Courier-Mail. She told family members that she was recovering well.

Also among the reported victims are citizens of France, New Zealand, and Spain.

In an address Sunday outside 10 Downing Street, Conservative Prime Minister Theresa May asked for new laws against terror. She said that “while the recent attacks are not connected by common networks … They are bound together by the single evil ideology of Islamist extremism.”

“Defeating this ideology is one of the great challenges of our time, but it cannot be defeated by military intervention alone,” she said. “It will only be defeated when we turn people’s minds away from this violence and make them understand that our values – pluralistic British values – are superior to anything offered by the preachers and supporters of hate.”

She also pointed to the internet and “the big companies that provide internet-based services” as “the safe space” that allows extremism to breed, which The Guardian notes is a reference to an initiative she championed at the G7 last month, in which she wants internet companies to remove extremist content.

May said eliminating real-world safe spaces for extremists would require not only “taking military action to destroy Isis in Iraq and Syria. But it also means taking action here at home.” There is, she said, “far too much tolerance of extremism in our country. So we need to become far more robust in identifying it and stamping it out across the public sector and across society.”

“That will require some difficult, and often embarrassing, conversations. But the whole of our country needs to come together to take on this extremism, and we need to live our lives not in a series of separated, segregated communities, but as one truly United Kingdom.” 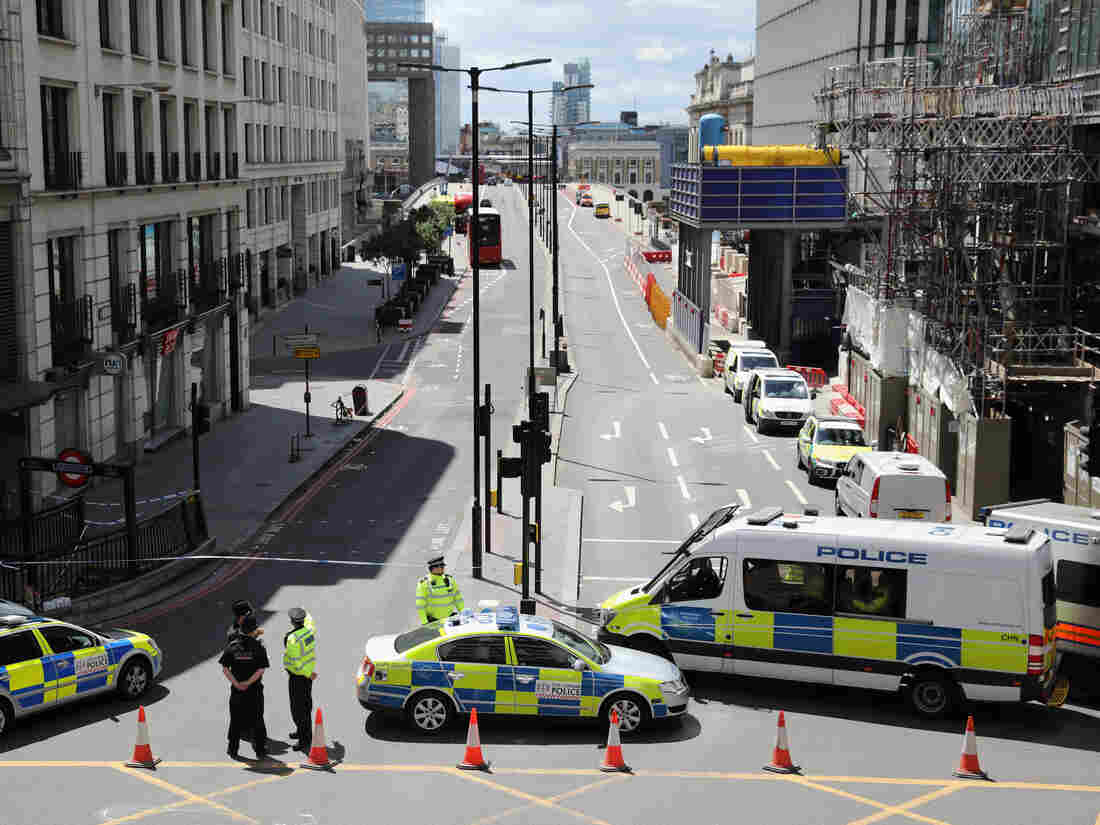 Police operate a cordon on the north side of London Bridge on Sunday. Dan Kitwood/Getty Images hide caption

Police operate a cordon on the north side of London Bridge on Sunday.

May said that “the security and intelligence agencies and police have disrupted five credible plots” since the Westminster attacks in March.

The Labour Party’s shadow foreign secretary, Emily Thornberry, told the BBC that May’s statements appeared to breach a no-campaigning agreement that Labour, Conservatives, Liberal Democrats and the SNP had made after the attacks:

“None of the things [May] is proposing in the four-point plan are immediate steps, and so I regret the timing of this. There is an agreement between the parties that there will not be party political campaigning until this evening or tomorrow.

“We need to do more but we also need to be sensitive to the fact that there are people who are only just discovering that their loved ones have died.”

Saturday night, President Donald Trump tweeted his support of the U.K.: “Whatever the United States can do to help out in London and the U. K., we will be there – WE ARE WITH YOU. GOD BLESS!”

Trump’s next tweet was more political: “We need to be smart, vigilant and tough. We need the courts to give us back our rights. We need the Travel Ban as an extra level of safety!”

In a series of tweets Sunday, Trump criticized London Mayor Sadiq Khan, writing “At least 7 dead and 48 wounded in terror attack and Mayor of London says there is “no reason to be alarmed!”

What Khan said in the interview that Trump seemed to reference was this: “Londoners will see an increased police presence today, and over the course of the next few days. No reason to be alarmed. One of the things the police and all of us need to do is make sure we’re as safe as we possibly can be. I’m reassured that we are one of the safest global cities in the world, if not the safest global city in the world. But we always evolve and review ways to make sure we remain as safe as we possibly can.”

Then Trump turned his attention to the weapons used by the attackers. “Do you notice we are not having a gun debate right now? That’s because they used knives and a truck!” he tweeted.

The UK has strict gun control; its laws were tightened after a mass shooting of schoolchildren in 1996. Since then, the country has had just one mass shooting: a 2010 incident in which 12 people were killed.

Saturday’s attack in London was significantly less deadly than the 2015 attacks by gunmen and suicide bombers in Paris, in which 130 people were killed.