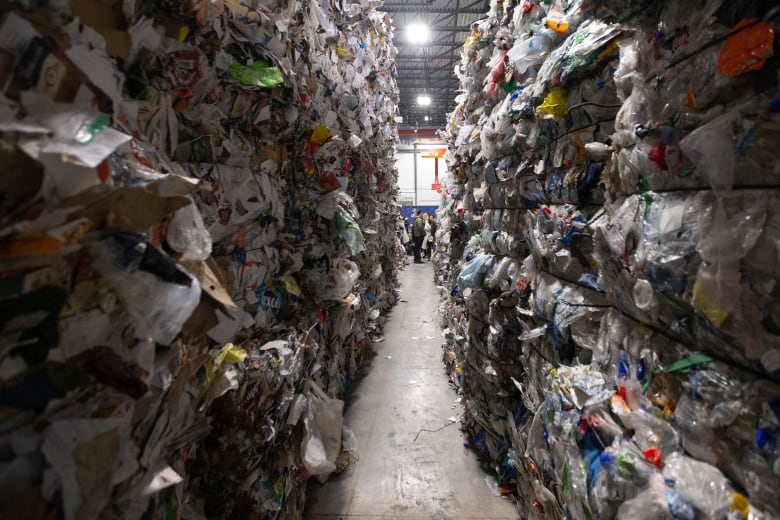 If Montreal thinks it will be easy to extricate itself from its dealings with the recycling company flagged for allegedly withholding money from the city and shipping contaminated paper bales abroad, it need only look at Ricova’s dealings with other Quebec municipalities.

Ricova Services Inc., based in Brossard, Que., has been operating Montreal’s only two recycling sorting centres, in Lachine and Saint-Michel, since 2020 and collects curbside recycling from two of the city’s boroughs.

A review of court documents and municipal contracts shows it also collects recycling in at least seven municipalities on the island of Montreal.

And when it hasn’t been awarded the contract, as happened in 2019 in the west-end municipality of Côte Saint-Luc, it has been quick to take legal action for alleged lost profits.

As its reach has expanded, Ricova has come under increased scrutiny for the quality of its work and its accounting practices.

At the city’s two recycling centres, sorted materials have been found to have high contamination levels, which makes it difficult to sell and ultimately, recycle.

According to a recent presentation to city council, the level of contamination in sorted paper bales has hovered around 25 per cent at the two centres, although that level was cut to 15 per cent at Saint-Michel in January.

The improvement is likely due to new equipment Ricova installed last November.

At the more modern Lachine plant, Ricova has blamed faulty sorting equipment and filed a $5.5-million lawsuit last year against the manufacturer to buy new machinery. That case is still before the courts.

The city’s inspector general began to investigate Ricova after receiving several complaints about a potential conflict of interest.

Known as the BIG, the bureau oversees city contracts to prevent and identify potential corruption, fraud or other illegal acts.

In her report, inspector general Brigitte Bishop alleged the company did not pay Montreal its fair share of recycling profits.

She said Ricova Services Inc. had sold recyclable materials to one of its sister companies, Ricova International Inc., which then sold them to outside buyers at a higher price.

In all, the report alleges Ricova withheld more than $1 million it owed the city for recycled materials it sold over a 12-month period.

She recommended the city cut ties with the company “as soon as possible” and place the company on a blacklist for five years.

Ricova denies any fraudulent activity and it appears the company will not relinquish its Montreal contracts without a fight.

The company sent a legal letter to the city last month, threatening to sue if the city follows through on Bishop’s recommendation to cut them off.

In an emailed reply this week to CBC News, Stéphanie Dunglas, a spokesperson for Ricova, questioned why an investigation was conducted in the first place.

“If [the city] felt that the recycling buyback by Ricova International was a problem, then why didn’t we talk about it before we bought the operations from the bankrupt sorting centres? At no time since the resumption of operations has the City of Montreal expressed its opposition to the sale of sorted materials to Ricova International.”

Dunglas added that any impression it is litigious is a “misconception,” saying the company’s “mission is to serve our customers, but like any business, we are also entitled to defend ourselves.”

With the threat of court proceedings, the city has remained silent on its next steps.

But how does Montreal become untangled from a company that seems to control so much of the recycling industry and has proven it will go to court to defend its interests?

Documents show Ricova has a track record of submitting the lowest bid on contracts, but it hasn’t always been able to meet its commitments.

In 2018, the borough of Côte-des-Neiges—Notre-Dame-de-Grâce ended its contract with Ricova after residents complained of collection delays.

The company blamed those problems on an unexpected increase in the amount of recyclables it was asked to collect.

A year later, Ricova lost out on a recycling contract in Côte Saint-Luc, even though its bid came in $30,000 lower than that of its competitor. (By law, rules for public tenders means the lowest bid is awarded the contract as long as the company meets all the requirements.)

When a company makes a submission for a contract, bidders are asked to provide five references.

According to Ricova’s statement of claim, Côte Saint-Luc ruled out Ricova’s bid after some municipalities it had listed as references gave the company negative reviews.

Ricova claims it never had the chance to refute this unfavorable feedback.

According to court documents, Ricova said it was told only after the contract was awarded to a competitor that its bid was non-compliant, which the company felt was unfair.

It is suing the city for lost profits which it claims amount to more than $138,000.

Côte Saint-Luc isn’t the only municipality that became mired in legal proceedings with Ricova in recent years.

Last year, Ricova successfully sued Laval for awarding its sorting contract to Tricentris, a recycling co-operative, without going to tender.

Laval was forced to put the contract up for tender, and earlier this month, the city awarded the contract to Tricentris once again — even though its bid was higher than that of Ricova.

In a statement announcing the agreement, Laval Mayor Stéphane Boyer praised Tricentris, saying it “demonstrates transparency in its processes and places environmental protection at the heart of its concerns.”

Récup Estrie,the agency responsible for recycling for the city of Sherbrooke and five smaller municipalities in the Eastern Townships, is also in a legal dispute with Ricova.

In 2018, after ongoing problems with Ricova over overflowing recycling bins at its Sherbrooke sorting centre, Récup Estrie broke its contract with the company and gave it five days to get out.

A new operator is in place at the sorting centre, but Récup Estrie and Ricova are still stuck dealing with suits and countersuits.

Ricova also filed a lawsuit against three communities on Montreal’s South Shore — Chambly, Mont Saint-Hilaire and Saint-Basile-Le-Grand — in an attempt to recoup money it says was lost when the recycling market collapsed after China closed its borders to most foreign recycling in 2018. In 2020, the judge ruled against the company. Ricova is appealing the judgment.

Many other municipalities on the island of Montreal have contracts with Ricova for collection, including Beaconsfield, Kirkland, Baie-D’Urfé and Westmount.

Hampstead signed a contract last month with Ricova, about a week before the Montreal inspector general’s damning report. Ricova’s bid was $504,000 — $174,000 less than the closest bidder.

After the report was published, Hampstead Mayor Jeremy Levi said he was concerned about how the possible fallout might affect his town’s 8,000 residents.

He said Hampstead city council considered dropping the contract with Ricova and going back to tender but decided that wasn’t the right way to go.

The city is keeping a close eye on how the contract dispute plays out, but if Montreal manages to pull Ricova’s contract, it may lead to financial uncertainty for the company.

Levi is worried this could have repercussions for municipalities that use Ricova for collection services.

If Ricova decided to shut down operations in Hampstead, there are very few suppliers to turn to.

“It’s a niche market,” said Levi. “When you’re giving out long-term contracts and large contracts and voluminous contracts, it creates that type of monopoly where it doesn’t really bode well for new players to come in.”

Dunglas, speaking for Ricova, said the company remains committed to providing the “best possible quality of service to the satisfaction of our clients.”

In the case of Beaconsfield, Ricova took over the city’s collection contract after it acquired the assets of RSC in 2020.

Andrew Duffield, Beaconsfield’s director of sustainable development, said the municipality has worked hard to reduce waste production by, among other things, charging residents for their garbage.

But Duffield acknowledged there’s only so much they can do when it comes to recycling once what’s collected has left the community.

He hopes the quality problems at the recycling plants and the BIG report won’t cause residents to lose faith in the benefits of recycling.

“My prime consideration was to ensure that our residents understand that even if the sorting purity levels aren’t optimal yet, that by ensuring that these materials go into the blue bin in Beaconsfield, they have the greatest chance to be recovered, recycled and then be reused locally,” he said.