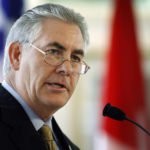 The U.S. says some of the demands by four Arab countries as conditions to lift the sanctions over Qatar would be difficult for Doha to meet.

The U.S. Secretary of State, Rex Tillerson, in a statement on Sunday recommended that the countries sit together and find an amicable compromise to the crisis.

Bahrain, Egypt, Saudi Arabia and the United Arab Emirate had accused Qatar of backing terrorism, a charge it denied.

Tillerson said: “Qatar has begun its careful review and consideration of a series of requests presented by Bahrain, Egypt, Saudi Arabia and UAE.

“While some of the elements will be very difficult for Qatar to meet, there are significant areas which provide a basis for on-going dialogue leading to resolution.”

According to him, a productive next step would be for each of the countries to sit together and continue this conversation.

“We believe our allies and partners are stronger when they are working together towards one goal which we all agree is stopping terrorism and countering extremism.

“Each country involved has something to contribute to that effort. A lowering of rhetoric would also help ease the tension.

On Saturday, Qatar’s foreign minister rejected the list of 13 conditions imposed by the four countries.

The conditions have put Qatar under unprecedented diplomatic and economic sanctions for more than two weeks.

The four countries also want Qatar to reduce its ties with Iran and close a Turkish military base, setting a deadline on Friday of 10 days.