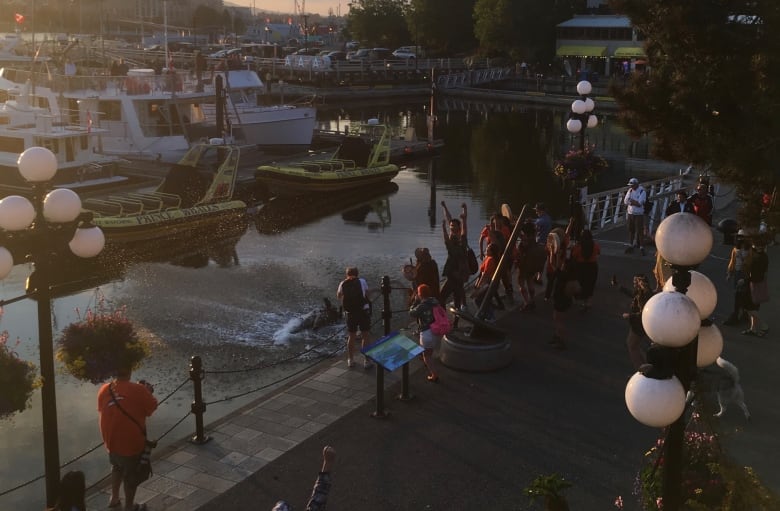 Two incidents of vandalism on Vancouver Island Thursday night and Friday morning could be related, according to RCMP.

A statue of Capt. James Cook, an 18th century British navigator, explorer and map-maker, was torn down and thrown into the Inner Harbour of B.C.’s capital on Thursday night.

Police were nearby at the time for a ceremony on the legislature lawn where thousands of people had gathered.

“It was really quite a moving and profound gathering and ceremony, just a sea of orange downtown to reflect on the painful legacy of the residential school system in Canada,” said Victoria Police Department spokesperson Cam MacIntyre.

At about 8 p.m., some people started breaking off from the gathering and marched toward the statue on the 700-block of Government Street, he added.

Once they arrived, the statue was pulled down and thrown into the water.

In addition to sailing to Australia, New Zealand and throughout the Pacific, Cook is known for landing on the west coast of Vancouver Island in 1778. He anchored in Nootka Sound before continuing an expedition to search for the Northwest Passage. He was unsuccessful in that effort and died in Hawaii the following year during a dispute with islanders.

Victoria resident Rick Gudz was on his boat in the Inner Harbour when he said between 400 and 500 people moved into the area.

He said a young woman took control of the crowd, and protesters gave speeches before throwing the statue into the water.

“It was definitely dramatic for Victoria,” he said.

Police say they have identified “several” suspects, but could not go into detail as their investigation remains ongoing.

“Our job, our role in any of those situations is to make sure people are allowed to protest,” MacIntyre said. “They have a right. There’s nothing more Canadian on Canada Day than to protect that right to a safe, peaceful and lawful protest.”

“However, damaging property mischief, criminal offences are not enshrined in the Charter of Rights and Freedoms.”

MacIntyre said anyone who was simply protesting will not be targeted, but those that participated in property damage will.

“Property damage is not acceptable. It’s a criminal offence,” he said.

Hours later, a totem at the Malahat lookout, about 30 kilometres from where the Capt. Cook statue was toppled, was set on fire early Friday morning.

Shawnigan Lake RCMP say they were contacted just after 4 a.m. by a driver who saw the totem on fire. The Malahat Volunteer Fire Department responded to extinguish the fire.

“Fresh graffiti was also located at the scene, speaking to recent events in Victoria where a statue of James Cook was pulled down and thrown in the Victoria Harbour, based on what was written, we feel the two incidences are related,” said detachment commander Sgt. Tim Desaulniers in a media release.

The news release included a photo showing the words “one totem — one statue” spray painted on the cement barrier in front of the partially burned pole,

Evidence from the scene has been seized and investigators are working with the Vancouver Island forensic identification section to identify a suspect.