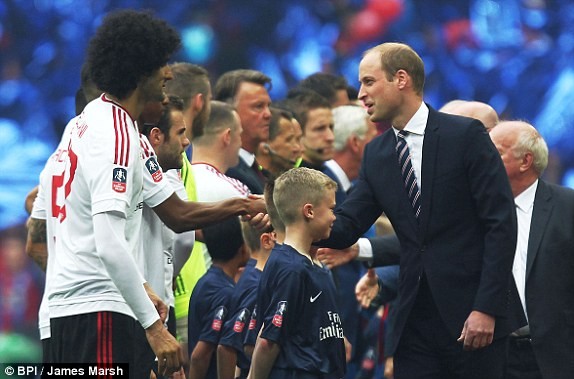 The Duke of Cambridge, who is the president of The Football Association, laid a wreath on the field of Wembley Stadium before the match between Arsenal and Chelsea. A suicide bomber killed 22 people, including children, at Manchester Arena Monday after an Ariana Grande concert.

Kensington Palace posted a photo of the prince at Wembley as well as a pic of a note he penned, that read, “We will never fear coming together to celebrate all that unites us. In memory of the friends and family taken from us in Manchester.”

A moment of silence for the victims was also observed at Wembley, where some 90,000 people gathered as armed police stood guard and a police helicopter circled above amid a heightened terror alert in the U.K.

“We stand together,” read the jumbo-tron.

William issued a statement after the attack on behalf of himself, wife Kate Middleton and brother Prince Harry.

“Like everyone, Catherine, Harry and I are left shocked and saddened by the tragedy that unfolded in Manchester overnight,” William wrote. “Hundreds of friends, parents, children and partners are confronting unimaginable grief today, and we send our thoughts to them all. We also send our thanks to the people of Manchester for their display of strength, decency and community that is an example to the world.”