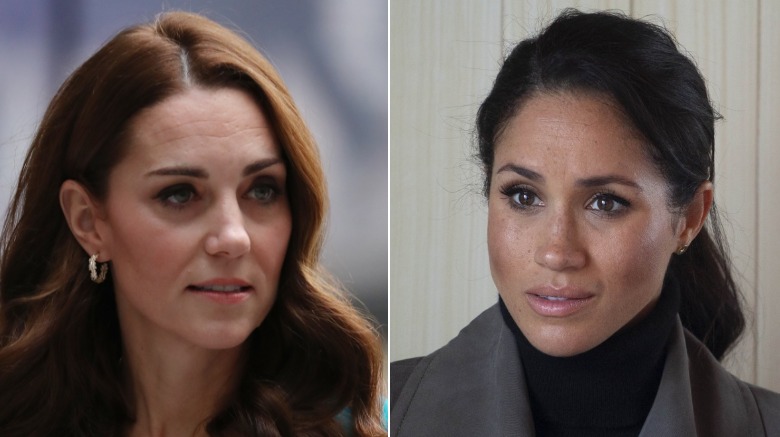 Prince Charles is so over the royal drama.

During an appearance on the Australian morning show Sunrise on Friday, Jan. 25, 2019, royal family biographer Robert Jobson claimed that the Prince of Wales has put an end to the alleged ongoing feud between duchesses Meghan Markle and Kate Middleton, The Sun reports.

“There’s some truth in the rumors,” Jobson alleged, adding, “I think there’s no smoke without fire. I do think it has been blown up a little bit, but there have obviously been a few problems between the two ladies and even between the two princes.” Of the supposedly fed-up prince, Jobson said, “I’m sure at Christmas Prince Charles was knocking heads together, and you can see that by those photographs of them all walking together in a line.”

Readers may remember that, following weeks of ongoing speculation surrounding growing tensions within the British royal family, the so-called “Royal Fab Four” — Markle, Prince Harry, Middleton, and Prince William — were spotted walking together through the English countryside on Christmas Day to the Church of St. Mary Magdalene at Sandringham. The royal family’s high-profile outing appeared to be a cordial occasion for the Sussexes and the Cambridges, who were all smiles during their morning stroll.

At the time, it seemed the reportedly feuding couples had finally been able to put to rest any lingering rumors amid the holiday season. For his part, Jobson seemed to suggest that the moment may have been encouraged by the duchess’ father-in-law himself, claiming, “They looked like they had been pushed together in a line, to be honest.”

However, it should be noted that the royal pairings reportedly went on enjoy a festive luncheon at Queen Elizabeth II’s nearby estate, before settling in to watch her annual Christmas speech to the nation (via the Daily Mail). “Closer to home, it has been a busy year for my family,” the queen said in a sweet nod to her loved ones (via Time). “With two weddings and two babies, and another child expected soon, it helps to keep a grandmother well occupied.”

Unfortunately, rumors surrounding Markle’s bond with the Duke and Duchess of Cambridge, both 36, wasn’t the only bad press she endured in late 2018. In addition to claims made about her alleged treatment of key staff members, the former Suits actress reportedly acquired the unflattering nickname of “Duchess Difficult” from royal staffers. Meanwhile, reports that Prince William had been concerned over his younger brother’s choice in a wife also surfaced. Further fueling this hearsay at the time were reports that Markle and Prince Harry planned to distance themselves from the Duke and Duchess of Cambridge with their move from Kensington Palace to Frogmore Cottage on Windsor Estate (via People). However, a Kensington Palace rep has since told The Sun that “none of this is true.”

Despite a reportedly “frustrating and stressful” few months of battling tabloid gossip, the Duke and Duchess of Sussex have had one major reason to celebrate. As Nicki Swift previously reported, Markle, 37, and Prince Harry, 34, who tied the knot at St. George’s Chapel at Windsor Castle in May 2018, are expecting their first child together. Earlier this month, Markle showed off her growing baby bump during a royal outing while sharing some major news about her pregnancy: baby no. 1’s due date is in late April or early May. At the time, Rebecca English of the Daily Mail tweeted, “Meghan said she didn’t know whether they were having a boy or a girl. She said she wants it to be a surprise!”

According to a source recently cited by Us Weekly, the soon-to-be-parents have been keeping plenty busy preparing for their child’s birth and scouting out hospitals for the delivery. Claiming that their top choice is their local Frimley Park Hospital, the insider said, “It will be much less chaos and more of a private event than if she gives birth in London [at high-profile St. Mary’s Hospital] like Kate did.” Indeed, the birth of Kate Middleton and Prince William’s third child, a son named Prince Louis, became a highly-publicized affair in April 2018. The proud parents are also mom and dad to Prince George, 5, and Princess Charlotte, 3.

If Prince Charles’ reported intervention among the royal sisters-in-law did little to ease their alleged tension, we imagine the exciting arrival of the British royals’ newest little addition might just help do the trick.