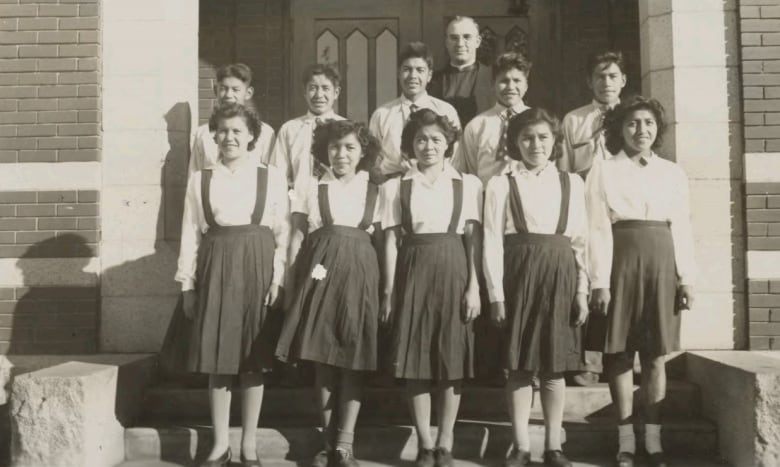 A Mississauga, Ont., priest is under fire after a sermon referencing the “good done” by the Roman Catholic Church in residential schools, saying some might go so far as to even thank it.

During his sermon at the Merciful Redeemer Parish last Sunday, Pastor Owen Keenan referenced the Kamloops, B.C., residential school where the Tk’emlúps te Secwépemc First Nation reported it had discovered the preliminary remains of more than 200 children in unmarked graves in May.

“Two thirds of the country is blaming the church, which we love, for the tragedies that occurred there,” he said on a video originally posted to the church’s YouTube page but since deleted. Clips of his sermon continue to circulate on social media.

“I presume the same number would thank the church for the good done in those schools, but of course, that question was never asked and we are not allowed to even say that good was done there. I await to see what comes to my inbox.”

A clip of Keenan’s comments sparked outrage on social media, with one person tweeting that the priest’s comments were “really disgusting” and that “the Church is not the victim.”

Mississauga Mayor Bonnie Crombie, a practising Catholic, said  she was “extremely disappointed” by her pastor’s comments about residential schools.

Reading from a prepared statement at a news conference Thursday, the mayor called Keenan’s homily “deeply insensitive to Indigenous Canadians, particularly at a time when Indigenous communities are in pain as they unearth more mass graves at the sites of former residential schools.”

“His comments show a fundamental misunderstanding of one of the core tragedies of the residential school system in Canada,” she said. “The children were forcibly separated from their parents.”

Crombie said how Canada’s history has been taught obscures the truth behind what really happened: The federal government and many churches, including the Catholic Church, operated these schools for close to 150 years, committing atrocities and silencing voices forever.

“No apology from the federal government or the church will be enough to undo the havoc that was reaped through these institutions,” Crombie said. “But an apology is where we must start. It’s a basic and it’s a fundamental foundation to our reconciliation.”

Dr. Suzanne Shoush, who is Indigenous, works for the Catholic-run health network Unity Health Toronto. She is demanding the Pope apologize for the church’s role in residential schools. She said comments like those made by Keenan are damaging to reconciliation and exemplify why Catholic leaders need to intervene.

“This is part of the reason why we keep pushing to have a formal asking of forgiveness to Indigenous people in Canada from the Pope himself,” she said.

“It’s really critical that it comes from the leadership so that we stop having these incredibly ignorant and harmful comments coming from across the church. I think that what we’re seeing is extremely harmful to reconciliation.”

Keenan also said in his sermon that while the church should apologize for its participation in the “ill-devised government project,” it should also wait to find out who was buried at the Kamloops site and why before “rendering ultimate judgment.”

Residential school survivors have shared horrific accounts of abuse, starvation and neglect, and difficulties getting  documents from the Catholic Church, which ran the majority of  the schools. The final 2015 report of the Truth and Reconciliation Commission begins by stating that what took place at residential schools “can be best described as ‘cultural genocide.'”

“The church actively sought to exercise exclusive control over the welfare of these children and therefore are exclusively responsible for the conditions which these children lived in,” Shoush said.

In a statement to CBC News Wednesday, Keenan defended his comments, saying that he was trying to help his congregation struggling with negative news about the church.

“I am deeply sorry, embarrassed, ashamed and shocked at the revelations of abuse, destruction and harm done in residential schools across this country,” he said in the statement. “I in no way condone the system …  As a Catholic and a priest, I wish I could say ‘I’m sorry’ to everyone who suffered harm.”

The Archdiocese of Toronto said in a statement it’s been in contact with Keenan “to convey the deep pain and anger” some felt. He has “pledged to fully educate himself” about the history of residential schools.

“We apologize to anyone offended by his remarks,” the archdiocese said.

In the same sermon, Keenan criticized Catholic schools for flying Pride flags this month, saying the church had hoped they’d show “courage” by displaying a cross or sacred heart instead. He described the Pride flag as “the standard of contemporary sexual licence” that’s replacing Catholic symbols.

Keenan did not respond to questions from CBC News about his comments toward the LGTBQ community.

Crombie said she told Keenan his comments have no place in the city of Mississauga.

“He expressed his shame and remorse,” she said.

LGBTQ activist Keith Baybayon, who is also a student trustee with the Toronto Catholic District School Board, said members of the Catholic Church have ramped up these kinds of comments as more Ontario school boards agree to fly Pride flags every June. The flag holds a special meaning of inclusion for the LGBTQ community that the cross doesn’t, he said.

“Flying the Pride flag can really express solidarity that the school boards have with their LGTBQ students and staff, ensuring that they belong, their voices are heard,” Baybayon said.