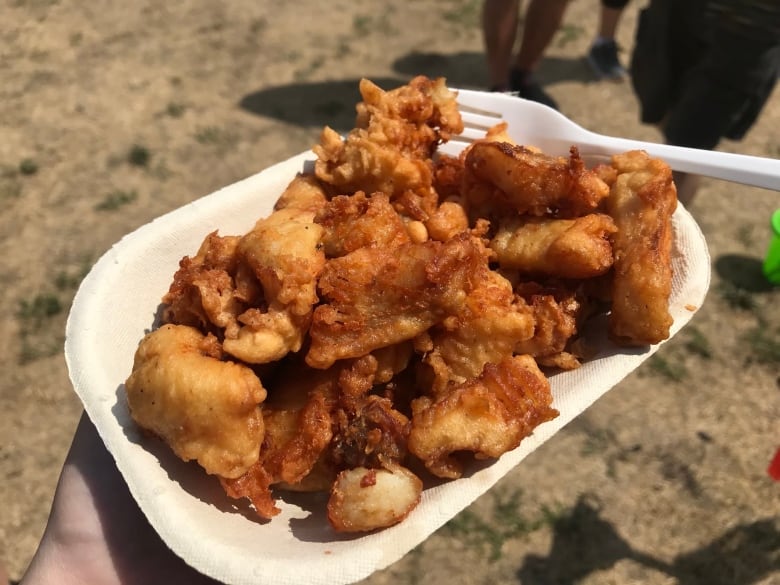 The Echoes of a Proud Nation Pow Wow will sell reusable cutlery to curb the use of single-use plastics. (Jessica Deer/CBC)

Every July, the Echoes of a Proud Nation Pow Wow in Kahnawake, Que., attracts thousands, and powwow committee member Lynne Norton said the waste adds up.

Norton said by the end of the weekend, two dumpsters capable of holding 40 cubic yards of debris each are overflowing. That’s about 240 13-gallon trash bags, mostly waste from hungry powwow attendees buying food.

“There’s not as much recycling as we should have,” said Norton.

While they have recycling bins on site, Norton said, remnants of Indian tacos, fish, and other powwow treats often get chucked into the bins, contaminating the recycling in hot temperatures.

This year, they will be making changes to help cut the amount of single-use plastics. They’ll be selling reusable cutlery at the July 13-14 powwow. Come next summer they will ban Styrofoam.

“There’s a lot of waste,” said Norton. “When you look at everything all together, knowing so much is being wasted … some of those forks are just being thrown out; it’s a small thing that can change.”

Last month, Prime Minister Justin Trudeau announced the federal government intends to ban single-use plastics as early as 2021. That includes grocery bags, food packaging, straws, cutlery and bottles — many of the items used to serve food at powwows across Canada.

The changes are being welcomed by the team at Tóta Ma’s Café, an enterprise established for an employment program in Kahnawake. It will be their first year vending at the powwow.

“It’s very important, especially because people are outside and sometimes they will just want to throw stuff on the ground as opposed to actually walking to a garbage can. So we love the idea of reusable cutlery,” said Adriana Garisto, café co-ordinator. 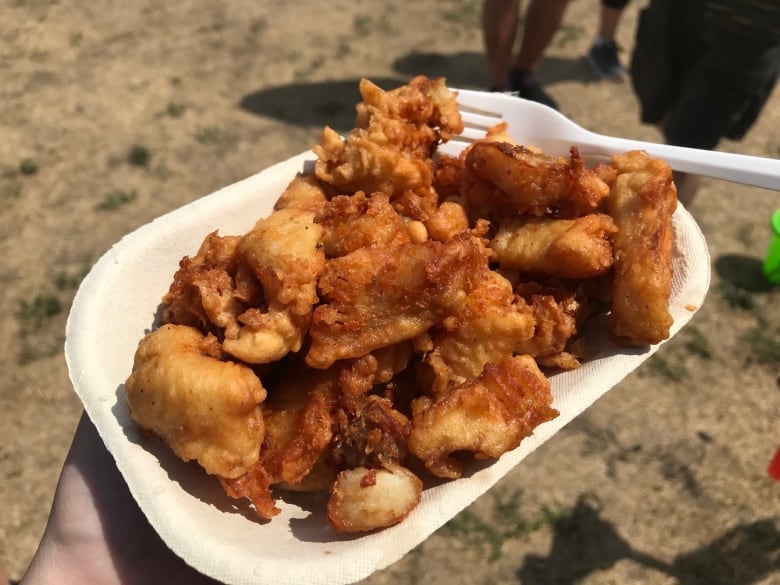 Walleye nuggets are a staple at Kahnawake’s Echoes of a Proud Nation Pow Wow. (Jessica Deer/CBC)

The café is contributing by serving their drinks in backyard compostable paper cups without lids.

It’s a situation all too familiar to Lita Isaac in Listuguj, a Mi’kmaw community on Quebec’s Gaspé coast.

Lita Isaac in Listuguj, a Mi’kmaq community on Quebec’s Gaspé coast, has been with the Listuguj Pow Wow since its founding in 1993. Their powwow, which takes place Aug. 3-4, is taking similar measures this summer to become more environmentally friendly.

The committee plans on banning Styrofoam next year, and this year ordered biodegradable cutlery to serve their free breakfast and evening feast, and for each food vendor.

“There’s such a strong awareness with plastic … we serve so many people during our feast. It feels bad to waste so much,” said Isaac.

They’re also encouraging vendors to make more environmentally friendly choices, and those who do will have a chance to win a free vending spot next summer.

“Our ancestors, when they would hunt, they would make sure they only took what they needed and they would share,” said Isaac.

“Today, being one of the biggest cultural events in Listuguj, it’s overwhelming the use of plastics and Styrofoam, so it’s a great step to take the initiative.”

Isaac hopes other events in her community and other powwows across the country follow suit.

“It is expensive, but it’s worth it. It feels good to put some of that money to save the environment,” she said.