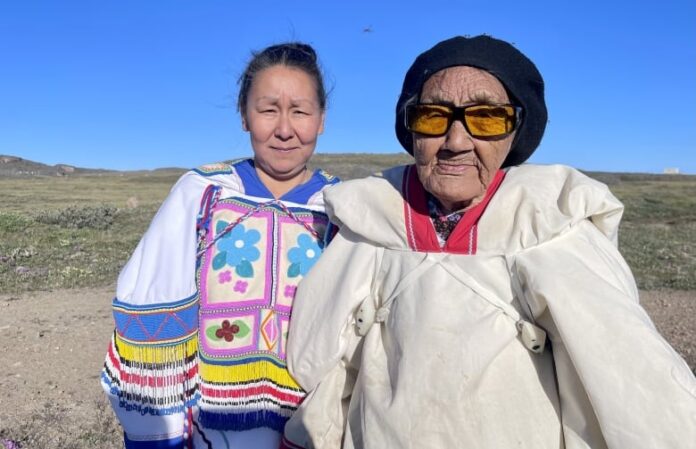 Residential school survivors, politicians, Inuit throat singers and drummers will be among the crowds meeting Pope Francis as he wraps up his Canadian trip with a short visit to Nunavut’s capital on Friday afternoon.

It will mark the first-ever papal visit to Canada’s newest territory, and for some, a potential turning point in a fraught century-long relationship between the Catholic Church and the Inuit of Canada.

“Once the Pope apologizes, we must find a way to move from that. To start heading forward,” said Mary Ajaaq Anowtalik, an 84-year-old elder from Arviat, Nunavut, speaking in Inuktitut, ahead of the papal visit. Anowtalik will be part of a throat-singing performance before the Pope in Iqaluit.

Anowtalik sees the visit as an opportunity for the Pope to “start on a different path.”

“In the old days, if there was someone that needed guidance, they would be brought to the elders, for life skills, guidance,” she said, through a translator.

Anowtalik’s comments hint at a dynamic shift that’s happened in recent years amid conversations about colonialism, reconciliation, and the legacy of residential schools. Where once the church and its leaders presented themselves as spiritual guides for Indigenous people, they’re now seen by some in Nunavut as the ones needing guidance.

“I just want to hear him say that the church is open without prejudice for everyone,” said Aksaqtunguaq Ashoona, who will be among a group of Inuit greeting the Pope when he deplanes in Iqaluit.

“That’s all I want to hear him say. Like, apologize and reopen the church gates.”

There is a small Catholic parish in Iqaluit, and the city is one of 16 communities in the Canadian Arctic with a Catholic population. Some communities have permanent missions with a priest or a sister, others are attended by visiting priests or sisters.

Speaking to the Vatican News recently, Iqaluit’s Catholic bishop Anthony Wieslaw Krótki acknowledged that Iqaluit does not have a large Indigenous Catholic population, and that more Inuit in the city are Anglican. Iqaluit was chosen for the papal visit simply because of logistics, he suggested.

But the church’s historic legacy looms large in many parts of the territory.

The first permanent Catholic mission in the eastern Arctic of Canada was established on the western shore of Hudson Bay, at Chesterfield Inlet in 1912 by Arsène Turquetil.

Decades later, the students’ residence named for him in Chesterfield Inlet — Turquetil Hall — would become notorious as a site of physical and sexual abuse of young Inuit. Between 1955 and 1969, hundreds of children were sent there, far from their homes and families. Many other Inuit children were sent to the equally notorious Grollier Hall, in Inuvik, N.W.T.

Some residential school survivors will be in Iqaluit on Friday, including former Nunavut commissioner Piita Irniq, who will be part of the official delegation greeting Pope Francis. According to a draft itinerary of the papal visit, Irniq will have about five minutes to testify before the Pope.

The Pope will spend about two and half hours in Iqaluit, arriving just before 4 p.m. ET and leaving at around 6:20 p.m. ET.

Where to watch the pope’s Iqaluit visit

Pope Francis takes a tour of Iqaluit with community members, then departs Canada.

Support is available for anyone affected by residential schools, and those who are triggered by the latest reports.

The Indian Residential School Survivors Society (IRSSS) can be contacted toll-free at 1-800-721-0066.

In addition, the NWT Help Line offers free support to residents of the Northwest Territories, 24 hours a day, 7 days a week. It is 100% free and confidential. The NWT Help Line also has an option for follow-up calls. Residents can call the help line at 1-800-661-0844.