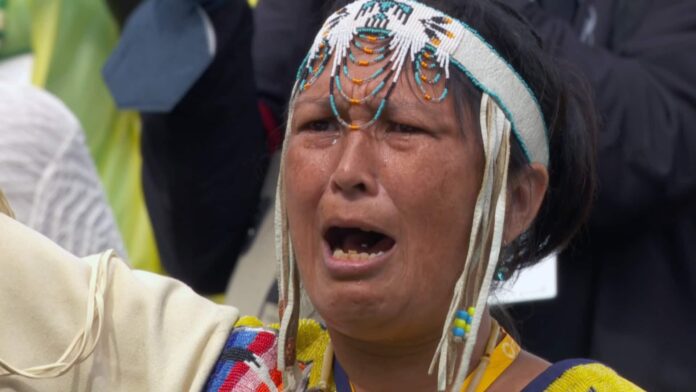 It was a raw, powerful moment that seemed to stop time — a song performed emotionally in Cree to the tune of Canada’s national anthem by an Indigenous woman wearing traditional regalia.

In an interview Thursday with CBC News, Si Pih Ko, also known as Trina Francois, said the song lyrics were an ancient ballad to the land and the village. Other local language speakers have translated it as: “Our creator, keep our sacred land, Canada. Our land here, Canada. Our Sacred Land.”

After she sang, over applause and cheering from the crowd in Maskwacis, Alta., Si Pih Ko spoke directly to Pope Francis in Cree, her voice strong in its anguish.

“You are hereby served spoken law. We, the daughters of the Great Spirit and our tribal sovereign members cannot be coerced into any law, any treaty that is not the Great Law,” she translated later for CBC News. 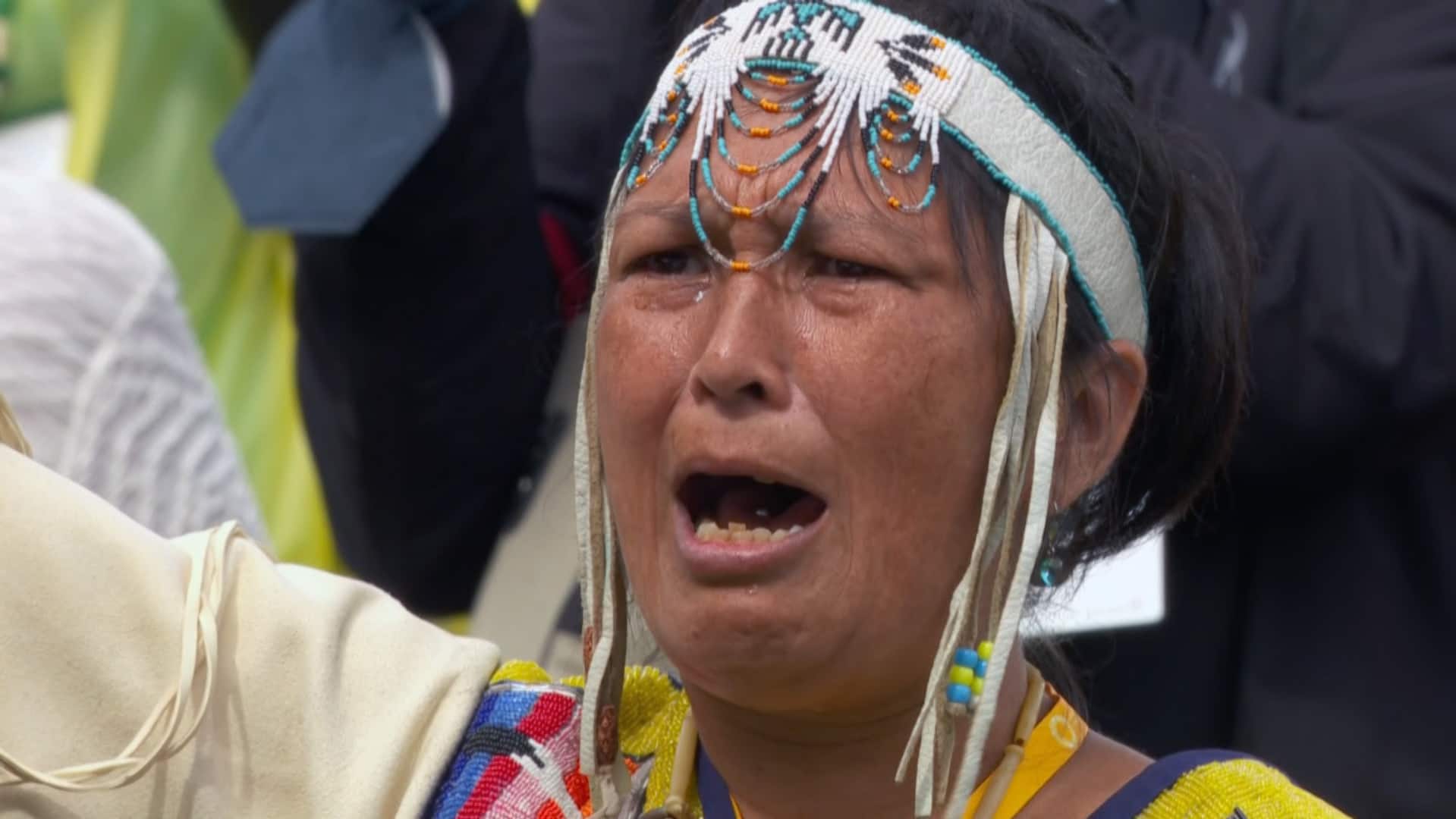 Si Pih Ko, also known as Trina Francois, sang a message in Cree to the tune of the national anthem in an unscripted moment during Pope Francis’s visit to Canada.

“We have appointed chiefs on our territories. Govern yourselves accordingly. ‘Hiy Hiy’ does not mean ‘Thank you.’ It means that I have nothing more to say,” she said to the Pope in Cree.

Si Pih Ko hadn’t planned to speak during the ceremony to mark the first day of Pope Francis’s “penitential pilgrimage” to Canada, but said she had to when the Pope was given a headdress and he put it over his skull cap, or zucchetto.

“Silence is power, but I couldn’t remain silent,” she said later to CBC News.

‘She took a stand’

In Edmonton, Métis Sixties Scoop survivor Brenda Hatt watched it all, tears running down her face. She said she felt — for the first time — like someone was speaking for her.

“She put her fist up in the air. That is a very strong symbolism across the world. She took a stand,” said Hatt, 54.

Growing up in English households, Hatt didn’t learn her traditional language, so she didn’t understand exactly what was being said.

But she said it resonated deeply.

“You could feel the passion and pain in her voice,” she said. “She spoke for a lot of people across Canada and the fact it’s a woman is even that much more powerful.”

The moment has been shared around the world on social media, with people saying they were shaken to the core, her pain like a knife to the heart.

‘She spoke from her perspective as a woman’

“I love the fact that she had the courage to say what she said and to take a stand for what she believes in,” said Thomas, who heads the community’s Nihitho Language and Culture Unit.

Thomas knows Si Pih Ko personally and is also fluent in the specific Cree dialect she was speaking, “the language of the four winds or the four spirits,” which has been passed down by elders living in northern Manitoba and Saskatchewan.

Thomas said it’s hard to translate the words precisely into English, but she used the term for the land of Canada, Kakanatahk, which means “that which is sacred.”

“She spoke from her perspective as a woman. She includes herself in the language when she speaks and she’s saying that we are like a part of a sovereign group and we are the women of the group,” Thomas said.

The message itself was a rebuke to the Pope, the Catholic Church and the colonizing countries of Britain and France, he said.

“They had no right to come in and do what they did to displace our traditional ancestral, sacred laws that we had in place,” he explained.

“She’s asserting that we still have that and that we wish that to be respected and that the Pope should acknowledge that.”

‘She spoke for many of us’

Back in Edmonton, Brenda Hatt says the message is even more powerful now that she understands it.

“She got our point across, not just her point, but our point across … That we’re still here, that, even through all of this, all the hundreds of years of trying to wipe us out in Canada — and I don’t say that lightly. There was a plan to genocide the Indigenous people of Canada. But you know what? We’re still here.”

Hatt said it feels like a turning-point in her own life.

Taken from her mother by Alberta Social Services when she was just four weeks old, sent to what she describes as “horrendous” foster homes and later adopted at age 13 by a white family, she’s trying to connect with her lost Métis heritage. Hatt recently learned her late grandfather was a residential school survivor.

“I lived in a foster home where she told me outright she was going to beat the Indian out of me and I didn’t even know at that point that I was Indian or what Indian was. But I had that instilled in me at such a young age that it was something to be ashamed of, that I didn’t look into anything to do with my familial lineage until I was in my 40s,” Hatt said.

Hatt isn’t religious and said the Pope’s apology doesn’t mean much to her, although she’s glad he asked for forgiveness of all the survivors of residential schools.

Still, she’ll take one thing forward from his visit this week.

“And to belong to a group of people that have survived hundreds of years where they weren’t supposed to survive is a powerful message. And her standing, stepping forward, putting your fist in the air and stating, ‘We are still here.’ How can anybody not be proud of her?”

“I hope that it brings the people back to the land. Our way of life,” she said.

An activist most of her life, Si Pih Ko is living in a teepee as part of a protest camp on the grounds of the Manitoba Legislature. She said this experience has given her more confidence to give voice to her on-going battle against the child welfare system.

“I fought two years to get my little ones back, and it shouldn’t have been like that,” she said.

“Residential schools continue in the child welfare system, and if I had to ask the survivors today, ‘What would you like me to do? To speak for the little ones today, that are in care?’ Because I’ll do whatever it takes. Your pain, your words, through me. I’ll get it done.”