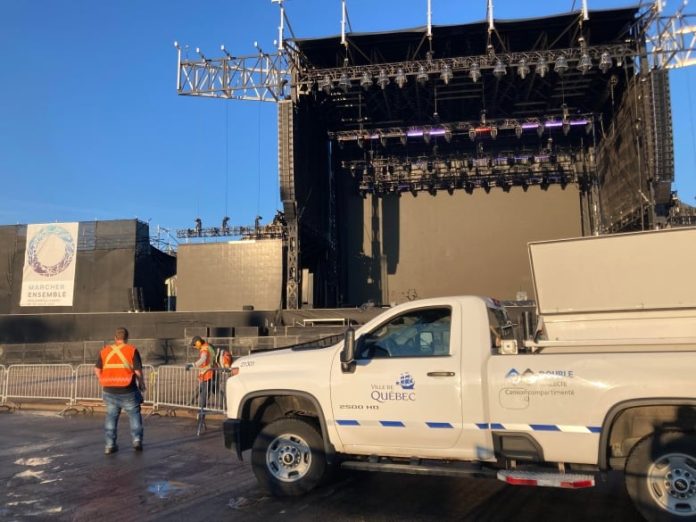 Pope Francis is set to arrive in Quebec City today as part of his ongoing “pilgrimage of penance” being taken to advance reconciliation and healing between the Roman Catholic Church and residential school survivors in Canada.

He will be in the Quebec City area until Friday as part of the week-long trip to Canada, before making his final stretch of the trip to Iqaluit.

The Pope is scheduled to arrive in Quebec City at around 3 p.m. at the Jean Lesage International Airport. Those looking to catch a glimpse of the pontiff on his drive into Old Quebec can stand along De l’Aéroport Road, or along Grande Allée by the Plains of Abraham from Bougainville Avenue to the Citadel.

From there the Pope is expected to make his way to the Citadel, where he will meet with Governor General Mary Simon and Prime Minister Justin Trudeau, before he prepares for his address to the public.

The address will be broadcast at 4:45 p.m. on giant screens to crowds on the Plains of Abraham. The screens will be located behind the Manège militaire de Québec and in front of the Musée national des beaux-arts du Québec.

Pope Francis is then expected to travel by Popemobile to the Plains along George VI Avenue East, before his convoy heads toward the Archdiocese of Quebec, not far from the Château Frontenac hotel.

Musical performances by First Nation, Inuit and Québécois artists will also take place on the Plains as of 1:30 p.m., and are expected to last until 7 p.m.

A group of 13 residential school survivors is due to arrive at the Plains Wednesday, following a seven-day, 275-kilometre walk from the Innu community of Mashteuiatsh in the Saguenay–Lac-Saint-Jean region. Once there, they will recount their experiences on stage.

The community is home to the last residential school in Quebec, Pointe-Bleue, which closed in 1991. The survivors hail from the Innu, Anishinaabe, Naskapi, Wendat and Atikamekw nations.

On Thursday the Pope will hold a mass at 10 a.m. at the Sainte-Anne-de-Beaupré Basilica, about 30 kilometres northeast of Quebec City.

Hundreds of Indigenous community members and delegates visited the basilica on Tuesday morning for Catholic feast of Saint-Anne. Every summer, hundreds travel to Sainte-Anne-de-Beaupré for the pilgrimage, even busier this year with the upcoming mass.

Florence Penashue was at the basilica alongside her 94-year-old grandmother, Mary Odele Penashue, and says this is her third time making the pilgrimage.

“I’m hoping for everyone to just forgive each other, to forgive one another and to love one another as Jesus said,” said Penashue, who came with her grandmother all the way from Sheshatshiu, N.L.

“I’m so happy that I’m here, that God gave me a chance to be here with my grandmother,” she said with tears in her eyes.

“It means to me that he wants to reconcile, restore what was broken and apologize to the Indigenous people,” she added.

Joe Peastitute said it was important for him to attend the mass Tuesday because he’s not sure how much longer he’ll be here. He’s been staying in Quebec City for medical support after suffering a stroke and broken leg.

“I want to see what he will do for the people,” said Peastitute, from the Kawawachikamach nation about 15 kilometres northeast of Schefferville, Que. But he said he doesn’t have high hopes.

“As people we lost quite a bit,” he said. “I just want to pray for my people, and the people that I lost, my parents, my grandparents, that’s why I came here.”

The mass on Thursday will be held in Spanish, the Pope’s native language, with English and French subtitles on the outdoor screens. People can also watch the mass on the papal visit website, which will have a live translation of the event into 12 Indigenous languages.