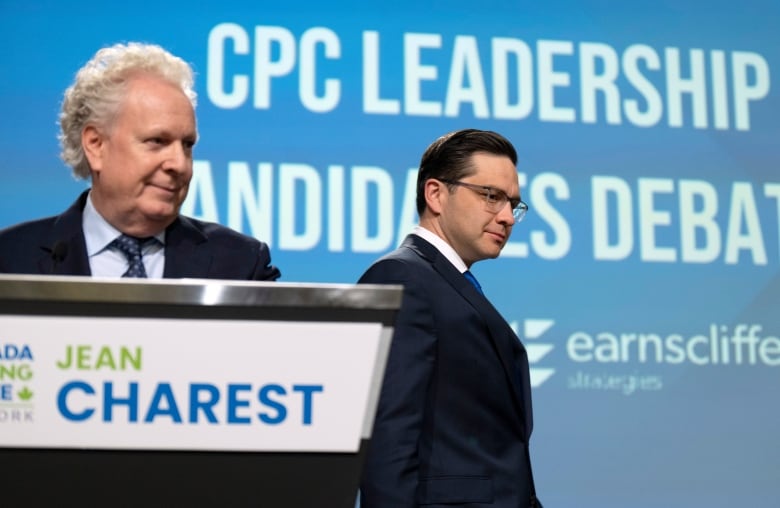 Conservative Party of Canada members have chosen Ontario MP Pierre Poilievre to be their new leader.

In the end, it wasn’t much of a contest. Poilievre easily clinched victory with an impressive 68.15 per cent of the available points on the first ballot — a decisive result that puts the right-wing and populist politician in a strong position to lead a united party into the next general election.

Poilievre didn’t just dominate in the points — he nearly swept every riding in the country.

Of the 338 electoral districts in Canada, Poilievre lost only eight to his main opponent, former Quebec premier Jean Charest.

Charest won six ridings in Quebec and two in Ontario — Ottawa-Centre and University-Rosedale in Toronto.

The campaign was nasty at times. Poilievre was in a pitched battle with Charest — a more moderate Tory — not only for the leadership but for the party’s identity.

Poilievre accused Charest of being a closet Liberal, while Charest slammed his opponent in turn as a radical who has sought the support of criminals associated with the Freedom Convoy.

But tonight, party members left little doubt about who they think is best positioned to lead them into the next election. Charest got just 16.07 per cent of the points allocated in this preferential ballot election.

Speaking to a crowd of hundreds of Conservatives who gathered to see their candidate take the crown, Poilievre sought to heal those wounds.

The MP thanked Charest for helping to fight off the ‘yes’ vote in the 1995 referendum in Quebec.

“You have made Canada your project and our nation is ever grateful,” Poilievre said.

As for Poilievre’s other opponents, Conservative MP Leslyn Lewis — the lone social conservative candidate in this race — took just 9.69 per cent of the points.

Former Ontario MPP Roman Baber, a vocal critic of COVID restrictions, took 5.03 per cent, while MP Scott Aitchison, a former mayor in Ontario’s cottage country, took about 1 per cent of the points.

Poilievre dominated this leadership race all along. He racked up big caucus support — 62 MPs and seven Conservative senators supported this candidacy — and raised more than $6.7 million. Charest, by comparison, was endorsed by 16 MPs and raised just $2.7 million. 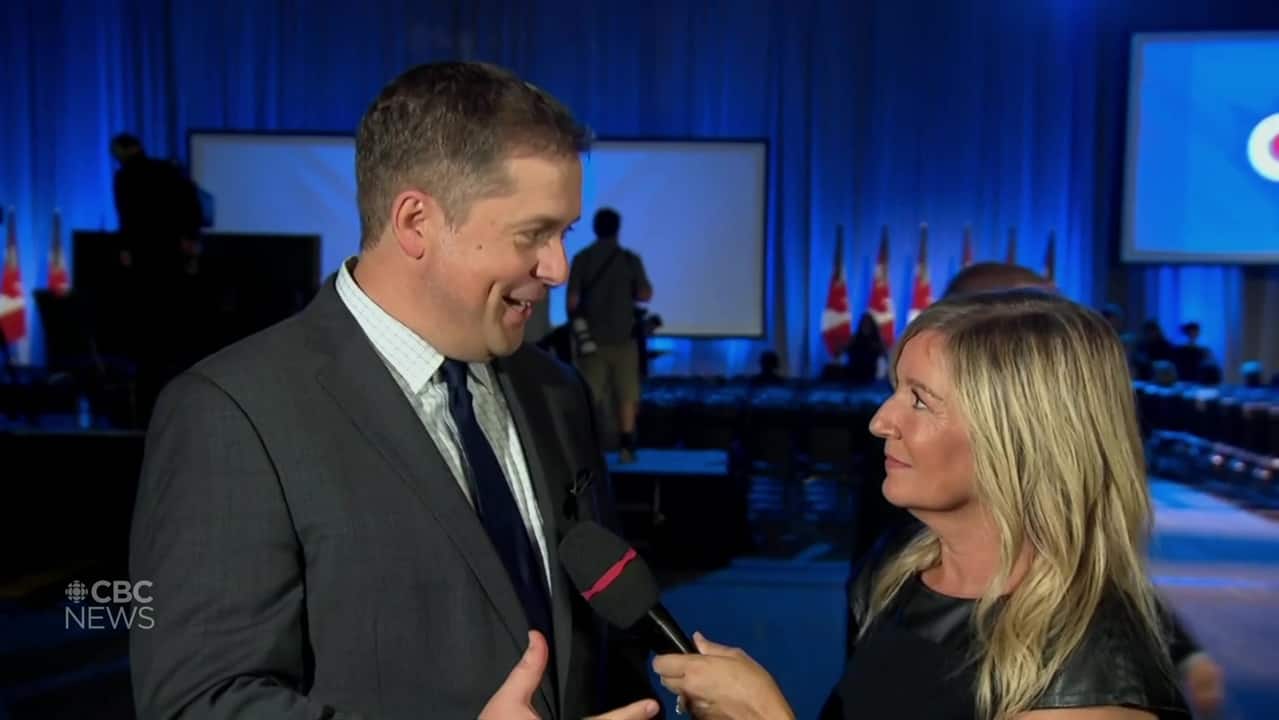 The former leader of the Conservative Party supports Pierre Poilievre as the new leader and says Poilievre helped to increase the party’s membership through his message to Canadians.

Poilievre has upended Canadian politics with his firebrand style. He has promised to fire the Bank of Canada governor — a historically non-partisan position — and has accused him of failing to rein in inflation.

Poilievre has railed against COVID-19 restrictions and the federal government’s vaccine mandate for travellers and public servants.

He’s also branded himself as a fighter for the blue collar, working class — a man who will take on the elites and Liberals.

Poilievre routinely criticized the World Economic Forum during the leadership race — he has said that, if he becomes prime minister, he would forbid his cabinet ministers from attending the annual summit in Davos, Switzerland. But he made no mention of it in his speech.

The WEF has inspired outlandish conspiracy theories, with some claiming that members of a shadowy global elite are intent on taking over Western nations like Canada.

Poilievre vows to put Canadians ‘back in control’

In his speech Saturday, Poilievre made it clear which issue he’ll put front and centre: the economy.

“Today, people feel like they have lost control of their pocketbooks and lives. Tonight begins the journey to replace an old government that costs you more and delivers you less — with a new government that puts you first,” Poilievre said.

“Your paycheque. Your retirement. Your home. And your country. By tackling Liberal inflation, we’ll put you back in control of your money and your life.”

The new leader of His Majesty’s Loyal Opposition will take the reins of a party that is eager to unseat Prime Minister Justin Trudeau and end his nearly seven-year-old government — which has been beset by problems in recent months like ongoing airport chaos, passport processing delays, a backlogged immigration system and sky-high inflation.

Despite those issues, recent federal polling suggests the Liberals and the Conservatives are still running neck-and-neck.

And it may be years before the new Tory leader gets the chance to take on Trudeau in a general election because the confidence-and-supply agreement the prime minister signed with NDP Leader Jagmeet Singh earlier this year could ensure the Liberals remain in power until the planned 2025 campaign.

Trudeau congratulated Poilievre on his victory with a tweet.

Congratulations, <a href=”https://twitter.com/PierrePoilievre?ref_src=twsrc%5Etfw”>@PierrePoilievre</a>, on being elected Leader of the Conservative Party tonight. As Parliamentarians, we must work together to deliver results for people across the country. Canadians expect – and deserve – nothing less.

Poilievre’s campaign platform was relatively thin but his primary rallying cry was a promise to make Canada the “freest country on earth.”

Poilievre said Canadians will come onside with the Conservatives in the next election because they’re tired of a Liberal government that “sneers” at them.

He has vowed to fire government “gatekeepers” — a catch-all term for bureaucrats he blames for making daily life more difficult.

Indeed, the loudest cheers from the crowd Saturday came when he promised to dump the federal government’s “diastrous” ArriveCAN app — the smartphone application which is used to show proof of a COVID-19 vaccination at the border — and when he said he’d get rid of vaccine mandates in all areas of federal jurisdiction. 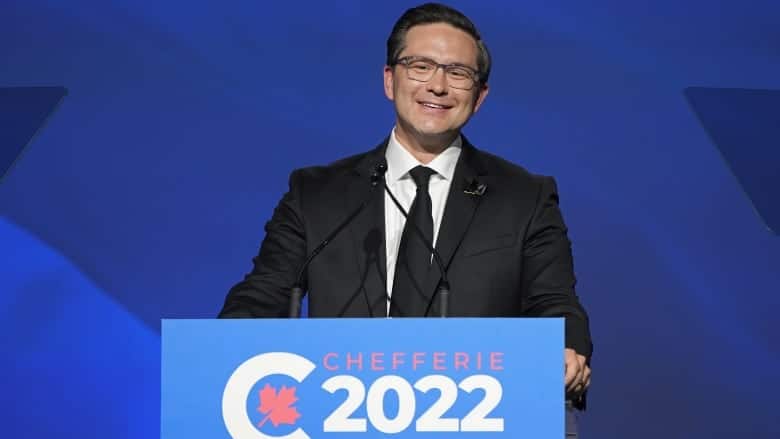 In his victory speech Saturday, new Conservative Party of Canada Leader Pierre Poilievre made it clear which issue he’ll put front and centre: the economy.

Poilievre was first elected in 2004

Poilievre was first elected in 2004 as one the youngest MPs in the House of Commons. He represents the Ottawa-area riding now called Carleton.

He entered the leadership contest beloved by many members of the party’s grassroots as one of its highest-profile MPs and most effective performers in Parliament.

The MP rose to prominence after the Conservatives defeated the Liberals in 2006.

In 2008, Harper named him to serve as his parliamentary secretary. It was through that role that the young Poilievre earned a reputation as an attack dog with a style his critics called overly aggressive and, at times, immature.

In 2013, Poilievre was appointed to serve as democratic reform minister. In that government’s dying days in 2015, before it fell to the Liberals, he briefly served as employment minister.

Poilievre is married with two young kids. His wife Anaida, whom he wed in 2017, works on Parliament Hill as a political staffer.