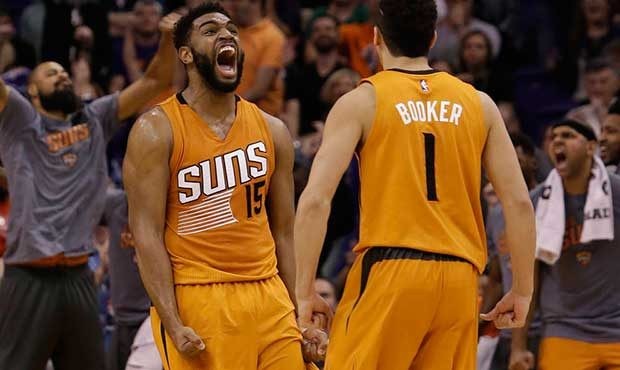 PHOENIX – The Phoenix Suns have re-signed forward/center Alan Williams to a multiyear contract.

“Alan embodies what it means to be a Phoenix Sun on and off of the court,” said Suns General Manager Ryan McDonough. “We’ve enjoyed watching him become a very valuable part of our team over the past few years. We’re excited that we were able to reach a deal to keep a native Phoenician home, where we know ‘Sauce’ will continue to make a significant impact, both on the court and in the community.”

Since initially signing a 10-day contract with the Suns on March 8, 2016, then signing a multiyear deal on March 18, Williams has averaged 6.6 points and 5.8 rebounds in 57 career NBA games, all with Phoenix. In his 20 career games in which he has played at least 20 minutes, “Big Sauce” is averaging 13.2 points on 54.1 percent shooting, 11.2 rebounds, 1.40 blocks and 1.20 steals with 16 double-doubles. The 6-8, 260-pound post player is averaging 15.3 rebounds per 36 minutes for his career, second behind only Andre Drummond for the highest of any active player.

A two-time state champion while attending Phoenix’s North High School, Williams is just the second Phoenix-born player in franchise history (Bernard Thompson), the third born in Arizona (Thompson, Bryce Cotton) and the fifth to play high school basketball in Arizona (Thompson, Cotton, Gerald Brown, Channing Frye). Williams had an outstanding four-year collegiate career at UC Santa Barbara, leaving as the Gauchos’ all-time leading rebounder and second-leading scorer. After going undrafted in 2015, he played the 2015-16 season with Qingdao DoubleStar of the Chinese Basketball Association, leading the CBA with an average of 15.4 rebounds in 35 games, in addition to scoring 20.8 per contest.