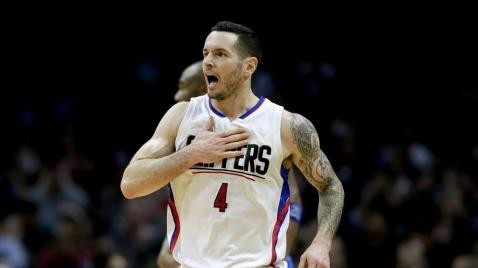 A 6-foot-4 guard, Redick finished 2016-17 with the Los Angeles Clippers averaging 15 points and two assists in 28 minutes per game while shooting 43 percent from three-point range and 89 percent from the free-throw line over 78 appearances (all starts).

“We are really excited to add one of the game’s truly elite shooters in JJ Redick, who should fit perfectly with our pace-and-space offense. JJ works as hard as anyone in the league to get open looks, but his job will be made easier with the playmaking and facilitating mindset of players like Joel Embiid, Markelle Fultz, Dario Saric and Ben Simmons,” Sixers President of Basketball Operations Bryan Colangelo said.

Entering his 11th season, the 33-year-old holds the league’s 14th-highest all-time three-point percentage at 42 percent. He has finished in the top five in three-point percentage the last three seasons, including first in 2015-16, shooting a career-best 48 percent clip from beyond the arc. The Duke product was drafted with the 11th overall pick in the 2006 NBA Draft by the Orlando Magic after he was named 2006 Associated Press Collegiate Player of the Year.

All told, he’s played in 690 career games (319 starts) with the Clippers, Milwaukee and Orlando and holds averages of 12 points, two rebounds and two assists in 25 minutes per game. He’s shot 45 percent from the field, 42 percent from three-point range and 89 percent from the free-throw line (10th all-time).

A 6-foot-9 forward, Johnson has appeared in 745 career games (461 starts) with Boston, Toronto and Detroit. He holds career averages of eight points, six rebounds and one assist in 22 minutes per game while shooting 57 percent from the field and 67 percent from the free-throw line. His 57.4 percent field-goal percentage ranks seventh-best in NBA history and fourth among active players. This past season with Boston, Johnson posted seven points, five rebounds and a career-high two assists per contest.

“Amir Johnson is an ideal veteran addition for our young basketball team. Amir is that iron horse type of producer who impacts a team in so many positive ways on the court, but his value will also be felt in the locker room and in our community,” Colangelo said.

A 12-year NBA veteran, Johnson averaged 10 points per game in back-to-back seasons from 2012-14 with Toronto. He was originally selected in the second round (56th overall) of the 2005 NBA Draft by Detroit out of Westchester High School in Los Angeles, California. He was a 2005 McDonald’s All-American.

Redick will wear No. 17 with Philadelphia, while Johnson will don No. 5.