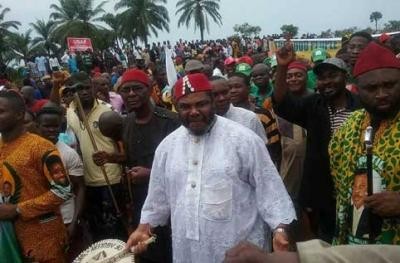 Five persons have been reported killed in a land dispute at Nteje, Oyi local government area of Anambra State.

The traditional ruler of the community, Igwe Rowland Odegbo, disclosed this to newsmen in Awka, the state capital on Monday.

He said 18 persons had been arrested from the community over the dispute, including a 70-year-old brother of a Nollywood actor, Pete Edochie.

He decried incessant harassment of his people by the police from outside the state, stating that his community was under police siege.

He said some of the people killed were the morgue, while most youths in the area had fled the town and hidden in forests for fear of being arrested and taken to Abuja by the powers that be.

The monarch said the land dispute was engineered by land speculators who constituted themselves into a cabal and illegally sold communal land for many years.

He said they were not making any returns to the villagers, hence trouble began which led to the death of three persons on 11th of March this year when two factions involved in the sale of the land clashed.

He said when some soldiers intervened in the matter to quell the riot, one of the groups attacked the soldiers, leading to the death of one other person whose body was still in the mortuary.

Calling on Governor Obiano to set up a panel of enquiry to look into the matter, Igwe Odegbo said: “The major problem we have is that one policeman, who was at the Special Anti-Robbery Squad, SARS, Awkuzu and now an assistant commissioner of police in charge of SARS in Abuja, is being used to come into Nteje and arrest people and take them to Abuja without recourse to the Anambra State police command”.

His statement said “There was even a petition that I, the traditional ruler, should be brought to Abuja and they would have carried me if the Anambra State governor had not intervened.

“I was addressing a village meeting when the policemen came and said that I was needed in Abuja. However, following the intervention of the governor, they asked me to come at my own time, but I knew that was a face-saving measure on their part.

“When one person was killed recently, the same Abuja SARS came to Nteje and arrested many people who are yet to be released.

“I don’t know why Abuja SARS should be bypassing Anambra State police command to come and carry people to Abuja. What borders me is that when three people were killed in March, there was a petition to the police, while another group wrote another petition and included me.

“What has been happening here is that petitions have been flying and arrests made indiscriminately. I really don’t understand why our people should be intimidated by a group and trying to rope in the traditional ruler because someone was opposed to my being crowned the Igwe of Nteje.

“Our community needs help because we are under police siege from Abuja. Those arrested were carried in two buses and taken to Abuja on thumped up charges and I would have been among them if I am not the traditional ruler.”