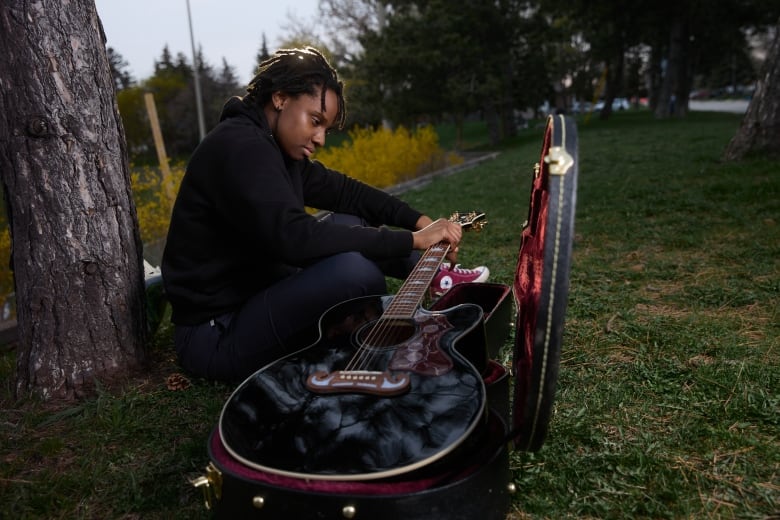 When Lia Mighty came out as lesbian, she thought she would find solace in the community of “rainbows, unicorns and love”; rather, she experienced “racial comments and discrimination.”

“I’ve been called n—-r at least eight times within the LGBTQ+ community,” said Mighty, a musician and model from Montreal.

The 25-year-old often is made to feel like an “exotic tropical thing” over dating apps, where she comes across profiles with disclaimers like “no Black girls welcomed here.” She was also told on a date that “for a Black woman, you’re actually well-educated.”

“I don’t feel included nearly as much as I should be — not even close. I’m safe with my sexuality, but I need to feel safe as a Black woman.”

A report by Egale Canada Human Rights Trust details that lesbian, bisexual and transgender women, as well as gender diverse and two-spirit people, encounter discrimination, stigmatization and violent experiences “at disproportionately higher rates than their heterosexual and cisgender counterparts.”

Mighty said people of colour are even more vulnerable.

“A lot of BIPOC people in the LGBTQ+ community feel not included. Even though these places are supposed to be safe spaces but are avenues of discrimination,” said Kissy Duerré.

Duerré once went out with a man who told her he cannot take her home to his parents because “she is Black and transgender.”

“Canada embraces multiculturalism. It’s a grand statement, but it is not necessarily getting embraced here, especially in the prairie communities,” said Duerré.

Duerré has also witnessed racial fetishization — an experience that was common amongst the LGBTQ+ people of colour CBC News spoke with. A Toronto resident said he was called a “palatable Black” on a dating app. And a South Asian Vancourite cautioned that “the word ‘type’ in gay community is more insidious than we think it is.”

“BIPOC people often get reduced to their body parts, their culture or background — dating world is full of that,” Duerré said, having read dating profiles with anti-trans sentiments.

Duerré has developed “a thick skin and humour” to deal with racism and transphobia, but said many face identity crises and mental health issues as a result.

‘I don’t feel I belong here’

Soon after moving to St. John’s from Nigeria, Abraham Ayuba received vicious insults on dating sites, which he said deteriorated his mental health. He sought therapy after “feeling depressed and having suicidal thoughts.”

“I thought Canada would be a place of no racism and just inclusion,” said Ayuba, a 25-year-old student at Memorial University of Newfoundland. He said being a queer person of colour is not easy, especially when you grow up in a country where being gay is illegal and punishable by time in prison.

Ayuba said that on more than 10 occasions in the recent past, he has faced racial fetishization. He often gets blocked on dating apps — something he thinks is happening because he does not conform to people’s notion of a “stereotypical” Black man.

He said white, gay men seem to not want to be seen with him in public and often request meeting when it’s dark.

“I still don’t feel safe in the community,” he said. “I don’t feel I belong here.”

In 2018, Canada was home to approximately one million people who are LGBTQ+, accounting for four per cent of the total population, according to the Canadian Community Health Survey.

Statistics Canada plans to release more data from the 2021 census later this year, including a cultural analysis of transgender and non-binary populations. The census does not collect data on sexual orientation, so it cannot provide demographic characteristics of the country’s LGBTQ+ population as a whole.

Mighty suggests community members should read up on other people’s backgrounds.

“While utmost respect is earned, mutual respect should be given on a daily basis, but we don’t do that enough in the community,” she said.

In the 32 years since she came out as lesbian, Mirtha Rivera said she has been considered exotic and called a “loud, volatile, irrational Latina” within the LGBTQ+ community. She said she has been treated unfairly because of her accent and command over the English language.

“We — people of colour — feel that we don’t belong in the queer community. We are almost invisible,” said the Regina resident, who hails from Chile originally.

Rivera said “diversity” has become a token word, and queer folks of colour are often insulted and harassed even within supposedly safe spaces.

As the seniors’ co-ordinator at the University of Regina’s Pride Centre, she thinks queer people of colour are needed at the decision-making table to shift conversations from those “sitting in their white power, almost blinded.”

Rivera said the UR Pride Centre has few team or board members who are BIPOC. She said though the centre is discussing the need for better representation, the conversation must be amplified across the Prairies.

“Canada has a lot of hard work to do, and so do our allies, but it needs to be done.”

Ell Bird is one person doing that hard work. The 25-year-old assists with a queer youth group in Moose Jaw, Sask. They said many kids they work with face incessant bullying at school.

Bird, who is part Ojibway, often heard racist comments like “end of the month, cheque season, welfare time” while growing up in Manitoba.

They didn’t expect that to crop up in the LGBTQ+ community, too, but have found themselves at the end of comments like, “you don’t look white enough to be white or Native enough to be Native.”

“I’ve been told Natives are on the low spectrum of society and culture.”

A two-spirit and gender-queer person, Bird said community members often invalidate their experiences and many exercise “wilful ignorance.” For example, they said they often get questioned about their history and deadnamed — when someone’s birth name is used instead of their current one.

Bird said there needs to be more conversations around the need for safe spaces and events specifically for gender-queer people — those who don’t follow binary gender norms — within the context of LGBTQ+ groups.

Alex Sangha thinks his non-profit is one of few in Canada working to address these intersectional issues. Sher Vancouver caters to LGBTQ+ South Asians in Metro Vancouver.

The organization produces podcasts and films that address racism, homophobia and transphobia within the South Asian community. He said queer people of colour and their experiences are underrepresented in the media.

“Queer community has been historically discriminated against themselves. They shouldn’t discriminate against other minorities within the community, but it’s still a major problem.”