CBC anchor’s kind gesture icing on the cake for newlyweds 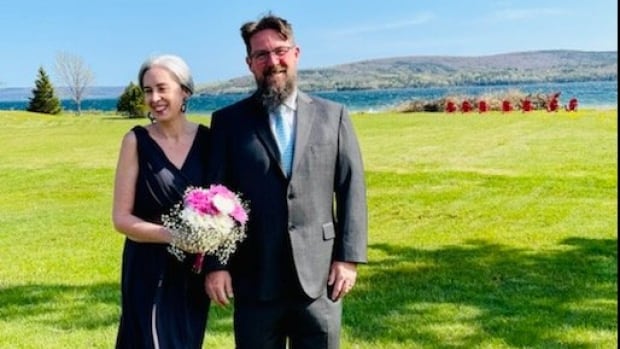 Aaron Dahl had been searching in vain for the perfect tie for his upcoming wedding when he finally spotted it — on television.

It was April 15, and the tie in question — a shimmering arctic blue with a subtle geometric pattern — was around the neck of veteran journalist Ian Hanomansing, who was hosting CBC’s The National that night.

“It was striking. I was looking for a blue tie, something that would match my wife’s wedding dress, but it was just impossible to find the right colour,” Dahl said. “I saw the tie and I’m like, that’s the tie that I want.”

Dahl, who had never met Hanomansing, decided to send him a direct message on Twitter to ask about the neckpiece. The news anchor’s reply came immediately.

“He responded right away and said, ‘Hey, congratulations, send me the address and I’ll send you the tie.”

Dahl, who owns Not Your Father’s Barber in Ottawa’s ByWard Market, did as instructed, then “kind of forgot about it.” About a week later, he opened his mailbox and there was the tie, folded neatly into a padded envelope along with a message from Hanomansing.

“He wrote a really nice card just to say congratulations and he wished us all the best, and he hoped the tie did the job on the day,” Dahl said.

It’s been nice, and such a contrast to what often gets attention on Twitter.– Ian Hanomansing, co-host of The National

On May 21, Dahl wore the tie when he and Brenna Fraser said their vows in an intimate ceremony at Inverary Resort in Baddeck, N.S. The weather was ideal — about 20 C under a cloudless blue sky — and so, too, was the tie, a pure silk number made in Italy by Kiton.

“It was perfect, actually, and looked exactly how I thought it would,” Dahl said.

Hanomansing, who is based in Vancouver, said when he received Dahl’s original query, he’d been dealing with a lot of negative messages on Twitter.

“In the middle of that, I read Aaron’s very simple and polite request: could I let him know where I got the tie. I thought, impulsively, why not just send it to him?” Hanomansing said.

“I didn’t mention it to anyone, because why would I? But his kind thank you tweet got so much positive response, reaction. It’s been nice, and such a contrast to what often gets attention on Twitter.”

Dahl said he received plenty of compliments on his tie, and said the story of how he got it has become a family favourite.