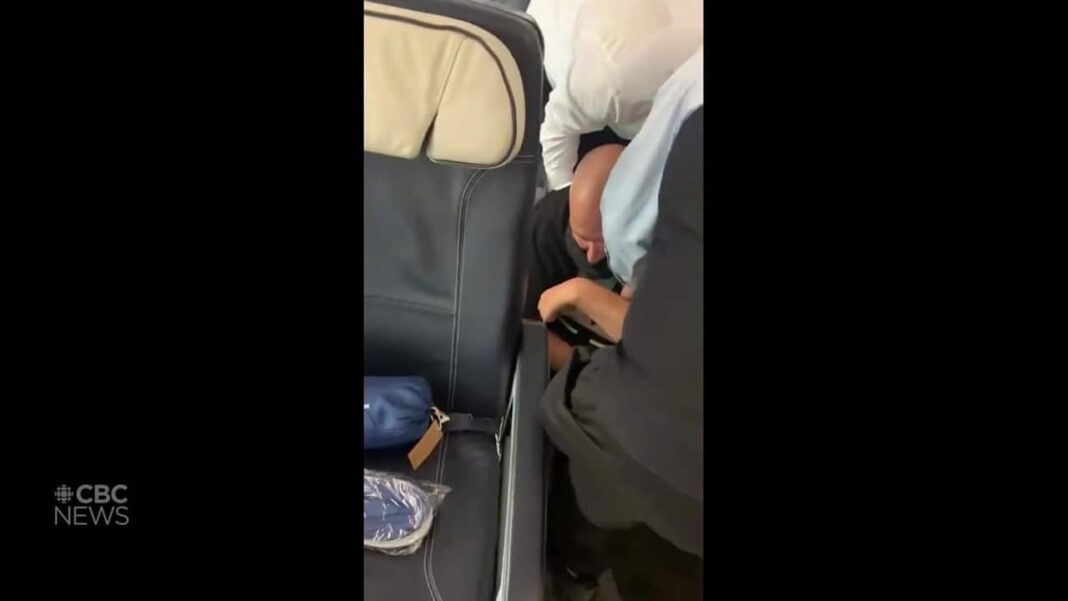 When James Glasbergen boarded an Air Transat flight departing from Toronto to London on June 30, he was excited to begin his journey to see the Rolling Stones play live in Europe.

What the 46-year-old quadriplegic man from Kitchener, Ont., wasn’t looking forward to was getting out of his custom-fitted electric wheelchair and into an airplane seat, as required by federal law.

His concerns turned out to be warranted after airline staff helping to transfer Glasbergen to his seat dropped him in the aisle, setting off a more than three-minute struggle to lift the 200-plus-pound man from the floor and set him upright.

“There wasn’t enough room for them to get me into the seat, and they dropped me,” said Glasbergen, a former travel agent who is paralyzed from the chest down due to injuries suffered during a car accident in 1992.

“All of a sudden, my body hit the floor with a big thud.”

A video Glasbergen posted to YouTube captured the moments just after he fell. It shows him wedged between the seat and a wheelchair while two men struggle to lift him over an armrest and into a seat. 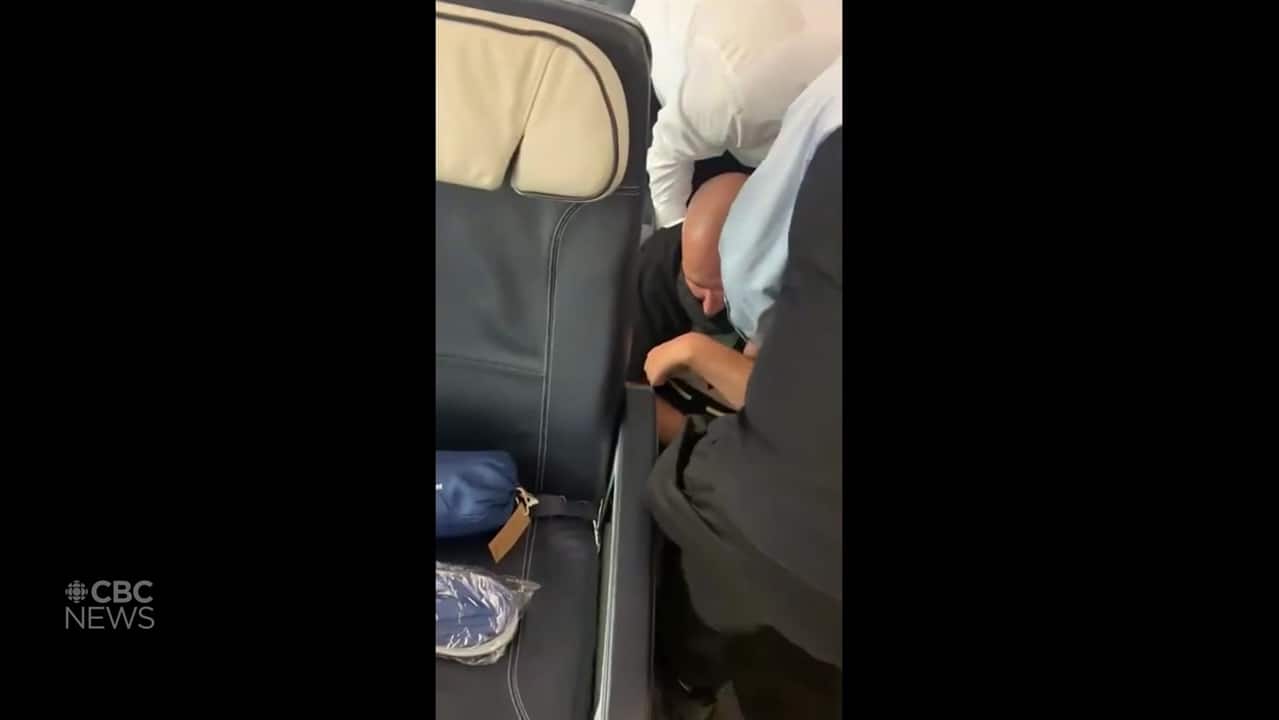 James Glasbergen, who is paralyzed from the chest down, was dropped by airline staff who were helping him transfer from a wheelchair to an airplane seat on an Air Transat flight in Toronto on June 30.

After two failed attempts, a flight attendant and another passenger step in to help and the group successfully seats him.

“There’s absolutely no dignity for people with disabilities that need assistance transferring.”

Glasbergen is calling on airlines and regulators to figure out a way to allow wheelchair users to remain seated in their personal mobility devices when they fly, as they can on buses and trains.

Between the hassle, potential injuries and damage to wheelchairs stowed alongside luggage, people who rely on wheelchairs for mobility, advocates and the U.S. transportation secretary, argue it’s time to make air travel more accessible so people living with disabilities have a more equitable flying experience.

“It’s not something that’s going to take weeks or days because obviously some cabin reconfiguration might have to be done … I just want to see progress.”

In an email statement to CBC Toronto, Air Transat apologized and said it is in contact with Glasbergen to discuss how to improve future travel experiences.

“Transfer services on the ground are handled by a third-party contractor and we are actively investigating this incident to avoid any recurrence,” spokesperson Marie-Christine Pouliot wrote.

Toronto resident Melissa Graham, who lives with a mobility disability, says sitting in an airplane seat is hard on her body.

But the negative experiences passengers like Graham and Glasbergen face when flying extend beyond being required to sit in a seat.

Graham says her wheelchair was damaged twice on the same WestJet trip from Toronto to Winnipeg over the Canada Day weekend.

According to Graham, she noticed when she arrived in Winnipeg that one of the mud flaps that covered her electric wheelchair’s wheels had broken off, while the backrest she relies on for support and balance was damaged on the return flight.

WestJet confirmed that Graham has an “open claim” for damages, saying its service provider will contact her about resolving it.

“I’ve flown six times since last December, and I haven’t had a single flight where I’ve been able to feel completely comfortable.”

But that data only includes complaints to the regulator and not those when a passenger dealt directly with an airline.

While Canada-specific data isn’t available, the largest airlines in the U.S. lost or damaged at least 15,425 wheelchairs or scooters between the end of 2018 and June 2021, the Washington Post reported last year, citing data from the U.S. Department of Transportation.

For safety reasons, federal regulations currently require passengers who use wheelchairs to sit in airplane seats and most mobility devices must be stowed in the cargo hold along with travellers’ luggage.

The regulations require airlines to ensure properly trained staff conduct wheelchair transfers and reimburse passengers for the cost of repairing or replacing mobility devices that are damaged in transit.

CTA says no plane or mobility aid designs that would allow people to remain in their wheelchairs have been fully tested and certified to meet the air safety standards of the U.S. Federal Aviation Administration (FAA) — which Canada follows.

“Should wheelchairs and a wheelchair restraint system for use in the cabin receive certification, we would consider whether a regulatory amendment is appropriate,” CTA said in a statement.

Progress in the U.S.

Movement on the issue could soon come from south of the border.

Just last week, U.S. Transportation Secretary Pete Buttigieg said his department is working on a rule “in the months and years ahead” that would allow passengers to stay in their wheelchairs while they fly.

“We know this won’t happen overnight, but it is a goal we have to work to fulfil,” Buttigieg said at an event Tuesday.

Last September, a committee of experts convened by the U.S. Transportation Research Board (TRB) concluded a preliminary study into systems which use straps similar to a seat belt or other mechanism to secure a wheelchair to an airplane’s floor.

It found most airliners in use have a main boarding door wide enough for most personal wheelchairs, and that the interior of the most common models — the Boeing 737 and the Airbus A320 — would require only “modest” modifications to create an area where a wheelchair could be secured.

“The committee did not identify any issues,” the study said, that “call into question the technical feasibility of an in-cabin wheelchair securement system.”

The CTA says it is aware of the study and is monitoring the issue, but that more research is required.

Michele Erwin, founder and president of the Texas-based non-profit All Wheels Up, said her organization has been working with the airline industry and the U.S. government to prove that current-market wheelchairs and tie-down systems can meet the same safety standards as airline seats.

“What we have learned from our crash testing is that a wheelchair spot is technically feasible,” said Erwin.

In the wake of the TRB study, Erwin said the airline industry has been developing wheelchair spot concepts, some of which include a replaceable seat in the first row of a plane that can be taken out and put back in depending on whether a passenger on the flight requiring wheelchair accommodation.

“It’s not good enough to say that’s a safety issue anymore,” he said.