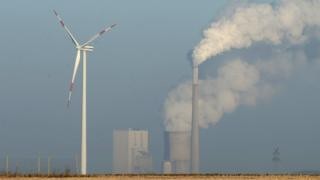 Chinese and EU leaders are to agree a joint statement on the Paris climate agreement saying it is “an imperative more important than ever”.

A draft of the document, seen by the BBC, stresses the “highest political commitment” to implement the deal.

It will be widely seen as a rebuff to the US, as President Trump deliberates on withdrawal from the accord.

The joint statement will be published on Friday after a summit in Brussels.

For more than a year, Chinese and EU officials have been working behind the scenes to agree a joint statement on climate change and clean energy.

The document highlights the dangers posed by rising temperatures, “as a national security issue and multiplying factor of social and political fragility,” while pointing out that the transition to clean energy creates jobs and economic growth.

“The Paris Agreement is proof that with shared political will and mutual trust, multilateralism can succeed in building fair and effective solutions to the most critical global problems of our time. The EU and China underline their highest political commitment to the effective implementation of the Paris Agreement in all its aspects.”

Both sides say they will step up action to and “forge ahead with further policies and measures” to implement their national plans on cutting carbon. Significantly, both the EU and China agree that they will outline their long term low carbon strategies by 2020.

“The EU and China are joining forces to forge ahead on the implementation of the Paris agreement and accelerate the global transition to clean energy,” said EU climate commissioner Miguel Arias Cañete.

“No one should be left behind, but the EU and China have decided to move forward.”

Why does Trump want to leave climate deal?

Climate change, or global warming, refers to the damaging effect of gases, or emissions, released from industry and agriculture on the atmosphere.

The Paris accord is meant to limit the global rise in temperature attributed to emissions.

To date, 147 out of the 197 countries have ratified the accord, including the US, where the accord entered into force last November.

The increased co-operation between the EU and China comes as reports indicate a further cooling in the US towards the Paris accord.

Several sources, quoted by US media, suggest that President Trump is set to pull out. The President himself tweeted enigmatically that he would announce his decision over the next few days.

This comes after the President failed to find common ground with other global leaders at G7 summit in Taormina, Sicily. In the wake of that meeting, German Chancellor Angela Merkel vented her frustration with the US position.

“The entire discussion about climate was very difficult, if not to say very dissatisfying,” she told reporters.

“There are no indications whether the United States will stay in the Paris Agreement or not.”

The new move by the EU and China was warmly welcomed by environmental campaigners, rattled by the prospect of the world’s second largest emitter of carbon pulling out of the globally supported agreement.

“If US-China climate cooperation gave birth to the Paris Agreement, now it is up to EU and China to defend and enhance it,” said Li Shuo, from Greenpeace.

“The pair has the potential to become the new driver for international climate diplomacy.”