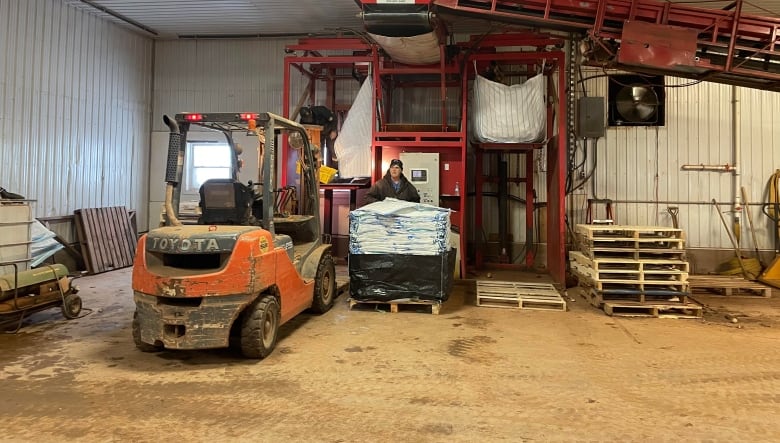 A P.E.I. company has brokered a deal to send as many as 700 tractor trailer loads of surplus P.E.I processing potatoes to a french fry plant in Alberta.

The deal was put together by Terry Curley of Monaghan Farms, who is part of a working group set up to deal with the potato wart crisis.

“Anything leaving P.E.I. is a help. There’s no question about that. We as an industry could have as many as 10,000 tractor trailer loads we’re going to have to destroy here whenever that may happen,” Curley said.

“This order here is probably in the range of 700 tractor trailers. So it’s a help, but not even 10 per cent of what we’re going to have to get rid of. The U.S. market is the big one.”

Curley said before the border was closed on Nov. 21, there had been interest from American companies in bringing in processing potatoes from P.E.I.

“Our local processor, as we understand it, have everything they need, and because of the strong growing year and the quality, as good as it was, there was an opportunity here to move potatoes to the Pacific Northwest,” Curley said.

“We did it about 10 or 11 years ago into Pasco, Washington, through the states. So they contacted us and we were asked to help put this together.”

It’s a help, but not even 10 per cent of what we’re going to have to get rid of— Terry Curley, Monaghan Farms

Because of the export ban, the Island potatoes will head to Taber, Alta., instead, to a plant owned by Lamb Weston — one of the world’s largest processors of frozen french fries, with headquarters in Idaho.

“The only reason we are getting into the western provinces is they went through a drought, and they don’t have the potatoes and that’s opened up a market,” Curley said.

Monaghan Farms sells potatoes that are processed into potato chips, so it has a quality control lab and other equipment to make the Alberta deal possible.

Curley, along with his son Derek, have started visiting warehouses, talking to growers and bringing back samples for testing.

He said the potatoes have to meet rigorous standards set by the french fry manufacturer.

“The first and foremost thing would be the colour. We will fry them for the colour specs that a french fryer needs,” said Curley.

“We have fryers, and sugar analysis machines, and things for measuring the gravity of the potatoes.”

Curley said the Alberta deal won’t help growers who have warehouses full of table stock and seed potatoes, which can’t be made into french fries.

“Those varieties won’t work for processing because they were stored in too cold a temperature and they weren’t grown for the french fry market, so they won’t colour,”  Curley said.

“If they don’t colour, they won’t make what this company is looking to do. So it has to be really good colour and, unfortunately, the others won’t work.”

One of the growers who will benefit from the Alberta deal is Brandon MacPhail of MacSull Farms.

“Oh, it’s great, considering everything that’s going on, to be able to move some of this extra stuff into the market that they were destined for to begin with,” MacPhail said.

“I’m glad that somebody’s going to get to use them, and we’ll get a decent price for some stuff. It’s a few less potatoes that might not end up in a field.”

It’s a bit bittersweet that I’m able to move some, but I have neighbours that can’t move anything— Brandon MacPhail, MacSull Farms

MacPhail also has a warehouse full of table stock potatoes with nowhere to go.

Still, he considers himself fortunate.

“I’m lucky, I have processing. A lot of these other guys are all seed, and they are export seed, and they’re all table, and they don’t have anything else to lean on right now,” MacPhail said.

“It’s a bit bittersweet that I’m able to move some, but I have neighbours that can’t move anything.”

MacPhail said that like so many other growers on P.E.I., he is starting to plan what he will do with those surplus potatoes.

“I’d say if we get some cold weeks coming here, later in January or February, some will end up in the field, I’ll have to do my part and get rid of a few,” MacPhail said.

“If anybody’s going to haul some to the field, that might as well be me because I’m lucky enough to have stuff moving.”

Curley said they will be shipping the potatoes by truck, for now, because of concerns about sending them by rail to Alberta during the winter, and potentially freezing entire shipments.

He said he hopes the shipments will continue until the end of June, with two truckloads a day for now, increasing to four to five a day in the coming weeks.

A new packing line will be set up at nearby P.E.I. Potato Solutions, to help with the Alberta deal.

Curley said growers will be paid the same price they would be getting from Cavendish Farms, and he estimated between 25 and 50 farmers could benefit from the deal.

“We know there’s a lot of potatoes there, but we’re going to do our best to make sure we can move as many as we can,” Curley said.

“I think everyone’s pleased. I mean, it’s been a pretty negative situation here since October, any positive news we can give the better.”

The P.E.I. Potato Board has estimated the value of the potatoes that are now in market limbo because of the export ban at $120 million.