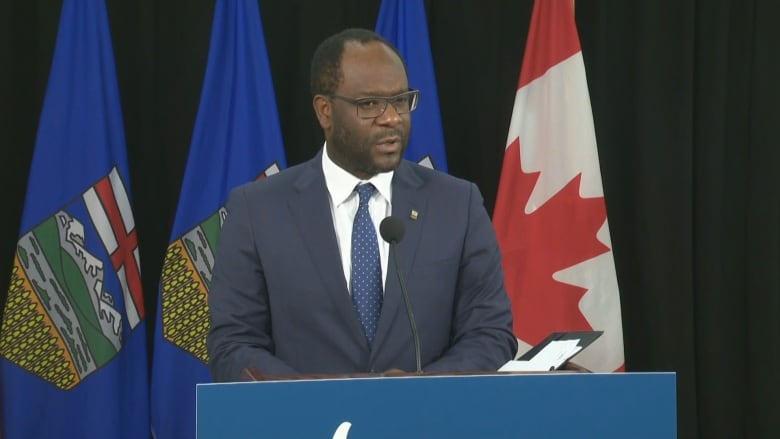 Alberta Premier Jason Kenney says he’s asked Justice Minister Kaycee Madu to “step back” from his job while an independent review examines if there was interference in the administration of justice after Madu phoned the Edmonton police chief about a traffic ticket.

In a late-night announcement on Twitter, Kenney said that Alberta Energy Minister Sonya Savage will act as justice minister and solicitor general during Madu’s leave of absence.

I have spoken with Minister Madu about the March 10 incident reported in the media today.<br><br>I conveyed to him my profound disappointment in his decision to contact the Edmonton Police Chief after receiving a ticket for a traffic violation.<br><br>1/5

The premier said he will appoint an independent investigator to review relevant facts and determine whether there was interference in the administration of justice in this case. The findings of the review will be made public, he said.

“In the interim period, I have asked Minister Madu to step back from his ministerial duties,” Kenney wrote.

Kenney said Madu told him that he did not ask the chief to have the ticket rescinded, and it wasn’t his intention to interfere in the case. Madu also paid the ticket.

In a statement to CBC News Monday, prior to Kenney’s announcement, Madu confirmed the incident and that he had already paid the ticket in full. However, he said he told the officer who pulled him over that he disagreed with the fine and that his phone was in his pocket.

He said he called McFee because he wanted to ensure he was not being “unlawfully surveilled” following a controversy surrounding the Lethbridge Police Service.

At that time, the provincial government was preparing to step in after reports of unlawful surveillance and database searches conducted by Lethbridge officers on NDP MLA Shannon Phillips during her time as environment minister.

Madu, who is Black, said he wanted to raise concerns about racial profiling with the chief.

“Chief McFee assured me that that was most definitely not the case, and I accepted him at his word…to be abundantly clear, at no point did I request that the ticket be rescinded. I would never do that.

“However, in that particular call, I regret raising the issue at all with the Chief McFee,” Madu said.

McFee has confirmed that Madu did not ask to get out of the ticket, and that Madu expressed concern about people of colour being stopped by police and political tension with the Lethbridge Police Service.