Ozubulu massacre: Let the police do their work – Punch Newspapers 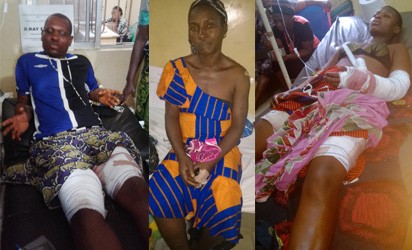 The Nigeria Police Force is established by Section 214 of the Constitution of the Federal Republic of Nigeria, 1999. The powers and duties conferred on the police by law are essentially for the maintenance of law and order and as an executive agency, to give vent to the constitutional aphorism that the security and welfare of the people is the primary purpose of government. It is vested with powers to proactively prevent crime and when crime is committed, to investigate, apprehend and prosecute offenders. Again, it is expected to devise procedures to give Nigerians a guarantee of non-repetition for certain types of crimes and provide a closure for victims and families who have been traumatised by crime.

Nigerians woke up last Sunday to the sad news of the massacre of the innocent worshippers, who were exercising their fundamental right to freedom of thought, conscience and religion and to worship God in a way and manner they deemed fit. Their worship in the St Phillips’ Catholic Church at Ozubulu, Anambra State was not in any way injurious to the rights of other citizens. As such, their mode of worship could not have come under the claw back and derogation clauses provided in Section 45 of the Constitution. But gunmen had another idea as over 12 of the worshippers were met with certain death and a number of others sustained several degrees of injury and grievous bodily harm.

The natural expectation of all well-meaning Nigerians was for the police with the support of all tiers of government especially the Anambra State Government where Governor Willie Obiano is the chief security officer, and other law enforcement agencies to go full swing to investigate and apprehend the offenders and bring them to justice. The event was reported to have happened during the proceedings of a 6am service. The media was awash with pictures of the dead loaded into an open vehicle and this was done without the least respect to the sanctity of lives. Pictures of blood spattered all over the church and the dead were all over the print, electronic and social media. Evidently, people were coming in and going out of the crime scene. Media reports indicate that the police did not cordon off the scene and it seemed that no forensic evidence about footprints, fingerprints and the type of bullets used was relevant to the investigations.

Just less than two hours after the killings, both the state governor and the police had come to the conclusion that the massacre was a fallout of a drug war, a misunderstanding between brothers or people of the same town. How they arrived at such a conclusion is only known to the police and the governor. They have yet to make the basis of their conclusion known to the public. Pictures of a certain young man, nicknamed “Bishop”, who it was reported built and donated the church have dominated the media. He is virtually being paraded “as the mastermind of the crime”. However, he is reported as having lost his father in the shooting and the assassins were stated to have come for him. When they did not find him in the church, they now shot some other persons. Thus, the storyline is that this is about a drug crime gone sour and which started from South Africa while Nigeria is simply “enjoying” the fallout.

However, something is not adding up: Where is the picture of the leader(s) of the other gang who allegedly came for the “Bishop”? What is his name or the names of the other leaders? Before this incident, were there criminal proceedings either at the investigative level or in court against “Bishop” in Nigeria or in South Africa or indeed anywhere at all, for alleged murder, drug peddling or any other crime? On what basis then did the police and the governor arrive at their hasty conclusion? It appears from the speed with which they made their statement that they knew about this crime before it happened. The immediate poser is: why did they not proactively stop the massacre? Why have we reduced policing to reliance on street gossip in a matter as serious as murder? Must we trivialise very serious matters? A serious police that heard this kind of stories from the locals should have considered themselves as in possession of a possible lead and angle to their investigation; not a conclusive angle. As investigations unfold, other angles will emerge. If the police limit their investigation to this single line mindset, then criminals can easily commit crime and set investigation on a wild goose chase. If police investigations turn out to prove the falsity of this storyline, how will the police face the people to tell them the truth about their investigation? Again, having adopted this position, would the police not be working from answer to the question simply to justify the first goof?

The way and finality of Obiano and the police proclamation set the tone of the game over; no need for any serious investigations. We know what happened; it did not start here. Thus, murderers can get away with murder. In other climes where such serious crimes happen, the police proceed with caution, engage and brief the media at appropriate times and carry the people along because what happened is sacrilegious and the first of its kind in recent memory. Media reports have it that some suspects have been arrested and that is what we have heard so far. Nigerians are hoping that this case will not simply be swept under the carpet as has happened in previous big crimes.

Instead of the media holding the state to account for the loss of lives, it has instead gone on a frenzy of its own with unfounded stories heard from the same street gossips without any in-depth investigative reporting. Which media house has sent a team to South Africa to connect the dots and check the veracity and accuracy of the stories making the rounds? Again, the Catholic Church has come under attack for accepting gifts purportedly from alleged criminals and drug barons based on the story making the rounds whilst some have found it as a good opportunity to brand and stigmatise a certain section of the country for purported love of money! All these are happening based on unverified hearsays. Investigations are purportedly ongoing and no conclusions yet. But the police and the governor provided the foundation for this mischief.

We need professional policing whilst state officials such as governors should in future exercise restraint in making magisterial pronouncements not based on any empirical evidence. May the souls of those murdered in Ozubulu in perfect peace.